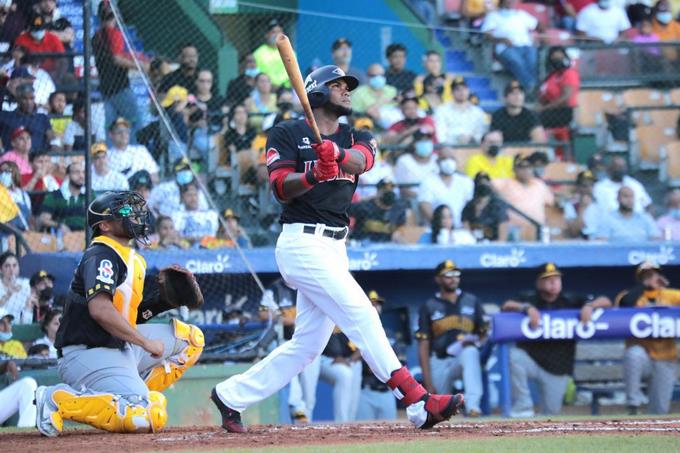 Home runs by Franchy Cordero and Aderlin Rodríguez produced four runs this Saturday for the Leones del Escogido to beat Águilas Cibaeñas 4-2 this Saturday at the Quisqueya Juan Marichal stadium.

In the third inning against starter José Quintana, and with runners on third and second, Cordero hit the drive through right field, which traveled 390 feet and left the bat at 98 miles per hour, scoring the first three touchdowns of the long-haired ones.

In the eighth, the locals added one more to Edgar Escobar, who Rodriguez hit a solo home run 422 feet away to make the game 4-2.

The Eagles scored their first run in the second inning against David Kubiak, after Daniel Santana’s triple to left field and a double to right field by Robel García. In the fourth, the visitors made one more in front of Kubiak, a double product from García to the right field and a single from Leody Taveras to the left field.

Kubiak (1-0) was the winning pitcher, acting in 5.1 innings of two touchdowns, six hits and two strikeouts. The defeat was for Quintana (0-1), by tolerating the three chosen lines. The save was scored by Steven Wilson (2) by shooting the ninth blank.

With the victory, the Chosen One improves their record to 7-7, while the Santiago players 8-6.

The Lions will continue at home this Sunday to receive the Toros del Este at 4:00 in the afternoon.

Prior to the match, the Scarlets paid a special tribute to team legends who in the late 1980s and early 1990s were part of the champion teams of the Escogido. On behalf of those escogidistas, Junior Noboa and Wilfredo Tejada made the launch of honor.

The Machine could add one more Final to its list before the 2022 Opening starts. ... Read more