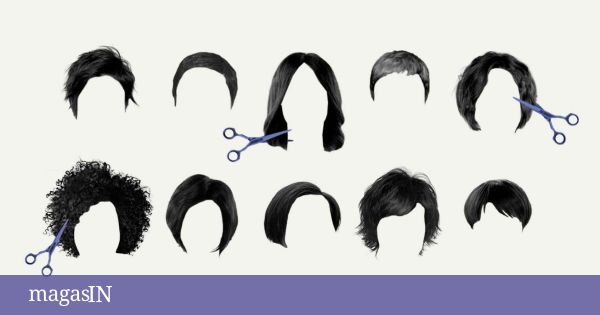 Hair (or its absence) encompasses a thousand meanings. Like choice or imposition, the act of cutting it marked and continues to mark the history of women. Between prejudice and fascination, its symbolic power does not decrease.

Shaving or cutting one’s hair became a symbol of freedom, a political tool and even, more broadly, a clear sign of the reappropriation of the female body.

“Everything related to hair has a strong visual impact. Therefore, any change we make to it is sending a deep and very personal message. We do not have to think only of the most drastic changes, since even the most subtle details contribute to moving consciences” recalls Mª José Llata, director of Peluquería Llata ​​Carrera, in Santa Cruz de Bezana (Cantabria).

Eva Soto, psychologist and professor of Deusto Salud adds in this sense that “it usually always has a meaning behind it. Hair is a very identifying aspect and greatly marks our image. Many times, we use that change of image to break with some pattern or some vital stage”.

We review, with experts, the scope of the act of shaving or cutting one’s hair, between stylistic choice and symbol.

“Throughout history, hair has had different meanings that range from magical, religious to power and sexuality. In other words, hair expresses different symbolisms according to the time” clarifies Dr. Laura Zambrini, sociologist, specialist in fashion and gender studies and professor in charge of the Department of Sociology of Fashion at the University of Buenos Aires.

“At different times in history, hair has been a way of expressing ideology, for example, think of the rock bands of the 60s, punk and more recently, the mass haircut protests from the what happened in Iran,” adds the expert.

Historically associated with femininity, long hair, in addition to being normative, also came to capture an idea of ​​traditional beauty. The Salem witch hunt, dated 1692, is a case in point: the skulls of the accused women were shaved off, to identify them as witches “under the direct influence of the devil.”

Even so, its connotation is deeply related to culture: “in some traditions, such as Sikhism, they never cut their hair because they link it to their respect for the natural cycle of life and their spiritual commitment to it.

Instead, in Hinduism, there is the tradition of the Chudakarana. It is just the opposite. You usually go to a temple to cut your hair and offer it to the divine. The symbolism behind this action is that when you cut your hair, you shed your personality and ego, thus undertaking a new spiritual commitment” Eva Soto clarifies.

a symbol of freedom

Women from EL ESPAÑOL get their hair cut by Iranians

Helped by the various feminist waves, cutting your hair recently became an act of rebellion. The death of Mahsa Amini, after a violent beating by the Moral Police for not wearing the veil properly in Iran, sparked a wave of outrage in 2022.

The event propelled a popular movement, not only in the country itself, but also internationally: thousands of women took to the streets to demonstrate against oppression and started a movement, called #hairforfreedom, on social networks, recording videos on the that remove their headscarves and cut off a lock of hair in protest.

Precisely, in Iranian folklore, women cutting their hair is a symbol of protest against the injustices committed by the oppressor. “Hair is a very representative element of women and herein lies its great power when it comes to becoming a symbol of freedom that manages to transcend time, borders and cultures, as is being demonstrated,” says Charo García, director of Ilitia Beauty & Science, in Balmaseda (Bizkaia).

“By cutting a lock with scissors, women assume power and control over themselves, and send an unequivocal message to the regime in front of them and to the entire world. They say enough, enough to the injustices and repressions, to the lack of freedom. They say that it is time to cut with the old, with what is useless, in order to grow stronger.“adds the expert.

In any case, “if the haircut is done consciously and thoughtfully, it usually involves a moment of liberation and change. Therefore, on an emotional level it would be empowering the person by feeling freer and with greater determination in those aspects that you had proposed. If it is done for fashion or because third parties have proposed the change. It does not have the same effect and can generate more insecurity in the person” clarifies Eva Soto.

Cutting your hair also became, throughout history, in its own political instrument. Changing your hairstyle or decorating it can convey a strong message: “you just have to remember the little barrette with which the actress Meryl Streep decorated her updo at the 2018 Oscars, on which you could read TimesUp’against sexual harassment in the film industry” explains Mª José Llata. In 2014, British designer Vivienne Westwood shaved off her orange hair in protest of the fight against climate change.

Actress Rose McGowan shaved her head as a claim. Its objective? Denounce sexual violence and sexist behavior suffered by actresses and women in general. She confessed that she had always been recommended to keep her hair for work: “They told me I had to have long hair or the casting directors wouldn’t want to fuck me. Well, fuck Hollywood.”

In 2008, Emma González, a young survivor of the Stoneman Douglas High School shooting in Parkland, Florida, became a a symbol of the anti-gun movement in the United States. Shaved head and raised fist, he defied all prejudices.

Shaving, as a stylistic and emotional choice

His choice, as a stylistic bet, continues to be controversial, however: “If the haircut is determined by an internal action, it already shows a great personality and strong self-esteem and self-concept. So surely these people will not care about the opinion from third parties.

But the exercise we should do is the reverse. That is, why should we question someone for their personal image? I think our attitude should be the opposite. Support and accept the person in the change that he wants in her life “explains Eva Soto.

Many celebrities opted for this aesthetic change, contributing to the change of the pre-established codes of femininity. In 2010, Emma Watson, inspired by Mia Farrow, surprised with her pixies (whom he returned to in 2022 to star in Prada’s “Paradoxe” perfume campaign). “I can’t believe all the commotion that this haircut has caused. It’s crazy,” the actress said then, assuring that she had been wanting for years try this hairstyle. Kristen Stewart, Cate Blanchett, Cara Delevingne… also went for the extra short cut.

Many actresses adopted this hairstyle for professional reasons, strengthening its trivialization: Sigourney Weaver shaved her head for the filming of alien 3Demi Moore for the film G.I. JaneNatalie Portman for v for Vendetta…

“At present, the fact of cutting one’s hair is often interpreted as a kind of rite of passage or personal renewal for the future. Most of the time it is done taking into account the trends of the moment. This is linked to the way in which we have socially learned to build our image to insert ourselves into social life.

In other words, there are aesthetic codes imposed by fashions that express the values ​​’required’ at a time to be socially accepted. This is due to the fact that fashions function as mechanisms of social integration and haircuts are also part of these languages ​​of appearances.

However, these fashions are not neutral, but hair also constitutes a strong gender mark that reinforces stereotypes about what is feminine and masculine. Precisely one possible way of transgressing the imposed gender norms is by subverting those aesthetic codes.

For example, in the 1920s, one way of expressing the need for women’s liberation was by incorporating pants and short hair for women. And while binary gender stereotypes are currently being questioned, there is still a certain prejudice regarding the use of short hair in women. This is due to the political dimension of the bodies behind fashion” recalls Laura Zambrini.

Between stylistic choice and act of rebellion, in 2007, the singer Britney Spears left the world speechless by shaving her head live. The artist was then living through a time of unprecedented crisis and depression.

“When we talk about big image changes, as I have already commented before, many times they are linked to other changes in our lives. That haircut, color change, among others, we link it as a ritualization or an expression of the internal change we are experiencing.

Therefore, if there could be changes in our behavior. Before you pointed to prejudices. Therefore, it already determines the courage of the person to face this type of situation in which perhaps they can be judged or criticized “Eva Soto finally points out.

A break with the past?

Of pixies Katy Perry’s platinum, after breaking up with Orlando Bloom, to Cameron Díaz’s dark hair, after the end of her story with Justin Timberlake going through the long bob (which turned out to be a wig) of Aitana, when separating from Miguel Bernardeau… there are many examples that a change of hairstyle is also a sentimental symbol.

“Seeing ourselves and feeling good is essential to be able to face a complicated moment in life, such as a breakup. A change of look helps us to clearly visualize this new stage that we are beginning and enter into it with more strength and security” says Mª Jose Llata.

“It is a gesture loaded with symbolism, because we cut hair but also what we no longer want. In addition, giving ourselves some time to care for ourselves, in the hairdressing salon, will undoubtedly bring us well-being and comfort us” concludes the expert.

Previous Interview with Carolina Escandell, Minister of Social Welfare of Ibiza
Next This is what Minecraft players are asking for the most for the 1.20 update