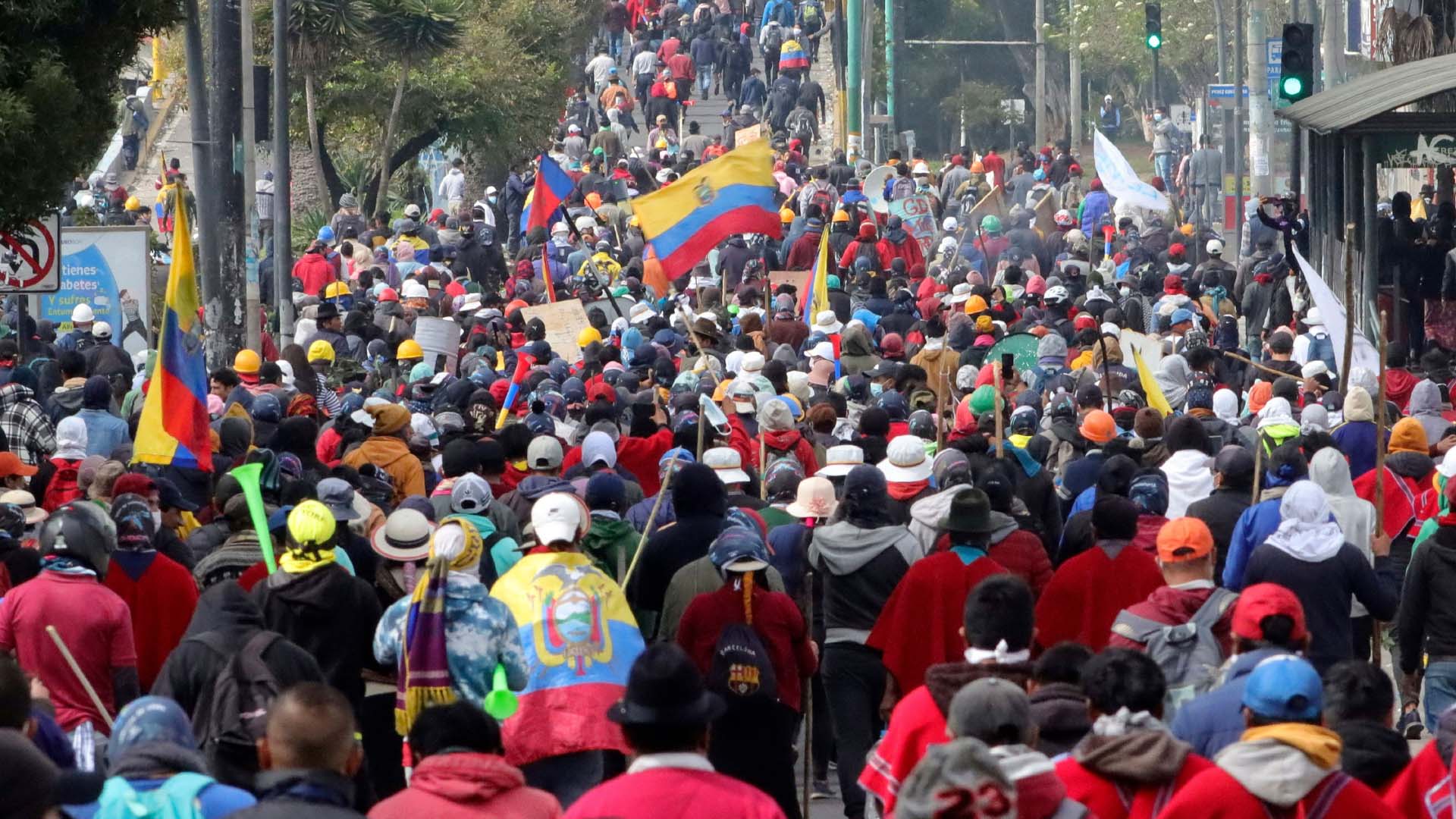 (CNN) — Ecuador entered its fifth day on Wednesday under the state of emergency, decreed by President Guillermo Lasso due to the “serious internal commotion” in several provinces of the country, where for ten days there have been clashes and road closures in the middle of a large nationwide protest that has been going on for more than a week.

So far, the number of deaths amounts to four people since the beginning of the demonstrations, after the Ecuadorian National Police reported this Wednesday of a new death in the context of the protests.

lasso ad on Friday the state of exception for the provinces of Cotopaxi and Pichincha through decree 455, and this Monday it repealed and replaced it with decree 459, which also includes the provinces of Imbabura, Chimborazo, Pastaza and Tungurahua and has a duration of 30 days. The National Assembly was still debating this Monday night the first decree.

The measure comes in the midst of a great national mobilization promoted by the Confederation of Indigenous Nationalities of Ecuador (Conaie) against the Government, which began on Monday, June 13.

“Last night I called for dialogue and the response was more violence. There is no intention to look for solutions. They say they fight for the cost of living, but close roads causing shortages, rising prices and speculation. They say they want to improve health services, but they prevent the passage of ambulances, putting our sick brothers and sisters at risk of death,” Lasso said during his speech on Friday.

Do the protests seek to destabilize the Lasso government? 0:57

The president insisted that the acts of violence that have occurred since Monday have forced him to declare a state of emergency “to defend the capital and defend the country.”

“There are good people who are marching to demand just causes. Demands that we have not yet been able to attend to,” the president added.

Meanwhile, the indigenous movement set a series of conditions on Tuesday to resume dialogue, including the demilitarization of certain sectors of Quito and the repeal of the state of emergency.

But why is the country involved in protests? These are the keys.

The origin of the protests

The Conaie, which has been leading the national mobilization for nine days in some provinces, demands that the government reduce fuel prices, address the unemployment problem, regulate the prices of farm products and combat crime, among other demands.

Ecuador: Conaie will not dialogue with Lasso and protests continue 6:39

The Conaie leadership insisted throughout Friday, the day Lasso announced the first state of emergency, which will maintain the strike. His president, Leonidas Iza – arrested on Tuesday during the protests and later released – called for a peaceful demonstration and assured that his mobilization does not have vandalism overtones.

On Thursday, Iza had said that she will not accept a dialogue where there are no results and assured that she would coordinate the mobilization of indigenous bases to Quito if there are no answers to her requests.

Friday, the fifth day of protests in several provinces, was marked, like other days, by road closures, especially in the provinces of the Sierra and, as night fell, there were mobilizations in the historic center of Quito that ended in clashes in the Plaza de Santo Domingo between police and protesters.

The National Police reported on his Twitter account that, according to firefighters, three people had fallen into a ravine in a sector of Guayllabamba, about 30 kilometers north of Quito, and one of them died. At the moment they did not offer more details.

What do the state of emergency decrees say?

Decree 455 includes the mobilization of various institutions, the deployment of coordinated operations between the Police and the Armed Forces, limitation of crowds, curfew that restricts freedom of movement from 10:00 p.m. to 5:00 a.m. in the District Metropolitan of Quito, to preserve citizen security and public order.

But Lasso repealed that decree and replaced it with 459, which extended the state of exception to more provinces, reaching a total of Cotopaxi, Pichincha, Imbabura, Chimborazo, Pastaza and Tungurahua.

“This declaration is given due to the violent actions that have altered public order, causing situations of manifest violence that put the safety of citizens at risk and threaten the proper functioning of strategic sectors vital to the country’s economy, as well as also the possibility of radicalization of the measures by public declarations that call for indefinite non-peaceful protests,” the presidential decree document states.

What is said in the National Assembly

Meanwhile, this Monday the Assembly continued with the session in which different legislators spoke out for and against the state of emergency in the country.

A protester paints a graffiti that reads Freedom for political prisoners, in Quito, on June 16, 2022. (Credit: CRISTINA VEGA RHOR/AFP via Getty Images)

The assemblyman of the Correista bloc of the Union for Hope Movement (UNES), Cristóbal Lloret, said that the repeal of decree 455 is “a prank” by the Government, while the assemblyman Ana Belén Cordero stressed that there is no need to debate something that is already repealed.

The National Police rejected the intentions to repeal the state of exception that promotes a curfew from 10:00 p.m. to 5:00 a.m. in the 6 provinces and the security coordination between the Armed Forces and the Police.

“It would be irresponsible to lift the state of exception, when we have a history of serious damage, and it is not that they are infiltrators, but that they are part of articulated groups, where there would be some actors who could be financing these protests,” the Police said.

Lasso maintains that they want to overthrow him

In his Twitter account, President Guillermo Lasso, through a video, responded that he will not allow disorder in the protests and targeted those who, according to him, want to remove him from power.

“They seek chaos, they want to throw out the president, I am here, I am not going to escape”, said in a video he posted on that social network.

What measures have been promised to stop the crisis

The president’s announcement on Friday, when he revealed the first state of emergency decree, was accompanied by a list of decisions on economic matters, in order to alleviate what he called “the difficult situation of many families.” The measures announced are the following:

The Ecuadorian State Attorney General’s Office reported Tuesday that its headquarters building in Quito is under attack. In a statement published on its social networks, the institution indicated that it asked the Police and Armed Forces to reinforce the security of the place to prevent new incidents from occurring.

In addition, they affirmed that actions were carried out to protect the officials and the files and sensitive information they handle to avoid putting the ongoing investigations and processes at risk.

“The State Attorney General’s Office recognizes the right of citizens to protest, but rejects any act of vandalism, especially if it puts the integrity of people and State property at risk, and reiterates its commitment to maintain access to justice,” reads in the official note.

Four deaths have been reported so far.

In total and so far, four have died in the context of the protests, according to the authorities.

In a statement, the National Police said that the last death occurred on Tuesday in the province of Pastaza, in the Amazon region, “as a result of handling an explosive device.” The Police clarified that they do not use this type of material to control public order and “even less so in peaceful citizen marches and demonstrations.”

The institution said that the case will be investigated by judicial authorities and that it will provide support to clarify all the violent incidents, in addition to noting that it acts “with unrestricted respect for human rights.”

The Ministry of Health reported Tuesday in a statement that two people died last Sunday due to the obstruction of the passage of ambulances. Previously, the Police had reported this Monday that a person died after falling from a ravine in a sector of Guayllabamba, about 30 kilometers north of Quito.

With information from Florencia Trucco.