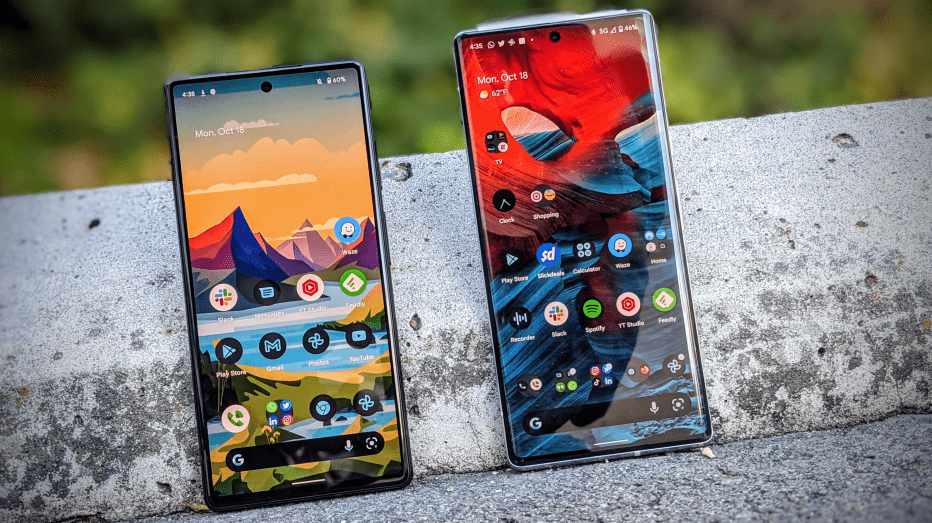 Google’s Pixel 6 and Pixel 6 Pro are very similar phones in many ways, but there are some different features that could make one of these devices better for you than the other.

The two phones have the same design concept that focuses on a large module that runs horizontally through the back of the phone, while on the front they have an integrated camera through a hole.

However, the Pixel 6 Pro is a cell phone that looks and feels more premium than the Pixel 6, mainly because it has slightly smaller bezels, but also because instead of having a flat screen it has a screen with a slight curvature on its edges. side edges.

Plus, the weight balance also makes it feel a bit more solid, and while the Pixel 6 has matte edges, the Pixel 6 Pro has glossy edges.

In general, the two phones have the same specifications and features, including Google’s Tensor processor that has 8 cores with a maximum speed of 2.8GHz, Android 12 with its exclusive functions, they have the promise of being one of the first phones to be updated. to the next generations of Android, they include IP68 water resistance, wireless charging support, and reversible wireless charging.

The differences come through different details, such as more RAM, Ultra-Wideband, maximum storage, battery and cameras.

In RAM the Pixel 6 Pro has 12GB, while the Pixel 6 has 8GB. Although this is an important difference, in general use it is difficult to notice a difference even when swapping between multiple recent apps. It even seemed to me that the system closes apps faster compared to the Galaxy S21 Ultra and the OnePlus 9 Pro.

The Pixel 6 Pro also has an Ultra-Wideband that allows you to locate objects with this technology more precisely, as well as to be able to communicate with different devices to perform different tasks, such as unlocking a car when you approach. As for storage, the two Google phones have versions of 128GB and 256GB, but the Pixel 6 Pro can be purchased with up to 512GB.

On the other hand, the Pixel 6 has a 4,614mAh battery and the Pixel 6 Pro 5,003mAh. In general use, the two phones manage to offer a full working day of frequent use and there is not a very big difference in the durability that one offers compared to the other. However, in my experience the Pixel 6 managed to last a little longer more often, possibly due to having a smaller screen, which also has a lower resolution and a lower refresh rate.

Both phones have the same 50 megapixel main camera that performs well in almost any condition. Similarly, the 12 megapixel wide-angle camera is also the same on both phones and offers good results.

The difference in the rear cameras is that the Pixel 6 Pro has a telephoto that allows you to obtain better results of photos that you are trying to capture with zoom.

Without thinking about the zoom offered by that telephoto, the results offered by the cameras are the same and without a doubt they are one of the best cameras you can find on the market, not only for taking photos but also for recording video. Still, I still prefer the wide-angle camera on the Galaxy S21 Ultra and OnePlus 9 Pro, but on the main camera Google certainly did a very good job.

In the front cameras, the Pixel 6 Pro also has an 11.1 megapixel camera that allows you to switch between a regular angle to a wide angle to capture more space from the same distance. This camera not only allows you to do that, but it also manages to get more detail in the faces.

The two Pixel 6 are very similar and I think that on many occasions it can become a matter of preference and habit. If you are one of those who generally go for the best of the best, without a doubt you will lean towards the Pixel 6 Pro and I think it is a better cell phone.

However, considering that it costs USD $ 300 more than the Pixel 6 I think that most should consider that cell phone first because the differences in general use are very small and the most important thing could come mainly in the telephoto and in a slightly more design refined.