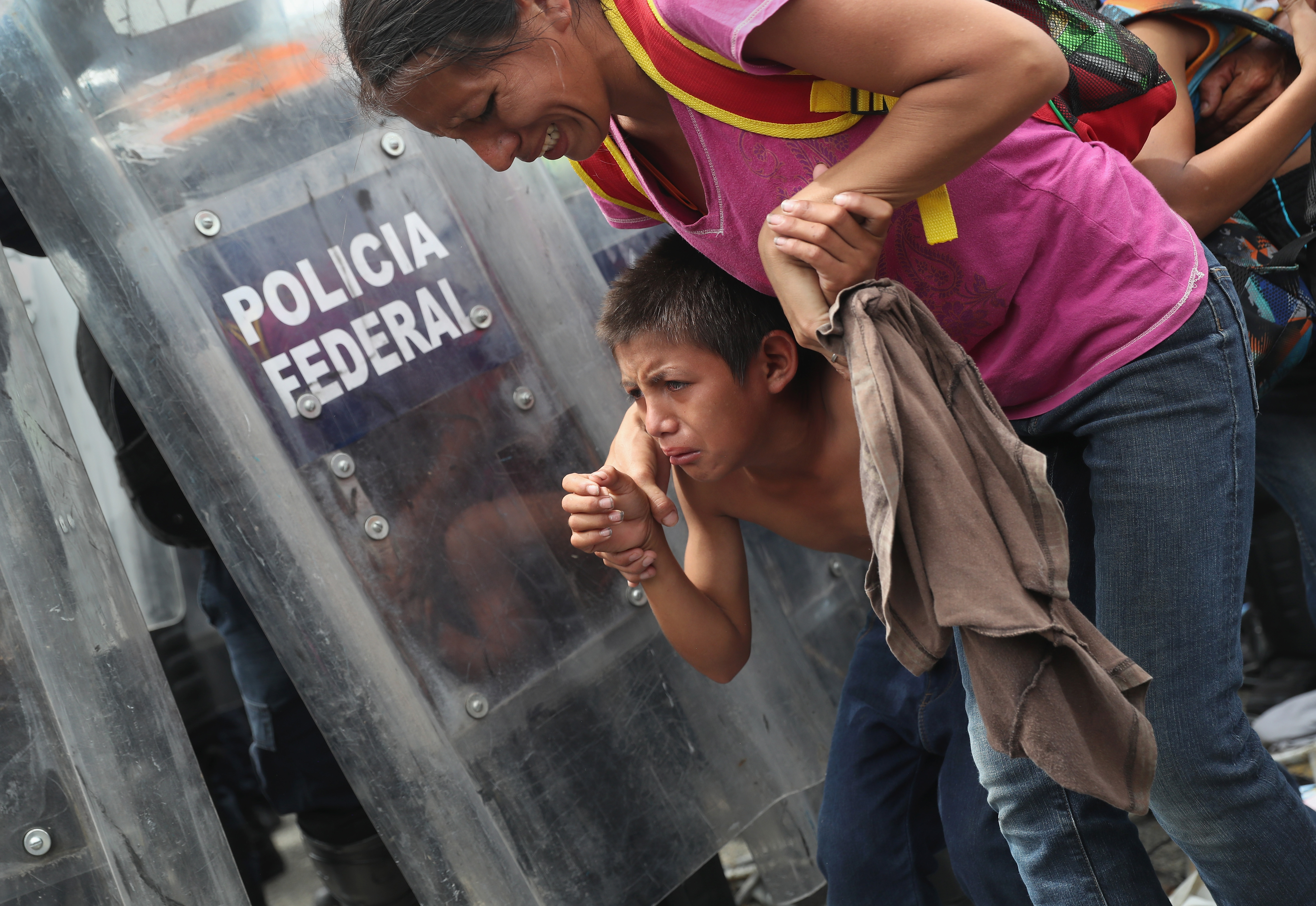 The first time his name was mentioned was on June 10, at the end of the Summit of the Americas held in Los Angeles, California. A White House document revealed that the United States will announce a Multilateral covert operation to disrupt human smuggling networks throughout the hemisphere.

It is, according to the document, the first campaign of its kind, “unprecedented in scale, to disrupt and dismantle human smuggling networks in America.” What no one knew until then was that the operation had started at least eight weeks before (two months) in total, secret.

The operation, baptized with the name of ‘Sting’ (sting or sting), is led by the Department of Homeland Security (DHS) and It is made up of 1,300 people (including agents, employees and officers) throughout the region. And so far “more than $50 million has been invested to support these activities,” the press release reveals.

The government assures that until the end of May the efforts have produced approximately 20,000 total disruption actions including: arrests and prosecutions, seizures of property such as homes and vehicles used to hide and smuggle people, and criminal investigations.

According to DHS analysts, these actions have led “to 900 fewer migrants arriving at the Southwest (United States-Mexico) border each day.”

The White House maintains that “we are just beginning” and indicates that “the United States will seek to expand efforts with other governments in the region to improve the exchange of information, develop capabilities and advance criminal investigations.”

They already saw agents walking with the last caravan

“We saw them. They walked alongside us all the time, making themselves known, talking to people, instilling fear in the people who were marching,” says Luis García Villagrán, director of the Organization for Human Dignification, one of the organizers of the walk that this time managed to gather more than 10,000 migrants, most of them of Venezuelan origin.

The National Migration Institute (INM) of Mexico speaks of just over 7,000 and ensures that all of them received a 30-day migration permit that allows them to move around Mexico and regularize their stays, either through asylum or a humanitarian visa.

García reiterates that the migratory form “was only a gesture for them to go north and seek asylum in the United States.”

When asked how he knew that it was US federal agents who were marching with the caravan, García explained that “during the entire journey of about 40 kilometers from the Bicentennial Park of Tapachula to the outskirts of Huixtla, where the caravan dismantled, “they They told us who they were. First we thought they were journalists because they photographed usbut later we knew who it was.”

“One of them even told me that they were very aware of what I was doing and that the Mexican government had five open files (investigations) against me, one of them for assaults on the National Guard and another for illicit enrichment,” he said. the activist

He also specified that “all this is about a very perverse handling” of the reality of these people who arrive in Mexico in order to continue traveling north to seek asylum in the United States. This people he suffers, he needs help, they have nothing, they left everything behind and they are not respecting their most basic rights”.

“Imagine, it turns out that now belonging to a caravan turns out to be more dangerous than being a terrorist. Here there is a dangerous handling of all this, they are spreading information that immigrants are bad and that sows hatred, ”she assured.

When asked when the next caravan will leave, García Villagrán said that “enough is enough. Now I’m afraid of what they can do to me. I’m sick. I have already done my work and have helped many. I am a defender of human rights and I will continue to be, but I will no longer lead a caravan. I have to worry about the files (investigations) that were opened against me”.

They denounce that the military participate in the ‘Operative Sting’

the mexican newspaper the day He said on his website that the military participate in ‘Operation Sting’ and that one of its main objectives is to stop the caravans leaving Tapachula.

In this border city with Guatemala there are thousands of migrants from not only Central and South America, but also from Eastern Europe, Africa, the Caribbean and Asia, a veritable exodus of people fleeing their countries and heading to the United States in successfully seek asylum or enter undocumented.

Although the Mexican government has been operating as a containment plug, every so often thousands of people group together and circumvent all the security systems to start a trek north. The immigrants argue that the Mexican government it does not solve their migratory stay and that the caravans, at least, guarantee that they will obtain some type of permit to move and try to reach the southern border of the United States.

But from the document issued at the end of the Summit of the Americas, it is known that the Biden administration is deploying (or will deploy) hundreds of federal agents in Latin America to locate and disarm networks of people smuggling to the south of Mexico.

Mayorkas confirms the scale and scope of the operation

On June 11, one day after the statement sent by the White House acknowledging the operation, the head of US national security, Alejandro Mayorkas, gave an interview to the CNN network in which he said that “We have carried out a government-wide effort to attack smuggling organizations. It’s not just about DHS investigations, it’s not just about Customs and Border Protection (CBP). These are also agencies within the Department of Justice (DOJ) and, of course, our partners in Mexico.”

Mayorkas also said that “the scale and scope” of the operation “is unprecedented,” and that in the two months prior to the summit in which they have acted in secret they have arrested some 2,000 traffickers (coyotes) “which marks a 600% increase in police actions taken against such actors compared to efforts in previous years.”

The DHS, for its part, explained that in April it launched a first-of-its-kind effort, “on an unprecedented scale, to disrupt and dismantle these human smuggling networks,” and that it had committed “more than $50 million and increased more than 1,300 people in Latin America and along the Southwest border” to curb human smuggling and stop the undocumented crossing into the United States.

Last week CBP reported that arrests of immigrants on the border with Mexico was 239,416, an increase of 2% compared to that registered in April. Of those, the Border Patrol said, “25% involved people who had at least one previous encounter in the previous 12 months, compared to a one-year average re-encounter rate of 15% for fiscal year 2014-2019.” .

The federal agency also said that the current restrictions on the southern border “have not changed” and that single adults and families who are found without authorization to enter or remain in the country “will continue to be expelled as appropriate,” mainly under Title 42 (expedited removals) and Title 8 of the Immigration Act (INA), which allows for expedited removals.

Title 42, a health policy dating back to 1944 and activated in March 2020 by the coronavirus pandemic, was eliminated by the Joe Biden government. But after a lawsuit filed by states governed by publicans, the measure remains in force.

How the operation to stop the caravans works

World Refugee Day: There are more than 100 million displaced people in the world, why are families fleeing?

The government reported that last week authorities from the National Migration Institute (INM) met with members of the United States Border Patrol and entities from Tamaulipas, Coahuila and Baja California, in the north of the country.

In the meetings “actions were evaluated to combat illegal human trafficking and to maintain safe, orderly and regular migration within a framework of respect for human rights,” he specified.

The report adds that the INM commissioner of the Ministry of the Interior, Francisco Garduño Yáñez, “carried out different coordination actions along the northern border with the purpose of maintaining safe, orderly and regular migration, with respect and safeguard to the human rights of those who enter, transit and leave the national territory”.

Although the document does not mention the operation revealed by the White House on June 10, it details that there were also working meetings between the INM commissioner and the Customs and Protection commissioner, Chris Magnus, “with whom he evaluated the combat tasks at the illegal trafficking of persons and, within the scope of their respective attributions, those corresponding to the reinforcement of border security between both nations”.

Mexico also noted that the meetings were part of multilateral cooperation, and that during the border tours “strategic perimeters within the territorial limits of the towns of Reynosa, Tamaulipas, Mexico, and McAllen, Texas, United States” were visited. , the main undocumented crossing points.

Delegates from both governments also visited the city of Piedras Negras, Coahuila, areas of the Rio Bravo, El Paso (Texas) and the region of the state of Arizona bordering Mexicali and Baja California, on the Mexican side.

The tour ended in Tijuana, Baja California, where the remodeling of the INM area at the International Airport was supervised, concluded the press release.