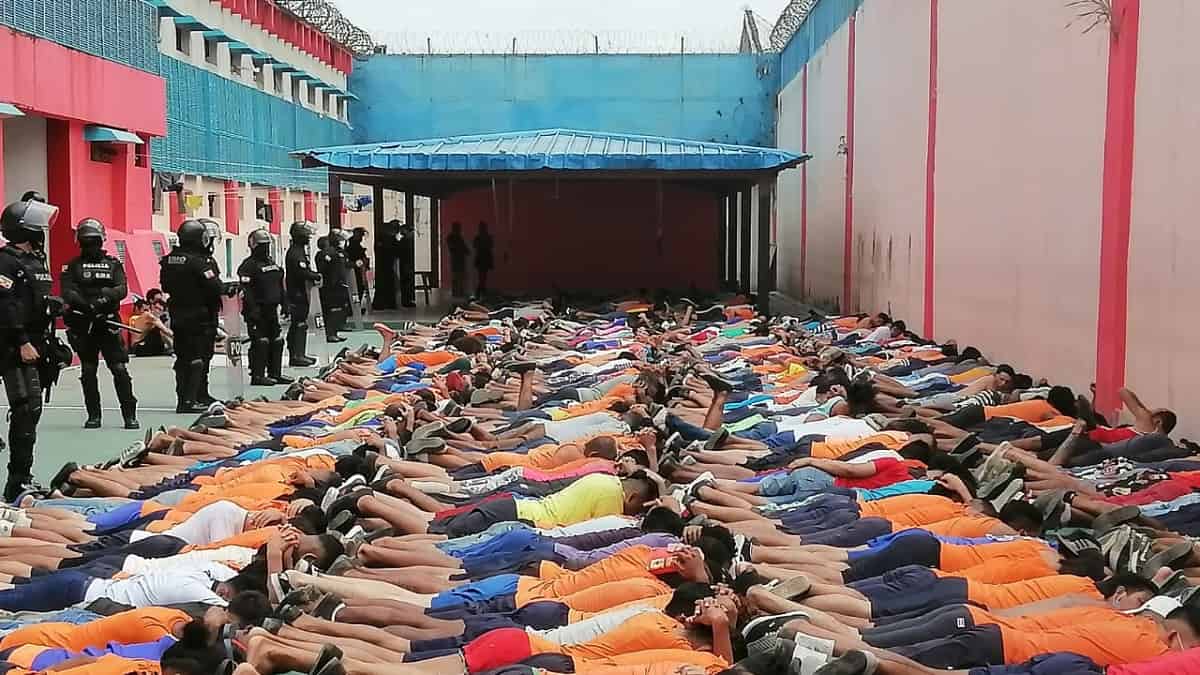 The Attorney General of Ecuador raised this Saturday to 68 the number of dead prisoners and 25 wounded in a new riot inside the main prison in the city of Guayaquil (southwest), where last September the worst prison massacre in the country was registered.

The Prosecutor’s Office added that “it activated missionary personnel from the Flagrancy Unit, which at the moment raises indications and evidence inside the prison.”

The agency indicated that it opened an investigation into “the violent acts and murders recorded last night and early today inside the Litoral Penitentiary, in Guayaquil.”

The agency indicated that it opened an investigation into “the violent acts and murders recorded last night and early today inside the Litoral Penitentiary, in Guayaquil.”

Pablo Arosemena, governor of the Guayas province, whose capital is Guayaquil, explained that the clashes began when a group of inmates sought to corner the detainees in pavilion 2.

That pavilion was left without its leader after the Justice released him after having served 60% of his sentence.

“As this pavilion was without a ringleader, other pavilions, with other gangs, tried to subdue them, enter to carry out a total massacre,” Arosemena said at a press conference, detailing that approximately 700 people are being held in pavilion 2.

The provincial governor assured that last night he traveled with other officials to the penitentiary and they found “very intense bullets crossing, and very close to the entrance door to the penitentiary, detonations, a situation of savagery.”

The police used tear gas to deter the situation, said Arosemena, emphasizing that the inmates who tried to enter pavilion 2 were not only firing “and making detonations, but were trying to make a hole in the wall” to enter.

“At the same time they burned mattresses, generating toxic smoke,” said the governor of Guayas.

According to Arosemena, the entrance of the National Police to the pavilion in the early morning “allowed to save lives.”

The country’s prison system has been under a state of exception since September 29 after the worst prison massacre in the country, which occurred precisely in this Guayaquil prison, where 118 prisoners were murdered, several of them dismembered, in the middle of a brawl between gangs related to drug trafficking, according to the authorities.

JUST IN 🚨 Dozens dead in prison riots in Ecuador pic.twitter.com/vqlcGeKG1p

A police source said that after the clashes the tactical units are intervening in the penitentiary.

Criminalistics experts and the National Directorate of Crimes Against Life carried out work in the sector where the confrontation took place.

The specialized agents were guarded by tactical commandos, who walked on the roofs to monitor the surroundings and anticipate any attack that could arrive from the courtyards.

The aforementioned media indicates that, in addition, during the inspection the agents found a rifle and a dozen blocks of dynamite. Ten prisoners were also taken to different health homes.

The images that circulate on social networks and live broadcasts from the prisoners themselves is what has allowed us to know that there are wounded, deceased and bodies that have been cremated inside the old Litoral Penitentiary, in Guayaquil.

The Ecuadorian prison system is under a state of exception declared on September 29 after the worst massacre that occurred in a prison in Guayaquil, where 118 inmates were murdered, several of them dismembered, in the middle of a brawl between gangs related to drug trafficking. according to the authorities presume.

Since then, the security forces have carried out periodic searches and control operations in prisons, the perimeter of which is controlled by uniformed officers.

The Constitutional Court ruled that the actions of the military in these precincts do not violate the Magna Carta as long as they remain outside the prisons and until the first filter of entry to the precincts.

Despite the state of exception, prisons have continued to be the scene of altercations in recent weeks, as several prisoners have been hanged, while during the festivities in honor of the deceased, at the beginning of the month, a fight between gangs left three inmates dead and a looted supply truck.

They point to inhumane practices

Last Wednesday, the National Service of Comprehensive Attention to Adults Deprived of Liberty and Adolescent Offenders of Ecuador (SNAI) requested the activation of the National Prevention Mechanism against Torture, following videos that reflect inhumane practices, allegedly carried out against prisoners in a Guayaquil jail.

The document made reference to videos and photographs “of general knowledge”, disseminated on social networks that “show alleged cases of torture among persons deprived of liberty at the Center for Zonal Deprivation of Liberty 8”.

In one of them, supposedly filmed by the inmates themselves in the Guayaquil Penitentiary, there is a young man who is submerged face down several times in a basin of water by several people who count several seconds until they take him out and tell him to ask a family the payment of a supposed debt contracted.

Previous Bezos shares his vision on the future of humanity: “Many people will be born in space”
Next South American migrants arrive by air in Tijuana