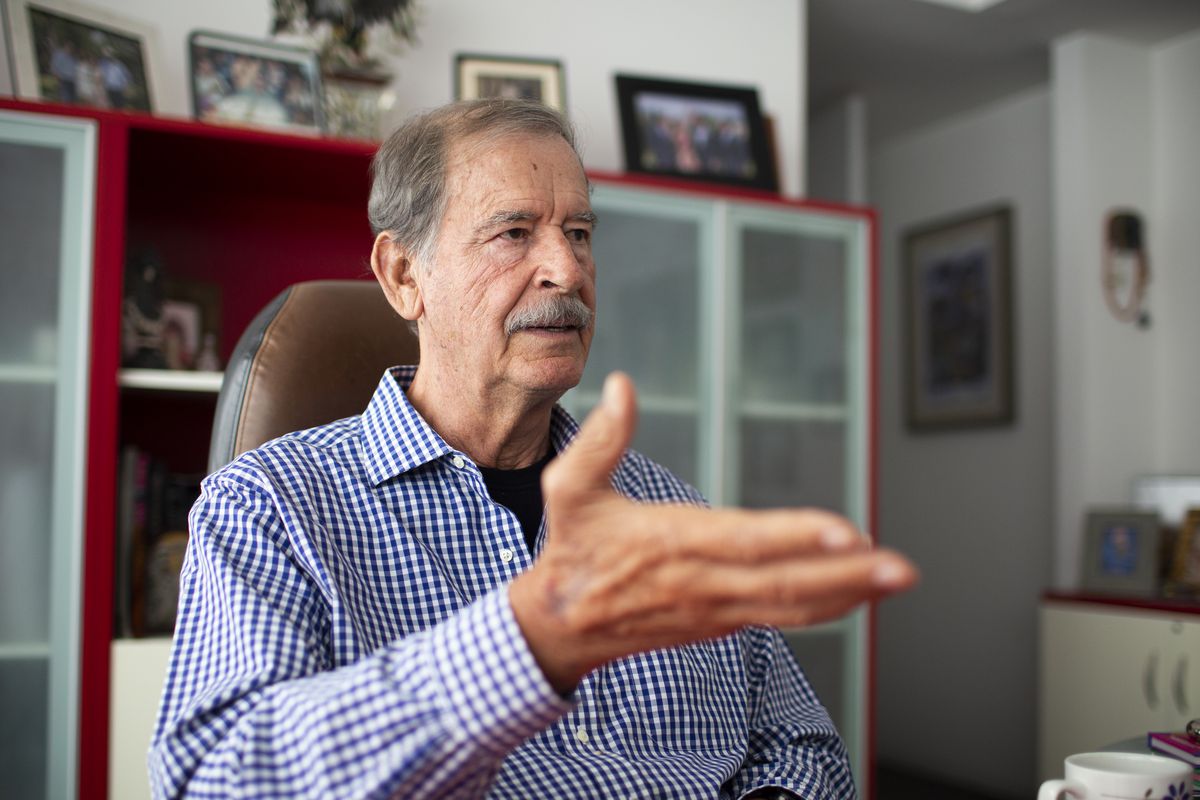 Some children run, others are in wheelchairs. In the background you can see bridges, dams and the Seguro Popular logo. In the foreground, dressed in a blue suit and a striped tie, the figure of the former president of Mexico, Vicente Fox. This is one of the many paintings that adorn the walls of the Fox Center in the municipality of San Francisco del Rincón, in the state From guanajuato. The venue, built in 2007, under the direction of the architect Francisco Serrano, has become the refuge of the legacy of the first PAN government (2000-2006) after more than 70 years of PRI governments in Mexico. The place houses a library-museum with all the iconic pieces of the former president, from the suit he wore at the presidential investiture ceremony to the patent leather boots he wore to the gala dinner with King Juan Carlos and King Sofia of Spain in 2001. .

Among the corridors of this hacienda, fairground and hotel, the most intimate affections of the former PAN president appear: the photographs of a young Vicente Fox at the foot of a tree, the wedding dress of his mother, Mercedes Quesada, the images that outline his love story with his wife Martha Sahagún and a handful of snapshots with their children. In this sacred land of foxism There is also a space to keep the memory of those distinguished guests who have set foot on the Fox ranch, from the former Spanish president José Luis Rodríguez Zapatero, to spiritual leaders such as the Dalai Lama or the singer Juan Gabriel. The fairgrounds, with auditoriums, library and museum, have not forgotten the president’s most beloved saddles and an exact replica of what was his presidential office in the Los Pinos residence.

In this family space, sheltered by his family, Fox (Mexico City, 79 years old) has returned to the microphones after the slowdown caused by the pandemic and even having suffered from covid-19, last August. On Tuesday he inaugurated the Leadership Without Borders forum, organized by the Fox Center in partnership with several California universities. The former PAN president, close to turning 80, spoke with the frankness that characterizes him about the challenges of migration and new leadership in front of a hundred young Mexican and American university students with Mexican roots. After his participation, he received EL PAÍS to take stock of the main problems facing Mexico.

Ask. What has been the biggest mistake that the Government of López Obrador has had to face the problem of migration?

P. What is the alternative that you propose to face the migratory phenomenon?

R. My proposal is very clear, first is Mexico and the Mexicans, that is the first thing to see in this matter. See for the Mexicans abroad, who are millions and millions, and see for the Mexicans who aspire to leave as migrants, attend to them so that we have them here in the country and third, a clear migration policy towards Central America and South Americans who enter through Guatemalan gate. A policy that is not discriminatory or violent, but that is humane and compassionate to give them the best possible treatment, but at the same time, find a way for them to stay in their own countries doing the corresponding task.

P. The option that you propose is very similar to the narrative of the president, who has already spoken of seeking to reactivate the local economy to stop the migratory exodus, mainly to the United States…

R. I don’t see it, what? Say he put in the ‘plant a tree’ program [Sembrando Vida] that’s a suck. To begin with, I would like to see the real figures for planting a tree here in Mexico, because I think it is an absolute deception, it is a mistake as they are doing it, there is no substantive and complete policy. But beyond that, my topic is more important, it would be to make an effort of comprehensive economic development with Central America, forming a council or a commission, as we did in that Puebla-Panama program, in a sensible way, in an intelligent way, if not convening to the Central American common market, which did exist and little is known about it, to make a successful association with the Mexican southeast of Puebla to the south, that would be a well-structured regional development policy.

P. You have been a staunch critic of this Administration’s security strategy. Why do you so harshly disapprove of this Government’s approach?

R. The same [López Obrador] He summed it up in his phrase “hugs, not bullets”, that is, absent yourself from the subject, avoid the subject and let the criminals do what they like in the country, this has consequences, one of them is for the migrants. The border has been criminalized more, as we see in Matamoros, but in addition, the issue of migrants and the issue of employment has been criminalized, because I estimate that today there are about 100,000 young people who are working for the cartels and that the cartels when They allow them free passage and to act freely in the territory, they have become a new Mexican State. The State of the Mexican cartels in comparison with the Mexican State no longer knows which is which. In the Government of López Obrador we have a failed State, totally failed in terms of security, zero results, but the situation is also aggravated by that permissiveness that has left the cartels.

P. How do you perceive the binational relationship between Mexico and the United States?

P. From a distance and in an exercise of self-criticism, what would you have done better as president of Mexico?

R. I would have done more or less the same thing I did in his time, create a true national policy, create and strengthen municipal police forces that do not exist today, because López Obrador has neither equipped them, nor does he give them resources, much less recognize them. his authority. It is terrible what has happened in the country, putting it in the hands of the Army, an Army that seems to be allied with the criminals and also gives them total permissiveness on the instructions of López.

P. Do you miss politics?

R. No, but I am forced to be in politics because the country is going to hell.

P. Will you participate in any way in the next presidential elections in 2024?

R. Behind the scenes and behind the scenes, I am certainly participating and working hard so that the political parties remain strong and united, so that the Citizen Movement and those four (opposition parties: PAN, PRI, PRD) join with a strategy and as a consequence with A coalition government is going to be the way to kick López out and put the country back on track.

P. Of the candidates being considered in Morena, is there one that you think is the best contender for the 2024 presidential elections?

Marta Sahagún: “The issue of the presidency is not a gender issue”

Although the former president of Mexico is surrounded by hundreds of young university students who have attended this week’s forum on leadership and migration, by his side is his same old companion: Marta Sahagún from Fox. Sahagún speaks avidly about the plans and projects of the different civil associations that coordinate from the ranch. She eloquently addresses everything from binational leadership issues to the orchestra program for children and youth in 16 communities. And although she does not go into detail about the budgets, the former first lady herself says that all these initiatives come from donors, sponsors and her own resources, without government support. “Our focus is very clear, opening possibilities to children who do not have resources. Our focus is the poor,” she insists.

Despite the energy that overflows when talking about the initiatives of Vamos México and Centro Fox, she affirms that she has no intention of returning to that public life that subjected her to intense public scrutiny and the occasional legal battle. “Everything is stages in life and you have to be very clear about it. Vicente had a great presidency, but we were both very clear, that it was six years and as soon as you arrive you leave, the matter is over and the best of you has to come in, because the doors open, but at six years old we took our little things and we arrived at this ranch, I arrived happy to live here, ”she says in her office full of photos of her loved ones: her parents, her children and the dinners and galas she shared during her husband’s term.

Questioned about whether Mexico is ready to have a female president, Sahagún bluntly concludes that the presidency is not a gender issue. “The presidency is a matter of desire, will, talent, preparation, passion and compassion, because you have to work hard, because everyone deserves a better quality of life and that when done with conviction, without any other interest, both a man and a woman have as much capacity”, he concludes.