The talented baseball player Miguel Vargas starred this Wednesday in an important chapter in the history of Cubans in MLB when he became the 32nd player born on the island to perform in the same season of the Big Show.

It may interest you: SHOW by Vargas in debut, Cuban RECORD in MLB, HEROIC HOMER by Abreu. Summary

Vargas carried the offensive weight of the Los Angeles Dodgers in a confrontation that ended in a 3×0 victory over the San Francisco Giants. He went 2-for-4 with a double (1), two RBIs (2) and a stolen base (1) (.500).

After the match ended, the Havana native spoke with the MLB Network reporter, Jon Morosi, with whom he shared the emotions of this first time accompanied from the stands by his family.

«It was a great moment for me and for my family, obviously. I just want to share this moment with them. For me, I was running to the fence and giving everyone a hug, it was very exciting. Very good that my family could come, “Miggy confessed at first.

“We left Cuba in 2015, my family left everything so that my dream could come true and it is happening,” he said regarding the sacrifices made based on his development in professional baseball.

From Miguel Antonio’s first at-bat, the whole family could be seen celebrating from the stands, particularly his father, Lázaro Vargas, a former Cuban baseball star.

“My father and I talked a lot about this moment. We shared a few minutes before the game and he has supported me my entire career. It is very important to me that you are here.”

Regarding his particular relationship with the Gurriel and his predilection for the Yuli, Morosi asked him if he had had contact with them, to which Vargas replied, “Yuli wrote to me the night before debut congratulating me on getting to this point. I haven’t called them yet, but we need to talk.”

“I just want to share this moment with them. For me, I was running to the fence and giving a hug to everybody, it was so exciting.”
@miggy___13 had his family in the stands for his MLB debut, and he spoke with @jonmorosi after about how much it meant.
@Dodgers | #MLBNShowcase https://t.co/LKAFbXi7az 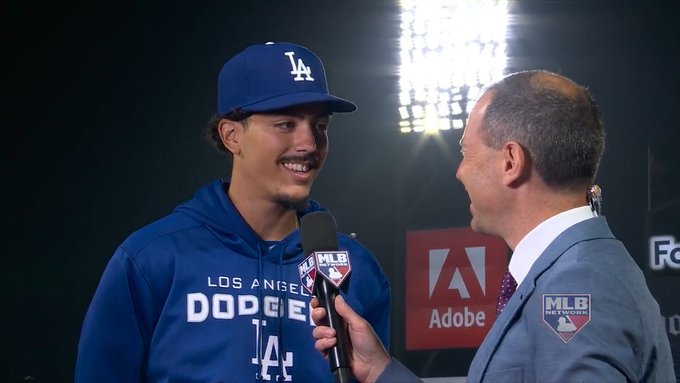