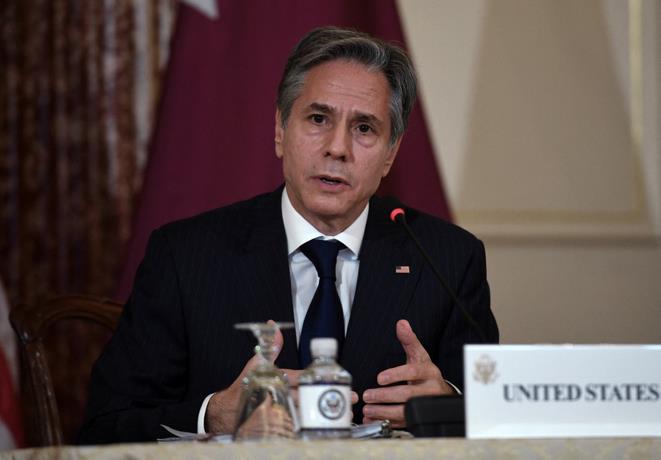 The United States warned China on Saturday about the pressure it is exerting on Taiwan, the State Department reported Saturday, as the two powers prepare to hold a top-level summit.

US Secretary of State Antony Blinken spoke with Chinese Foreign Minister Wang Yi and “expressed his concern about the continuing military, diplomatic and economic pressure from the People’s Republic of China against Taiwan,” the State Department wrote. it’s a statement.

US President Joe Biden and his Chinese counterpart Xi Jinping are scheduled to hold a remote summit on Monday Washington time.

Blinken and Wang spoke on Friday to discuss preparations for the summit, with the secretary reported as “urging Beijing to engage in meaningful dialogue to resolve the issues … in a peaceful manner consistent with the wishes and interests of the government. people of Taiwan “.

In turn, Wang warned of the dangers of US actions that could be seen as supporting “Taiwan independence.”

“Any collusion and support for the ‘Taiwan independence’ forces undermines peace in the Taiwan Strait and will ultimately backfire,” Wang told Blinken, according to the Chinese government.

Relations between the world’s two largest economies have deteriorated, in part because of Taiwan, an autonomous democracy claimed by Beijing.

Washington has repeatedly voiced its support for Taiwan in the face of what it has described as Chinese aggression.

The State Department said Monday’s summit “represents an opportunity for the two leaders to discuss how to responsibly handle competition between the United States and the People’s Republic of China, while working together in areas where interests align.”

The presidents of both countries have spoken by phone twice since Biden arrived at the White House in January.

The US president had intended to meet his Chinese counterpart at the recent G20 summit in Rome, but Xi has not traveled since the start of the covid-19 pandemic.

“I have observed repeatedly, in the last ten months, that the relationship with China is one of the most important and also the most complex that we have,” Blinken said on Friday.

“It has different elements: some cooperative, others competitive and others adverse, and we are going to manage all three at the same time,” he explained.

Biden has largely held the same stance as his predecessor, Republican Donald Trump, on Beijing. Both administrations see a rising China as the main challenge of the 21st century for the United States.

On Thursday, Xi warned against a return to Cold War-era divisions during a speech at a business conference parallel to the Asia-Pacific Economic Cooperation (APEC) forum summit.

“Attempts to draw ideological lines or form small circles for geopolitical reasons are destined to fail,” the Chinese president said.