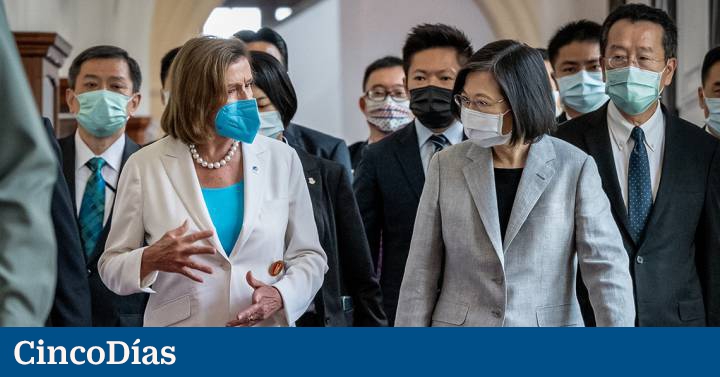 The US has given China a hard time in its battle for world economic leadership. And it has done so in the field of chips, a strategic area for the economy of the future, increasingly digital and dependent on these small components. The US Congress has just approved the Chips and Science Act, with a historic federal program of 52,000 million dollars (more than 51,200 million euros) to boost national chip manufacturing capabilities, an amount that, however, some judge short compared to the Chinese program of 150,000 million dollars.

The American program, however, includes other tools to balance the financial imbalance, the most powerful being a poison pill for the Asian giant: it prohibits chipmakers that obtain federal funds from the United States from opening new advanced chip plants or expanding their production. Already existing in China for 10 years. A restriction that affects, among others, the Taiwanese giant, TSMC, the South Korean Samsung and SK Hynix, and the American Intel, but also the European ASML.

The move, which will see them miss out on growth opportunities in the world’s largest chip market, also extends to Russia. And it has one exception: it does not affect the production of 28-nanometer chips or earlier, less advanced generations. The most sophisticated products of the Chinese chipmaker SMIC are at that threshold, and it will hardly exceed it if ASML continues not to sell its extreme ultraviolet lithography systems to it, continuing the boycott that began under pressure from the administration of former US President Donald Trump.

Recipients who violate restrictions on production or sale to China may be forced to pay federal subsidies received in full, according to Bloomberg, who says the White House will soon sign the law after approval by the Senate and Congress.

A large part of the US federal subsidy is expected to go to Intel, TSMC and Samsung, all of which are building tens of billions worth of new chip manufacturing facilities in the US. However, according to Reuters, the Department of Commerce has announced that there will be restrictions on the size of subsidies and other commitments on their purpose to ensure their effectiveness.

Among the potential large recipients of the subsidies, only TSMC is making relatively advanced chips in China at the moment; at its plants in Nanjing it manufactures 28- and 16-nanometer chips. Intel, for its part, has chip packaging and testing facilities in China, and has already signaled fears that the restrictions “could inadvertently undermine the global competitiveness of companies that receive chip funding.”

The visit these days by the Speaker of the US House of Representatives, Nancy Pelosi, to Taiwan has only added fuel to the fire. The American politician held a meeting this Wednesday with TSMC executives, with whom she discussed the new Chip Law and asked for collaboration in key technological areas, according to Nikkei Asia.

At a press conference the same day, Pelosi hailed the passage of the Chip Act as “a great opportunity for economic cooperation between the US and Taiwan.” The US has also repeatedly raised concerns about the security of chip supplies and the possibility that geopolitical conflicts in Asia will disrupt the global supply chain for semiconductors.

The US, which is rushing to build a national semiconductor industry in its battle with Beijing for technological supremacy, sees TSMC as vital to its interests in this field, as the Taiwanese company, which is the world’s largest contract chipmaker , supplies this component to American giants such as Apple, Google, Qualcomm and Nvidia.

Many US politicians have expressed concern that China could take over TSMC, should it invade Taiwan, giving it control of the world’s most advanced semiconductors. But, as the president of this company, Mark Liu, has explained, “no one can control TSMC by force. If you take it by military force or invasion you will make their factories inoperable.”

Washington has even singled out reliance on Taiwan specifically as a risk, according to Nikkei Asia. To break that dependency, it has recently struck a deal with Japan to work together on developing 2-nanometer chips, Reuters reports, and is working toward a closer alliance with South Korea.

Precisely, Pelosi is also expected to meet with executives from Samsung and SK Hynix in South Korea, the next country on her visit to Asia. At the close of this edition, the meeting had not yet taken place. According to Kim Young-woo, head of research at SK Securities in Seoul, “protective barriers against China will accelerate Korean chipmakers’ shift to the US from China.”

Investments. Not only the US and China are offering significant sums of money to attract chip manufacturing to their territories. So are South Korea, Japan, Taiwan, Singapore and the EU, which in February announced the European Chip Law, which will mobilize more than 43,000 million euros of investment from both the public and private sectors with the aim that by 2030 20% of the world’s chips are produced in the EU (now it is 10%). But the latest moves seem to leave Europe in a more disadvantaged position.

Chip4. And not only because of the economic allocation aimed at attracting chip manufacturers, which is less than that offered by China or the US, but also because the US Chip Law has already been approved and the European one is not expected to be until the second quarter of 2023. Also, because according to different sources, the US has proposed to Japan, Korea and Taiwan to create the Chip4 alliance to build a semiconductor supply chain, leaving the EU out of the initiative.

Competition. In July, Will Hunt, a semiconductor policy analyst at the Center for Security and Emerging Technology in Georgetown, told The Wall Street Journal that the US was expected to coordinate with other chip-making countries to avoid subsidy competition. that may lead to excess production or overlapping government investment.

Rival for ASLM. South Korea also seems to be willing to invest to strengthen its ecosystem around the chip business and one of its objectives would be to promote a company capable of creating advanced machines to manufacture state-of-the-art chips, which would compete with the European ASML.