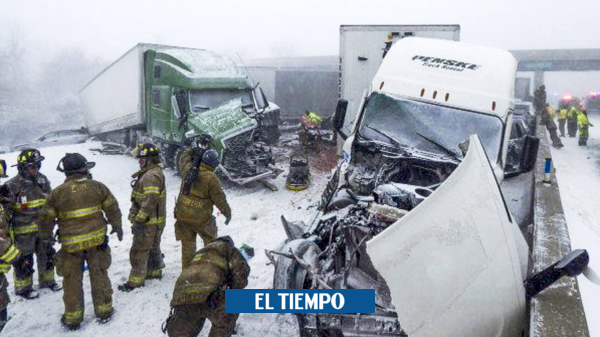 A strong winter storm accompanied by icy temperatures disrupted the Christmas weekend to United Statess, where it caused the death of at least 31 people and the cancellation of thousands of flights.

(Read here: This Latin American country has not celebrated Christmas for more than 100 years)

The United States National Weather Service (NWS) warned that the cold was life-threatening and urged residents to stay indoors.

(Also: ‘The angel of death’: the smog that devastated a town)

On Friday icy winds had brought the temperature down to -48ºC. In hard-hit northeast New York state, Gov. Kathy Hochul has deployed the National Guard to Erie County and Buffalo, where authorities said emergency services are all but paralyzed.

The situation is particularly impressive in Buffalo, on the border with Canada. A couple from this city said that, with the roads impassable, they will not make the 10-minute drive necessary to visit their family for Christmas.

“Currently we can see across the street, but last night we couldn’t even see beyond our porch,” said Rebecca Bortolin, 40. Her fiancé, Ali Lawson, suffers from back pain, but she doesn’t want to risk the drive to the hospital.

There, the NWS warned that the blizzard would continue through Christmas Day and announced a “slow moderation of temperatures” only on Monday. On Saturday, more than 3,300 flights were canceled and more than 7,500 delayed. The day before, almost 6,000 flights had been cancelled, according to the FlightAware.com site.

US Transportation Secretary Pete Buttigieg said Saturday that the US aviation authority, the FAA, “expects the most extreme disruptions to be behind us as airline and airport operations gradually recover.” Many travelers stranded at airports in Atlanta, Chicago, Denver, Detroit and New York they clung to their words, hoping that a Christmas miracle would finally lead them to their destination.

Zack Cuyler, 35, had to spend Christmas Eve with friends in New York after two cancellations of his flight to Houston, where he was going to celebrate the holidays with his family. But he told AFP that he did not lose hope of being able to meet his loved ones this Sunday.

In all, authorities have confirmed at least 31 deaths, in eight
states, due to inclement weather. Some of those deaths have occurred on the roads, which have become very dangerous, such as in Ohio, where four people were killed in storm-related crashes, Gov. Mike DeWine said.

Cities like Denver or Chicago have opened shelters to accommodate the homeless and protect them from the risk of hypothermia. Due to the freezing temperatures, the pressure on the power grid was extremely high: up to 1.7 million people were without power, according to Poweroutage.us.

Electric power was largely restored Saturday night, but in some places there were calls to reduce consumption and there were service outages. As of 1130 GMT on Sunday, around 173,000 users were still without power due to the effects of extreme cold, according to Poweroutage.us.

The hardest-hit states at that time were Maine, New York, Virginia, New Hampshire and Pennsylvania. Some cities, especially in North Carolina, had to temporarily shut off power due to high demand for electricity, leaving homes without heat. –

VIDEO: Heavy snow sweeps through the city of Buffalo in the State of New York, as a fearsome winter storm continues to pummel parts of the United States with blizzard conditions. pic.twitter.com/5HbaTq9bat

‘Prepare for extreme cold’ in the United States

Since Friday afternoon, the storm has become a “low-pressure bomb”: a collision between two air masses, one very cold from the Arctic and the other tropical from the Gulf of Mexico.

According to meteorologists, freezing cold will continue across the central and eastern United States through the weekend before temperatures return to more normal levels next week. Until then, “if you must travel or be outdoors, prepare for extreme cold by wearing several layers of clothing and covering as much skin as possible,” the NWS noted. “In some places, being outside could cause frostbite in a matter of minutes,” she warned.

Canada was also affected by the storm and all provinces had weather alerts. Hundreds of thousands of people lost power in Ontario and Quebec, and airports in Vancouver, Toronto and Montreal saw flight cancellations.