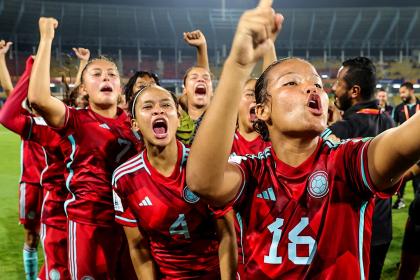 Colombia never tires of making history After qualifying for their first quarterfinals, they left Tanzania and faced a tough rival in the semifinals, whom in fact, they have not yet managed to beat in the history of the U-17 World Cup . Well, although they were overcome, it was all in the penalty shootout after a goalless draw in the 90 minutes.

Luisa Agudelo was definitive saving the last penalty in the shootout. The launch and the cover that put Colombia in its first final in the entire history of a World Cup in all categories and in all branches (male and female). Already installed in the defining instance of the championship, the coffee makers will face Spain again in that instance.

An extremely historic contest for Colombia in the U-17 World Cup. Against all odds, a country without a constant league had players under 17 qualify for the final, overcoming all the problems that women’s football has in the Colombian nation. Colombia surpassed what was done by the Sub-20 twelve years ago, which reached that same semifinal instance, precisely against Nigeria.

At that time, the Colombia Sub-20 National Team, in its first participation in the World Cup, managed to finish fourth in the world. His similar U-17 had that same possibility, but they changed history in the most important game of their lives, beating the Africans and getting into the final.

Linda Caicedo awaits her rival in the final, Spain, who beat Germany by the slightest difference in the final. To get the thorn out.

When is the final played?