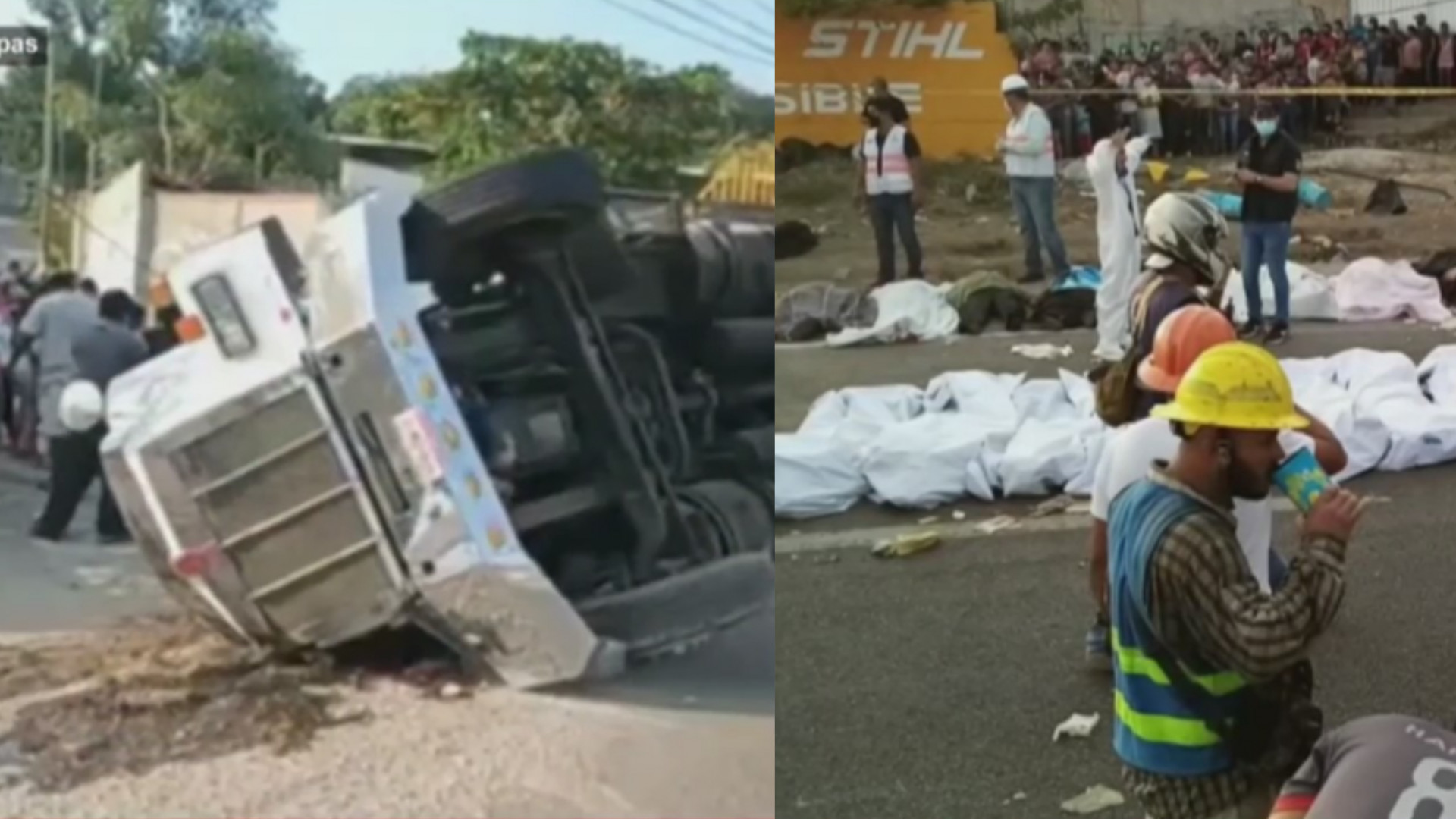 A trailer in which dozens of immigrants were traveling had a spectacular accident on a highway in the southern Mexican state of Chiapas, which left at least 54 dead, dozens injured, 3 of them seriously, according to the Attorney General’s Office on Thursday night. Mexico.

In a report released at 10:00 pm local time, Chiapas Civil Protection updated the balance of victims, specifying that 49 people perished at the scene and another 5 died during hospital care due to the severity of their injuries.

In addition, 105 people are injured in various hospitals in the Metropolitan region; 83 men and 22 women.

Hours earlier, the Secretary of Civil Protection of Chiapas, Luis Manuel García, reported the death of 49 people and 58 wounded.

The vehicle overturned this Thursday afternoon in Tuxtla Gutiérrez, the capital of Chiapas, while circulated on the Pan-American highway coming from Comitán, a border municipality with Guatemala. It is a common route for the illegal smuggling of migrants who are crammed into the boxes of trucks and thus cross a large part of Mexico.

The accident occurred around 15:30 (local time). The trailer hit a retaining wall while coming off a curve and then against a pedestrian bridge. As a result of the impact, the box in which around 107 people were traveling fell off and the migrants threw themselves against the asphalt.

According to images released by the state’s Civil Protection, several bodies were scattered on the asphalt while others were left inside the trailer box. Neighbors of the place were the first to provide aid to the survivors.

Rollover with migrants was due to speeding, according to witnesses

“The testimonies indicated that the truck was speeding and when it took a sharp curve, the box where the migrants were traveling fell off and fell off, “said Luis Manuel García Moreno, Chiapas Secretary of Civil Protection.

Aid bodies from the Mexican Red Cross, Civil Protection, Firefighters and other rescue groups have arrived to attend to dozens of injured. The people who were injured are treated on the spot and, where appropriate, transferred to hospitals in various parts of the region.

Authorities of Mexico and Guatemala react

“My solidarity with the victims of the traffic accident that occurred in the Chiapa de Corzo-Tuxtla Gtz section. I have instructed to give prompt attention and assistance to the injured. Responsibilities will be determined according to the law,” he said in a message on Twitter the Governor of Chiapas, Rutilio Escandón.

Also the Mexican chancellor, Marcelo Ebrard, He expressed himself through his Twitter account about the accident and said that the deceased people are of different nationalities, so he will contact the different foreign ministries.

“Serious accident in Chiapas with victims of nationals of other countries. My condolences to the victims and affected families. In communication with the State Government and Civil Protection. We make contact with the foreign ministries of the affected countries,” he wrote.

For its part, the Guatemalan government said that it maintains “communication” with the Mexican authorities in case consular “support” is necessary.

As a symbol of this growing crisis, several migrant caravans have left southern Mexico in recent months, most of them being dismantled by the country’s authorities, who received convictions by the UN for the treatment of foreigners.

The Mexican Government has harvested criticism for his treatment of migrants and for the current deployment of tens of thousands of elements of the Armed Forces on the northern and southern borders for migration control tasks as part of the cooperation in this matter with the United States.

In many cases, human traffickers transport foreigners in crowded conditions and poor security through the southeastern, central and northern states of the country on their journey to the United States.

Mexican authorities intercepted 228,115 migrants and deported 82,627 from January to October 2021, numbers not seen in more than 15 years.

In addition, 123,000 migrants have requested refuge in the first 11 months of 2021, another absolute record since in previous years there were some 40,000 requests.

Government said everyone should travel in economy class

President Luis Abinader said that the expectations are to consolidate the growth of tourism and ... Read more