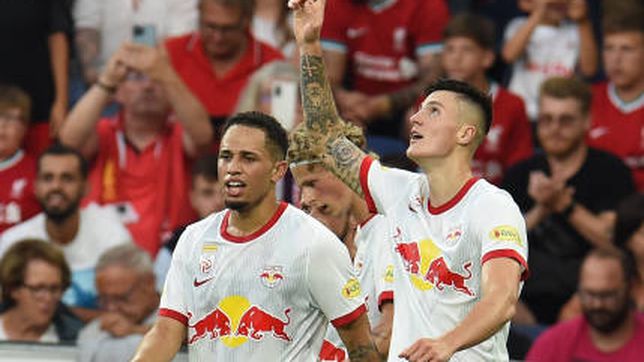 Since Todd Boehley took over as Chelsea’s new owner, the London team has set itself the goal of having an important transfer market and until now has managed to make signings like Kalidou Koulibaly and Raheem Sterling Y still maintains the desire to sign a striker able to cover the departure of Romelu Lukaku and thus be able to compete for the Premier League this season.

Despite names like Cristiano Ronaldo and Neymar sounded like possible signings for Chelsea, neither of the two managed to materialize, so the team led by Thomas Tuchel is still looking for a new scorer.

According to reports from Roman Fabrizio, Chelsea had meetings with the environment of the Slovenian attacker Benjamin Sesko, who has become the desire of several important clubs in Europe, including Manchester United, who would have taken the initiative for his signing.

In addition to Manchester United and now Chelsea, the RB Salzburg striker, known as the ‘new Haaland’, is wanted by another club in Europe, whose identity has not been revealed. And wishing to sign Sesko, Todd Boehly and the Blues would be willing to rob their Premier League rival and the other club of the 19-year-old attacker’s signing.

Nevertheless, It will be up to the Salzburg striker to decide which club he will play for during the 2022-23 season, as the Austrian club hopes to keep him for one more season, but if a suitable offer lands on their desks, they will consider selling. That being the key for Chelsea and Manchester United.

One factor that could benefit Chelsea is that, as previously revealed by AS, Todd Boehley would have set a starting price for both César Azpilicueta and Marcos Alonso, who are wanted by Barcelona, ​​which would give enough income to the English team to attack United and steal the signing of the 1.94-meter-tall striker, who due to his characteristics shown in preseason is already considered the successor of Eerling Haaland for the next few years .

Excl: Chelsea had meeting with the agent of Benjamin Šeško last week. Manchester United had more than one direct meeting – and there’s also another club in the race. ⚠️🇸🇰 #Sesko

The decision is up to the player in the next days, as RB Salzburg hope to keep him for one more year. pic.twitter.com/2Bwq2Sd9mm