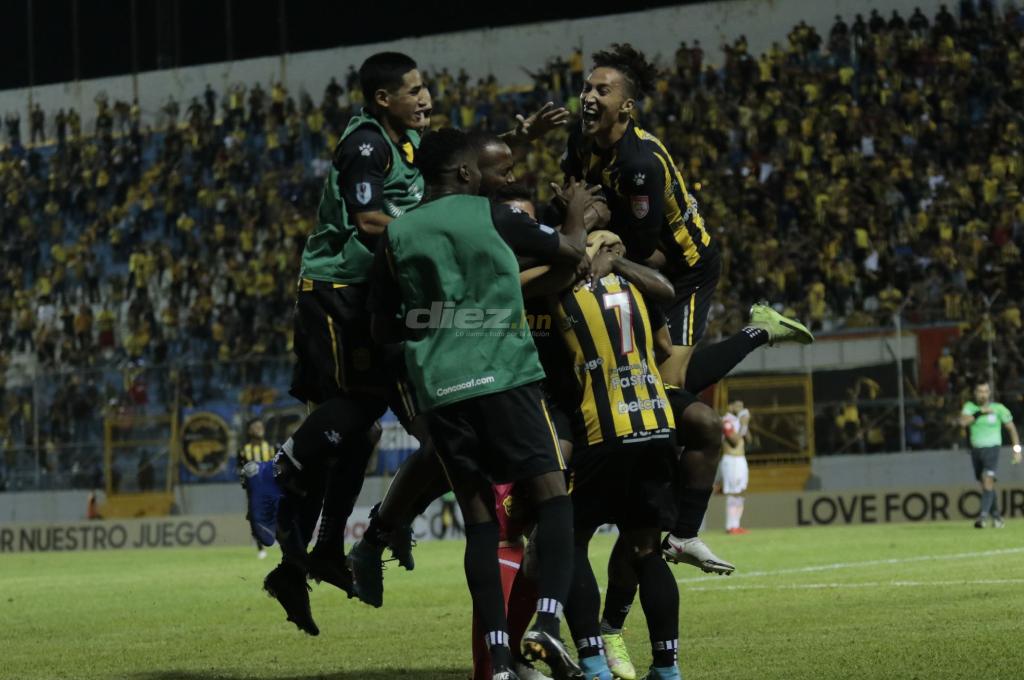 THREE MINUTES OF DISCOUNT ARE ADDED IN THE MORAZÁN!

Estelí’s defense complicated itself and left the ball to left-handed Alejandro Reyes, who without moving, subtly touched the ball and sent it to save after a beautiful jump. The goal of tranquility arrived and the Machine will play the Concacaf League.

85′: Alejandro Reyes’s shot that brushes the right post of Salandía.

82′: Salandía saves again in two stages before the stalking of Pedro Baez. If it weren’t for the goalkeeper raised in Danlí, the Nicaraguan team would fall for more goals.

78′: SALANDÍA STOPS! Paraguayan Baez finishes off with a header and Estelí’s goalkeeper reacted with a slap. He will have a corner.

It seemed that he was never going to fall and he was close to passing. After Salandía became gigantic before a shot by Benavídez, the ball was left to Ramiro Rocca who, before a protected goal, shot into the back net and the ball went in for his brace. The Argentine went to celebrate with the camera!

63′: HEADING BY GETSEL MONTES AND SALANDÍA BAGS AFTER A CORNER KICK!

61′: Yellow card for the Real Estelí goalkeeper for wasting time. It is the first warning of the match.

58′: FLY SALANDIA! Far left-footed shot by Darixon Vuelto that the Hondu-Nicaraguan goalkeeper saves with his palm.

55′: It is too early for Real Spain to dedicate itself to throwing centers, which end up being rejected by the pinolera defense. No genius in the aurinegra squad, which is already beginning to despair.

52′: INCREDIBLE! BAEZ, HEADING, FITS OFF THE CROSSBOARD IN HIS ATTEMPT TO ASSIST! Later, Lacayo finishes off bitten and Salandía catches and throws himself to freeze the match.

fifty’: No emotions so far in the second half. Real Spain dominates, but does not create danger.

START THE COMPLEMENT IN THE MORAZÁN! The Machine must win or else it will be eliminated from the Concacaf League on the away goal.

END THE FIRST TIME! Real España, having Real Estelí cornered, is drawing 1-1 and thus finds itself eliminated from the Concacaf League due to the away goal. Rocca (7′) and Monserrat (23′) scored from a penalty.

45+2′: Incredible return. He broke into a long possession with a resounding long-range shot that left the stadium.

THREE MINUTES OF DISCOUNT ARE ADDED IN THE FIRST HALF IN THE MORAZÁN!

40′: ROCCA FAILED IT! IT WAS 2-1! The Argentine had the brace served before the assistance of Baez, but his forehand shot, the least skilful, hit goalkeeper Salandía in the face.

38′: Another opportunity lost by Real Spain. Baez lengthened the ball in the area, but center back Getsel Montes went blank in his shot attempt.

35′: BAEZ HAD IT! Darixon’s dangerous center returned to ground level and Baez could not hit it well, crashing it in front of the goalkeeper. The goalkeeper Salandía kept the ball in two halves.

33′: CHANGE IN REAL SPAIN: Paraguayan striker Pedro Baez enters for containment Gerson Chávez. With this, they go on to play a line of three in defense by moving Devron García from central to midfield.

The aurinegro goalkeeper has just saved the Machine’s skin. First, right mitten before a one-on-one against the striker Monserrat. Later, in the counterattack, the striker from Pinoleros shot at his body and the ball went to the corner.

30′: We arrived at the first half hour of the game and Real Estelí is the one that shows itself better on the pitch from San Pedro de San Pedro. There have been no shots on goal throughout the game, as both goals came after penalty kicks.

23′: GOOOOOOOOOOOOOOOOOL FOR REAL ESTELI!! Fabián Monserrat tricks Buba López and with a shot to the right, the pinoleros tie the score and thanks to the visiting goal they are eliminating the catrachos.

21′: PENALTY FOR REAL ESTELI! Gerson Chavez he leaves his hand very extended and the ball hits his arm inside the area. A totally legal charge that leaves no room for claims.

twenty’: It should be remembered that the visiting goal is worth in this contest. If there is a tie with goals, the Nicaraguans will advance. There will be no extra time.

fifteen’: Little or nothing has been played in the Morazán stadium. Very disputed physically, because many fouls have occurred, but no dangerous plays have been created.

10′: HARD HIT! Strong head contact from winger Cristiam Gutiérrez with Darixon Vuelto. The Nicaraguan had to be bandaged due to bleeding.

The Argentine striker hit a left-footed shot to the left net of Salandía’s goal, who threw himself to the opposite side, being deceived by the ‘killer’ of the Machine.

7′: GOOOOOOOOOOOOOOOL OF REAL ESPAÑA! ROCCA TRANSFORMS THE PENALTY INTO A GOAL!

Ramiro Rocca throws himself before the exit of the goalkeeper Salandía and the midfielder Chapín Mario Escobar buys the maximum penalty. The aurinegro striker barely had contact with the pinolero goalkeeper. He was a great pool, but since there is no VAR…

3′: Real Estelí starts off well. Striker Henry García dares from the outside, but shoots wide.

6:06 PM: THE GAME STARTS! Aurinegros and blanquirrojos play the pass to the second round of the Concacaf League.

5:55 PM: THE TEAMS COME OUT TO THE FIELD FOR THE START OF THE MATCH!

5:20PM: THE SQUADS ARE ALREADY WARMING UP IN THE MORAZÁN!