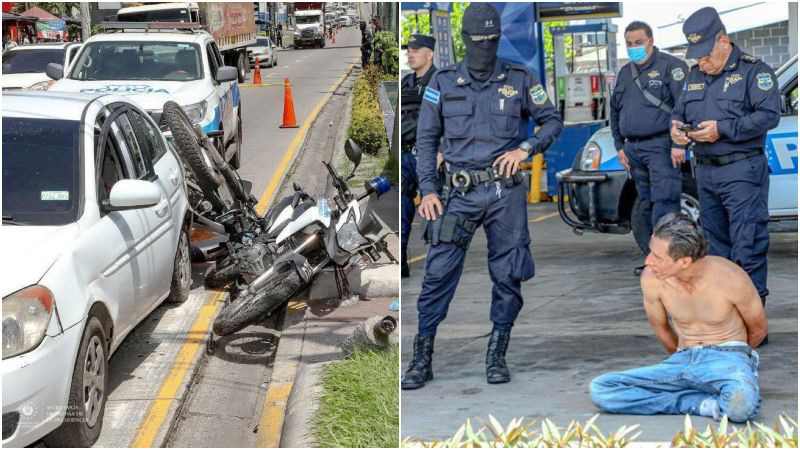 A food vendor died after one of the criminals fired at the policemen in his attempt to escape.

At 11:45 a.m. this Wednesday, a call was received to the 911 Emergency System and it was reported that a man and a woman, alleged gang members, evaded a traffic control installed on kilometer 10 of the Troncal del Norte highway, in Ciudad Delgado.

The car in which they were driving passed the control and injured an inspector of his left arm. He also damaged police equipment, according to the authorities’ report.

A motorized patrol gave chase until you reach the Apopa shopping center. In their attempt to escape, they fired at the officers.

Read also: Gang members kill a woman and injure a Police inspector during a chase

One of the bullets hit a food vendor who was in the area. She was taken to a hospital where she later died.

They continued walking and they stopped so that the police motorcycle hit them from behind and, apparently, gave them time to flee.

“After a manhunt, we captured these terrorists in Apopa who were trying to escape justice, It is about Salvador Enrique Martínez and Hessel Daniela Cruz“, said the Minister of Justice and Security, Gustavo Villatoro.

“When intercepted, one of the criminals started shooting and, unfortunately, he murdered a citizen,” the official added.

He warned that “this fact will not go unpunished, We are going to make sure that these individuals are brought to justice for their crimes.”

It may interest you: Salvadoran gang member fled and was captured in Guatemala

In another case, two alleged gang members were gunned down on Wednesday morning in the area known as El Casco, in the Escalón canton, in San José Villanueva, La Libertad.

According to the police report, the incident was classified like a confrontation between police and gang members. No police officer was injured, detailed the PNC.

Similarly, they mentioned that other five men participated in the illegitimate aggression and after the attack they escaped among the coffee plantations.