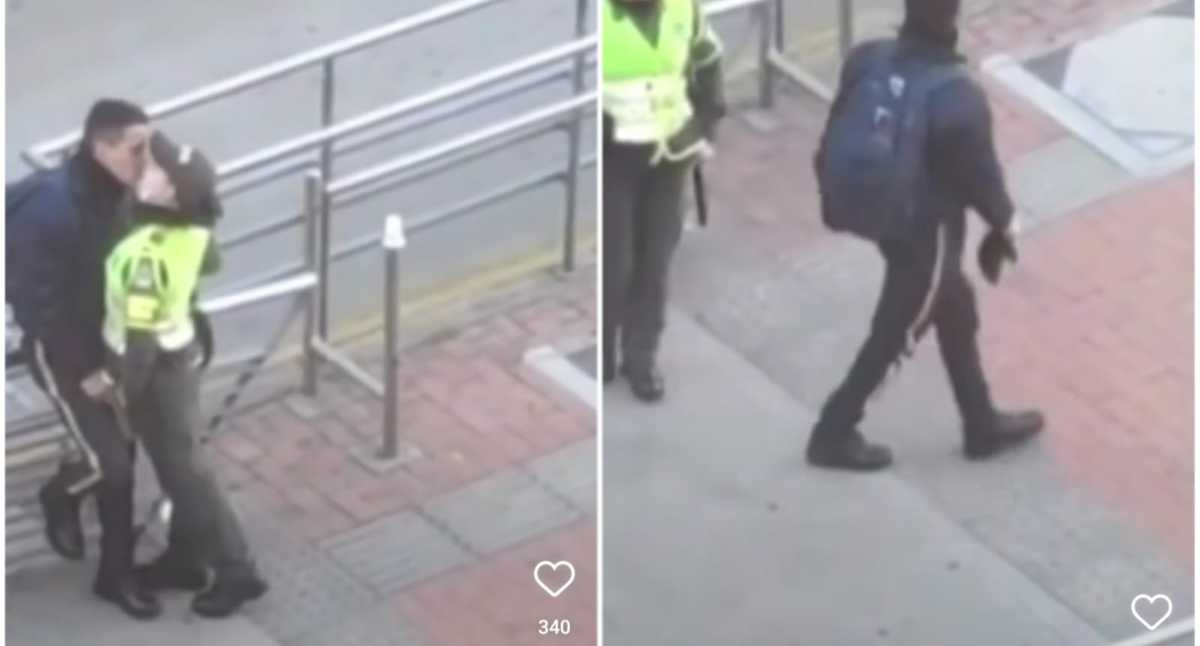 They remember a video of a police officer and a guard kissing at the TransMilenio station; divide opinions online

With the advancement of technology, many events that previously went unnoticed are now quickly known and are even at risk of going viral and being seen by millions of people, not only in the country where it occurs, but also in neighboring nations.

In this sense, an Internet user recalled a video from 2021 (according to official sources), from the moment in which a Police patrol car and a security service guard of Bogota’s transportation system, TransMilenio, kiss passionately.

The event was captured by someone who was obviously on a high floor, in one of the buildings that are in front of the station, which, apparently, is located in the south of the city, because whoever records zooms in and when opening the panorama reveals that he is from above.

The video was initially published on the Kwai social network and shared on Instagram, in a gossip account, where it accumulated dozens of comments.Well, for some people the fact caught their attention, while for others it is an ordinary couple who publicly shows affection and that “there is nothing wrong with it.”

“The neighborhood gossipers recording what they shouldn’t and when things of real importance happen there if they aren’t there”; “What’s wrong? how ridiculous, they have feelings like anyone else!”; “People do suffer, long live love, we all have the right to express what we feel as human beings,” were some of the comments the video received on Instagram.

On video: model got on TransMilenio to parade and took off her shirt, who is it?

A video circulated in networks in which it is observed a young man who walks down the aisle of one of the buses of the transportation system, in the best style of a professional modeler; The fact caught the attention of the passengers who were there at the time, so much so that some passengers decided to record it.

You don’t usually see people parading on public transport buses, let alone shirtless. The protagonist of what happened is the actor, influencer and model, Alejandro Quintero, remembered for his interpretation in the film Keep out of reach of childrenfrom 2017, which was directed by Gustavo Sánchez.

The actor, who is Venezuelan, has repeatedly denounced having been a victim of xenophobia in the country, as well as dozens of critics, for which he has chosen to express through his social networks: “If it bothers you so much that I dance in public, Just unfollow me or don’t see my content, don’t suffer for what others have.

Likewise, the influencer, who already has more than 1 million followers on Tiktok, and more than 100,000 on Instagram, is recognized on these platforms for his dance content indoors and outside the home, as he shared at a TransMilenio station. .

In September, a video was released of a couple in a TransMilenio article having a heated argument while travelers were careful that the tone of the fight did not escalate.

Although you can’t hear what they are saying very well, at first they are seen shouting and she claims him for an alleged robbery. The discussion continues and in several videos they are seen fighting, although what they say cannot be heard, while the travelers are uncomfortable with the situation.

However, the situation becomes even more tense when the young man is left outside the bus and hanging from the door, putting his life at risk.

Previous ‘Everything Everywhere’ Made Michelle Yeoh the Actress of 2022 (Better Than Margot Robbie) – CINEMABLEND
Next Dodgers to release Trevor Bauer; players decided