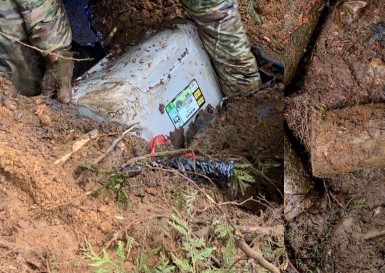 But it wasn’t until they searched a 10-acre property in Arlington where the group’s leader, Cesar Valdez, lived that they discovered where their drug shipments were stored: underground.

Valdez, a Mexican with a permanent resident card and no criminal record, used several cell phones to communicate with his operators, who distributed drugs in that region. He traveled to California to pick up the merchandise and pay your suppliers, according to the indictment.

Agents from the DEA, the FBI, Immigration and Customs Enforcement (ICE) and the Bureau of Alcohol, Tobacco, Firearms and Explosives (ATF) heard that Valdez spoke several times about laundering “hundreds of thousands of dollars” and even talked about commit violent acts against members of his own network who he believed were stealing narcotics from him.

“Wiretaps and other investigative techniques revealed a massive conspiracy to distribute large amounts of methamphetamine and heroin, as well as significant amounts of counterfeit oxycodone pills laced with fentanyl and cocaine,” court documents allege.

“They also revealed the propensity for violence of members of the drug trafficking organization, as evidenced by the intercepted communications detailed below after the seizure of an approximately 49-pound shipment of methamphetamine,” it adds.

When police arrested Valdez in the early hours of Dec. 16, 2020, at the Snoqualmie Casino, he had three firearms in his vehicle, one with a homemade silencer.

One of the pistols that were confiscated it was loaded and it was gold plated. They also seized more than $50,000 in cash from his hands, pants pockets, car glove compartment and backpacks he was carrying. Prosecutors say he went to the casino to launder money.

This is how they unearthed the drug

That same day, investigators searched multiple properties linked to this narco, including a 10-acre property in Arlington, where they had been spying on him.

the first stash They found him under an ATV Raptor all-terrain vehicle, with which they were trying to hide a wooden box that they buried two feet deep. They put a layer of gravel on top. Inside was another plastic box, where they placed four kilos of methamphetamine.

They kept looking until they discovered a circular wooden board, under a layer of mud. When moving it, they found several wrapped packages with different amounts of methamphetamine, fentanyl and heroin.

Agents also located 10 firearms, including an AR-15 rifle and a shotgun, as well as a scale and a drug sales record book. The AR-15 rifle was equipped with an attachment on the end to attach a suppressor.

The night stopped the search and while the land remained under police guard, several vehicles belonging to Valdez associates “slowly passed through the property,” the indictment describes.

Resuming the search the next morning, agents located a pile of logs freshly cut just off the ATV trail, about 300 feet from the fenced portion of the property, next to a cement pit.

While removing tree stumps and a one- to two-foot layer of dirt, officers found a plastic tub containing an ice chest and a five-gallon bucket, both sealed with cellophane and red tape. inside there was 47 pounds of methamphetamine.

“During this time, a vehicle, matching the description of one previously driven by another member of the drug trafficking organization, slowly drove past the location,” the indictment states.

There was another hiding place under a BMW car. Moving it and digging through the gravel, they found two wooden boxes, in one of which there were two kilos of heroin and about 10,000 fentanyl pills. In the other box were $290,000 in cash.

two statuettes of The holy dead and one of Jesus Malverde, images whom traffickers venerate and ask to protect their criminal activities, were also inside the wooden boxes.

He now faces a minimum sentence of 10 years in prison and a maximum of life in prison. Her sentencing hearing was scheduled for October 4.