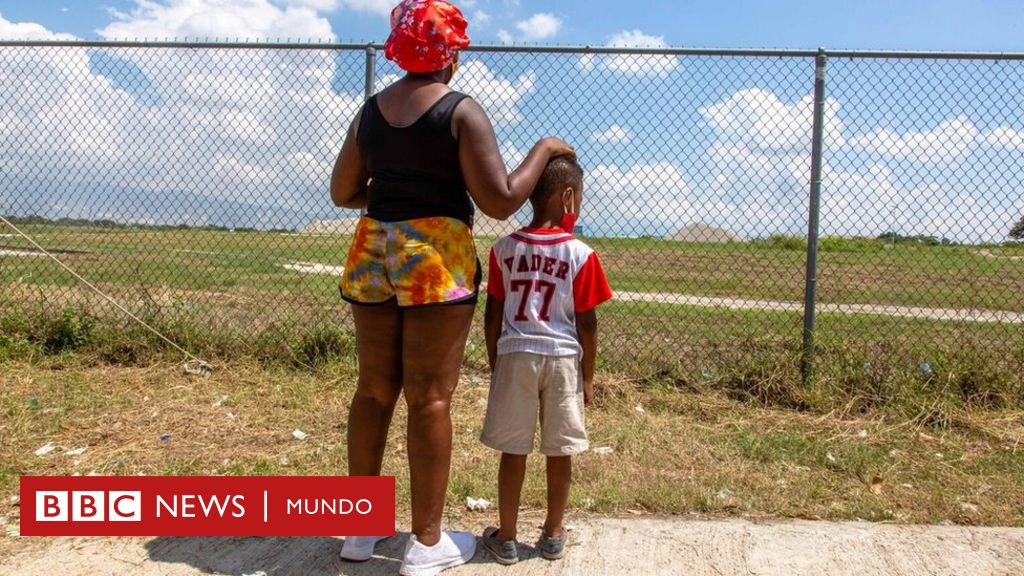 “They have been sent to hell”: the hundreds of Latin American children that the United States deported to Haiti (although they were not born there)

For more than a month, Constance and Martín *, two brothers aged 3 and 4 respectively, have been locked up with their mother for fear of kidnapping and violence in a country they do not know and hardly speak the language of.

They were born in Chile and communicate in Spanish –they actually have Chilean passports– but they were deported by immigration authorities from the United States to Haiti, one of the most dangerous places on the continent.

“We have been here for several weeks and the children do not understand what is happening. We are not going out because I am afraid that something could happen to them because here the situation is very ugly,” the mother of the minors, a native of Haiti, tells BBC Mundo.

The family left northern Chile a couple of months ago, crossed the Darien Gap in Panama, and made their way up to the northern border of Mexico, where they were arrested by the US border patrol.

“They kept us in jail for a week in Texas, without even being able to bathe. They treated us very badly. They wouldn’t even let us shower. The whites could shower and we couldn’t. They left the whites and they sent us to Haiti, where we have no family. where we have nothing, “he adds.

The woman says that her children had never been to Haiti, they are not even Haitian citizens, and says that she emigrated with them thinking that she could give them a better future in the United States.

“I wanted a better life for them and that is why I went to Chile and that is why I tried to take them to the United States. I did not want them to have to live in the danger for which I left this country and now we are here,” he adds .

Following the recent caravan of Haitian migrants that reached the southern border of the United States, thousands of them have been sent back to the Caribbean nation, including hundreds of minors who were born in other Latin American countries and they are citizens of those nations.

BBC Mundo contacted the United States Customs and Border Protection Office to find out the legal bases for the deportation of these minors to Haiti and their position on the complaints made in this story, but did not receive a response before publication.

According to figures from the International Organization for Migration (IOM), more than 800 children were deported by the US to Haiti between September 19 and November 4.

Of these, more than 400 had been born in Chile, 84 in Brazil, six in Venezuela and one in Ecuador, another in Nicaragua and another in Panama.

BBC Mundo contacted these governments to find out their positions, but most did not respond to the request for information. 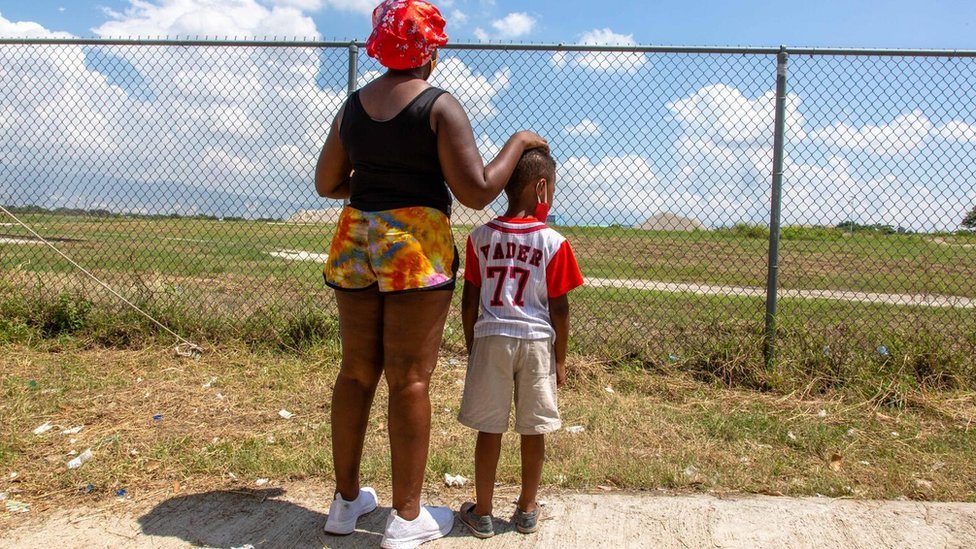 Latin American children deported by the US to Haiti

(those with verified documents, the actual number may be higher)

“That is the number of those that we have been able to confirm with some type of document, be it a birth certificate, passport or some identification. But the figure can be much higher since some do not have documents or assure that they lost them,” he said. tells BBC Mundo Giuseppe Loprete, head of the IOM mission in Haiti.

Data from Panamanian authorities indicate that of the 19,000 migrant minors who crossed its borders this year, 7,000 were born in Chile and 4,000 in Brazil, all of Haitian parents.

The journalist Mariana Sanches, from BBC Brazil, was among the first to report the deportations of children with other nationalities, especially Brazilians.

According to data from the NGO Witness at the Border, the deportation flights that have taken place in recent months are among the largest between the US and Haiti in history for a record of more than 8,000 people between September and November.

Guerline M. Jozef, director of the NGO Haitian Bridge Alliance, which represents Haitian immigrants, says the figure becomes more alarming not only because of the number, but because of the conditions of the destination to which they have been sent.

The activist explains that from a legal point of view, the US justifies the deportations in the so-called Title 42, a policy approved during the Trump administration to expressly deport undocumented immigrants, who are considered a potential public health danger from the coronavirus pandemic.

But what has sparked frequent questioning in recent times is that these minors have been deported not only to a country that is tremendously unsafe, but is also, for most of them, a foreign country.

“The deportations are based on the fact that the parents of these children are of Haitian nationality, so they are sent to the same country where the parents are sent and thus avoid family separations, as happened during the Trump term”, explains Josef.

“Now the families are deported together, but they are sent en masse to a country that does not have the conditions to receive them, of which they are not citizens and where their lives are in danger,” he says.

Several international and human rights organizations have warned in recent months about the situation in Haiti, a country that is currently experiencing a wave of kidnappings and that has not yet overcome the devastation of the earthquake last August and the political instability after the assassination of the president in July.

“The capital is going through a serious lack of fuel, there is no electricity and there is a very weak balance in all political institutions. This has made many parts of the country controlled by gangs, who frequently kidnap people, mainly children,” indicates Loprete.

The country is also experiencing a new wave of coronavirus cases and most hospitals have collapsed due to lack of energy to start their generators.

“In these conditions, it becomes very difficult to try to provide support to these families, because for some, having a charged phone is a privilege, because there is no where to charge them,” he adds.

Susanna balbo, UNICEF’s head of child protection in Haiti, says that these conditions are particularly dangerous for deported minors, who may be the targets not only of human traffickers, but also of gangs who want to demand money from their parents for thinking that, by returning from abroad, they bring savings with them.

“These children are extremely vulnerable and live in families that are also very vulnerable. They are, in most cases, people who have sold all their belongings to undertake this dangerous journey and who are basically sent to a country where they do not they have nothing, “he says.

“And in that same there is a risk – he adds – because they are people who will try again to escape from Haiti no matter under what conditions, because they feel that any unknown danger to them will be less than the danger they know living in Haiti is.”

More than a month after the deportation of these hundreds of minors to Haiti, there are no clear answers about their future.

“Children need stability, they need protection and education and it is something that they do not have in Haiti and that Haiti cannot guarantee them”, considers Balbo.

Activists and the few humanitarian organizations that remain in Haiti agree that the country does not have the resources to provide care for these minors, while the governments of the countries where they are citizens do not seem to want to respond to this situation.

“We have been in contact with several governments and I know that it has been discussed at high levels, but it is up to those governments if they will take any action to repatriate or help these children and their families,” says Loprete.

Brazil had previously announced that it will work to repatriate the nationals of that country.

BBC Mundo contacted the Foreign or Interior Ministries of Chile, Ecuador, Honduras, Panama and Venezuela to find out if their governments are aware of the situation with these children and if they have any projects to help them. but the majority did not respond to the request for information or claimed not to have data about.

“For the specific case to which you refer, we cannot provide information as we do not know specific data that allow monitoring,” said the Ministry of Foreign Affairs of Ecuador.

The Chilean Foreign Ministry commented that “currently the parents of these minors are being located and then checking their immigration status, so that the Chilean children of Haitian parents regularly residing in Chile, can return to the country by road. of the family reunification visa “.

However, it is not clear what will happen to parents who do not have a regular situation or how a visa, by itself, can facilitate the return of families that sometimes do not have to buy food for their day to day.

According to Josef, a situation like this would have been news and generated protests and diplomatic crossings and mobilized personnel from consulates and embassies … “if it weren’t for the fact that they are children of Haitian parents.”

“If any embassy or consulate is notified that more than 400 child citizens of that country are being deported to another country where they are in danger, they would surely mobilize, file complaints and try to help these minors or offer them some kind of consular assistance” , opines.

“No government has cared about these children. No government has gone to visit them, to know how they are. And I don’t think we have to think much about the reason: they are black children, of Haitian parents. The color of the passport does not matter, but that of their skin. On these issues, in Latin America, as in the United States, racism and hypocrisy are still very great, “he adds.

This is Guaidó’s opinion about proposing a referendum to Maduro 1:03 (CNN Spanish) — The ... Read more