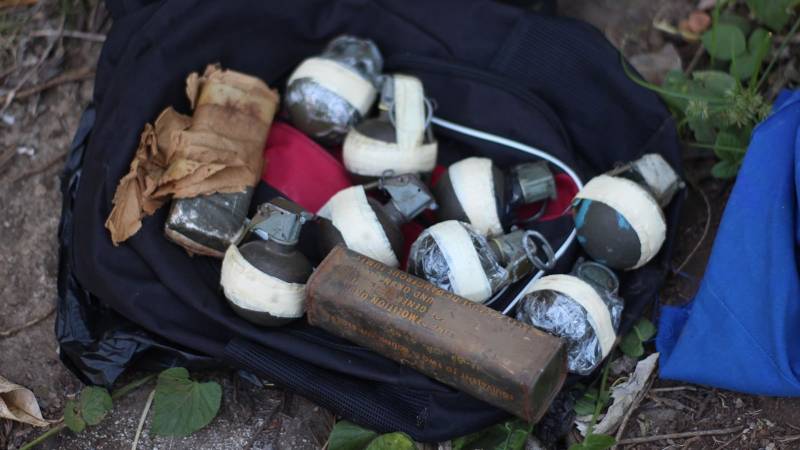 The place where they were found is territorially controlled by the Mara Salvatrucha (MS-13), the same terrorist organization to which two gang members belong that the Salvadoran government does not want to extradite to the United States.

The National Civil Police (PNC) reported on Friday morning the discovery of two C-4 explosive bars and eight offensive (attack) grenades of the M-67 type, the latter being of North American manufacture, according to the same police.

Both the C4 and the grenades are for the exclusive use of the Armed Forces of El Salvador, military sources told El Diario de Hoy.

The explosives were found in the El Jordán village of El Ranchador canton, Santa Ana municipality, a sector under strict control of the Mara Salvatrucha (MS-13), the same terrorist organization to which Armando Eliú Melgar Díaz, alias “Blue de Gangster ”, one of the two leaders that the current Salvadoran government does not want to extradite to the United States.

It might interest you: Ringleader of the MS-13 benefited from the truce was free

According to police sources, it is the Stoner Locos Salvatruchas clique, which controls the El Ranchador canton, considered a stronghold of that criminal group.

The PNC also reported that the explosives were found in a building where there were gang members, who, upon seeing the presence of the authorities, fled and left the grenades and the C4 abandoned.

M-67 and C4 grenades stolen by the military

Between 2010 and 2011, several active military personnel, including a major, several sergeants and soldiers, stole hundreds of M-67 grenades and other explosive devices owned by the Armed Forces.

They were stolen, supposedly, pretending that they were being transferred to a building belonging to the military institution in the municipality of Tapalhuaca, where they would be destroyed for being useless.

Nevertheless, Despite the confessions of several soldiers involved, in 2013 they were declared innocent by a military court.

At the end of January 2010, Héctor Antonio Martínez Guillén, an Army captain, stationed in an elite unit, sold 20 pounds of C4, two M-67 grenades, that he had extracted from the arsenals of the military garrison where he was assigned.

This officer was sentenced to 45 years in prison in the United States for drug and arms trafficking, since the delivery of the 20 pounds of C4 and the other explosives was already part of an investigation that US authorities were plotting against the Salvadoran officer.

Previous Warren Buffett spoke about the mistake that can ruin someone’s life – People – Culture
Next Lost young migrant launches SOS from the desert; tried to cross to the US 10 days ago