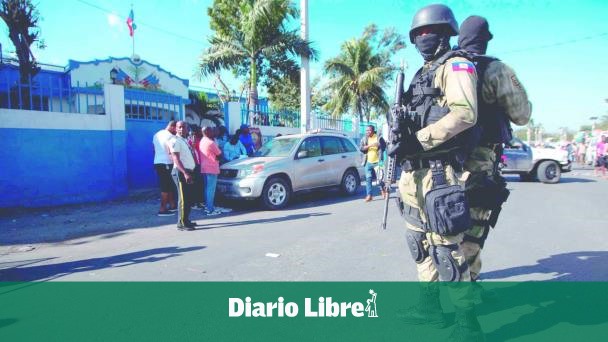 The Government assured this Thursday that Haitian gangs do not operate in the Dominican Republic, while confirming that the man arrested last May by the authorities of the neighboring country is Dominican, and that he assured that in the criminal groups of Haiti there are Dominican members.

“Dominican authorities guarantee that none of the Haitian gangs operate in the national territory,” it was stated in a statement published by the communications director of the Presidency and government spokesman, Homero Figueroa, on his Twitter account.

About the man arrested Haiti, the Government explained that he has been identified as Luis Alejandro Ortiz Mieses (alias Molaï), who was born on December 29, 1988, in the municipality of Guerra, Santo Domingo province. It was detailed that his identity was corroborated after a comparison of fingerprints, photography and in conversation with relatives, who “expressed not having contact with his relative for ten years.”

“Luis Alejandro Ortiz Mieses was declared a fugitive from Dominican justice, since 2013, for participating in the kidnapping of a merchant in the municipality of Guerra, Santo Domingo province,” the government said.

This Wednesday the Haitian authorities reported that Ortiz Mieses, arrested last May, had declared in an interrogation that he was a member of the band “Ti Lapli” and who had previously operated with a band of a certain “Ti Makak”, and who also revealed that “legions of Dominicans are an integral part of the armed gangs that currently operate in Haiti”.

According to what was reported by the Dominican Government this Thursday, the intelligence agencies of our country in their reports “do not identify other Dominicans as members of any of the active gangs in Dominican territory.”

“Haiti it does not have technology or reliable records to obtain truthful information on the identity of the members of the different criminal gangs,” the official statement points out, while noting that, on the other hand, the Dominican Republic does have a biometric registration system ” and other technologies that allow us to identify the main leaders of the gangs that operate in Haiti”.

The Minister of the Interior, Jesús Vásquez, affirmed yesterday that Haiti It is the “main threat” to the Dominican Republic and assured that the Dominican Government takes measures to prevent the passage of criminals into the territory.

The Dominican Republic has repeatedly called on the international community to act on Haiti and, more recently, Foreign Minister Roberto Álvarez raised with the UN Secretary General, António Guterres, the precarious situation that country is going through.

The expert in security Kelvin Jiménez considered that the Council of Security and National Defense must meet to analyze the threat that the participation of Dominicans in Haitian gangs, which are accused of recruiting children, would imply.

Jiménez said he was unaware that the Council of Security Citizen has met and reflected that this would be an opportunity to do so.

The insecure situation in Haititogether with the lack of opportunities, the impact of natural disasters and political instability pushes its citizens to emigrate, a pressure that the Dominican Republic receives mainly because both countries share the same island.

Dominican President Luis Abinader pointed out in his participation in the last IX Summit of the Americas that the situation in Haiti “exceeded” the limits of being a migratory problem and escalated to be a matter of security national.

They ask for support for the PNH

The highest representative of the United Nations in Haiti, Helen La Lime, asked the UN Security Council to provide more support and contribution to the fund recently established and managed by UNDP dedicated to supporting the Haitian Police.