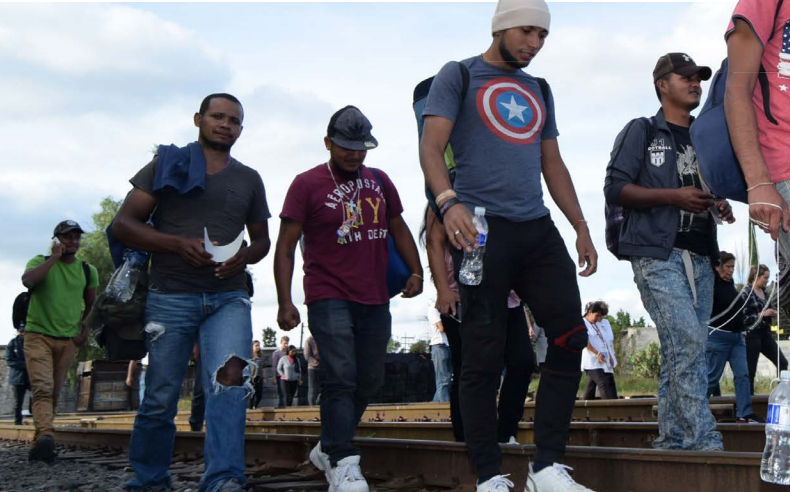 This afternoon, two migrants, one Central American and one from South America, were the first asylum seekers to be returned by USA to Ciudad Juárez, after the reactivation of the program this week “Stay in mexico“, reported authorities.

The two men, dressed in blue and gray, were handed over by US Border Patrol agents from the El Paso sector to personnel from the National Institute of Migration (INM), on the Stanton-Lerdo International Bridge, one of several crossings between the states of Texas and Chihuahua.

“Stay in Mexico”, as the Migrant Protection Protocols (MPP) are popularly known, forces asylum seekers to wait for the resolution of their request in Mexican territory.

The program, established in January 2019 by the former US president Donald trump, had been suspended since Joe Biden entered the White House in January 2021.

But a federal judge in Texas ordered their reinstatement in August, a ruling that was upheld weeks later by the US Supreme Court.

The state coordinator of attention to migrants from Chihuahua, Enrique Valenzuela, confirmed that they were two men whose cases were evaluated by US authorities.

The INM, for its part, will grant them documentation to be able to stay and work in Mexico while they await their process in the United States, Valenzuela told the AFP.

Both migrants climbed the international bridge accompanied by US agents, but Mexican authorities did not initially receive them because they did not have medical certificates.

Once the requirement was met, they entered the country and were transferred to a municipal shelter by staff from the United Nations International Organization for Migration (IOM), who provided them with information, food and coronavirus detection tests, as detailed in a statement.

The IOM insisted on the urgency of ending “as soon as possible and definitively” with this program, which it considers “inhumane and contrary to international law.”

UN asks the US to end definitively with ‘Stay in Mexico’

The United Nations, through the International Organization for Migration (IOM), called on the United States to end, definitively and as soon as possible, with the migration program ‘Stay in Mexico’.

This after recently two people were expelled from El Paso to Ciudad Juárez after the reactivation of the policy, created in 2019 by former President Donald Trump, under the name of Migrant Protection Protocols (MPP).

The immigration policy that forces asylum seekers in the United States to remain in Mexico while their immigration status is resolved in court was suspended by Joe Biden after his arrival at the White House, however, after a series of lawsuits promoted by governors Republicans, the Supreme Court finally issued a resolution ordering the Democrat to reinstate the program.