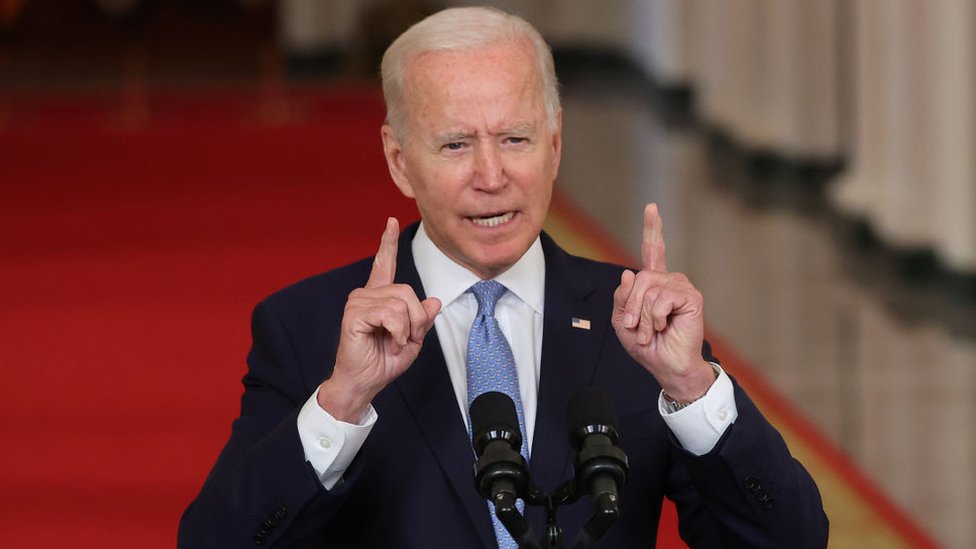 The government of Joe Biden, president of the United States, suspended this Tuesday the entry into the North American country as immigrants or non-immigrants, to all officials of the Daniel Ortega regime, including his wife and designated vice president, Rosario Murillo, members of his administration, mayors, police, military, elected officials, and families of all the above, for repressive acts and violation of human rights.

Through a statement, President Biden affirms that the decision obeys “in light of the importance for the United States of promoting democratic processes and institutions in Nicaragua to help the Nicaraguan people achieve their aspirations for democracy, and given the suppression of rights Humans and Democracy in Nicaragua ”.

It also indicates that “the generalized impunity for crimes committed against opposition actors; the persistent corruption practiced by Nicaraguan government officials in the performance of public functions that has eroded democratic institutions; and the continuing failure of President Daniel Ortega, Vice President Rosario Murillo, Nicaraguan government officials, and others to support the rule of law, human rights, and other high-priority principles for the United States demands a strong response. “

Also read: Antony Blinken celebrates sanctions from Canada and the United Kingdom to officials of the Ortega regime

Therefore, it states that it “has determined that it is in the interest of the United States to restrict and suspend the entry into the United States, as immigrants and non-immigrants, of members of the Nicaraguan Government, led by President Daniel Ortega, including his wife and Vice President Rosario Murillo, and others described in this proclamation who formulate, implement or benefit from policies or actions that undermine or damage democratic institutions or prevent the return to democracy in Nicaragua.

The proclamation will remain in effect until terminated by the President of the United States. “The Secretary of State will recommend, depending on the circumstances, whether the President should continue, modify or terminate this proclamation,” the document states.

Biden, who on November 10 signed and proclaimed the Law to Strengthen Nicaragua’s Adherence to the Conditions for the Electoral Reform or the Renacer Law, maintains that the “repressive and abusive acts” of the Ortega government and those who support it “oblige to the United States to act.

Also read: When will the effects of the Renacer Law begin to be seen on the Ortega regime?

“The repression of the Ortega government against opposition leaders, civil society leaders and journalists in preparation for the Nicaraguan presidential and legislative elections of November 2021 damages the institutions and processes essential for the functioning of a democracy. The authoritarian and undemocratic actions of the Ortega government have paralyzed the electoral process and deprived Nicaraguan citizens of the right to elect their leaders in free and fair elections, “says the US president.

In the Proclamation, it adds that “the detention and denial of fair trials by the Ortega government of peaceful protesters, civil society leaders, private sector leaders, student leaders, political leaders, journalists, and presidential candidates in Nicaragua stifles political discourse. and the democratic process. The police and penitentiary authorities contribute to the repressive climate promoted by the Ortega government by carrying out arrests and detentions for political reasons of people who exercise their human rights and the solitary confinement of political prisoners, without access to lawyers, family members and necessary medical attention » .

It adds that “the Ortega government controls multiple security services, including non-uniformed, armed, and masked para-police officers, who abuse people to promote the authoritarian agenda of the Ortega government, including harassing, threatening, and committing violence against those who oppose the government. . Members of the Nicaraguan National Police (PNN), along with violent mobs of pro-government supporters also controlled by government actors, have attacked religious institutions in retaliation for their support of political and religious leaders.

The Proclamation suspends entry into the United States, as immigrants or non-immigrants, of the following persons:
(a) Members of the Government of Nicaragua, including elected officials and their personnel;
(b) Mayors, vice mayors or political secretaries who planned, ordered, assisted, aided and incited, committed or otherwise participated, including through command responsibility, gross abuses or human rights violations to punish peaceful protesters or deny the fundamental freedoms of Nicaraguans. , or who tried or conspired to do so;
(c) Officials of the Nicaraguan security services, including the Nicaraguan Army, PNN, Directorate of Special Police Operations, vigilante groups, and paramilitary groups;
(d) Officials of the Nicaraguan prison administration;
e) Senior members of the Judicial Power, Public Ministry and Ministry of the Interior of Nicaragua;
(f) Members of Nicaraguan government ministries, regulatory agencies, parastatal companies, higher education administrators and professors, and elected officials who take actions, including human rights abuses, to deny services to those who make peaceful efforts to demand the return to democracy in Nicaragua;
(g) Non-governmental persons acting as agents or acting at the behest of those described in subsections (a) – (f) of this section to facilitate or obtain financial benefits from policies or actions, including electoral fraud, rights abuses human rights, or corruption, that undermine or damage democratic institutions or impede the return to democracy in Nicaragua; and
(h) The spouses, sons and daughters of the persons described in subsections (a) – (g) of this section.

Also read: Number of deaths due to repression in Nicaragua, in 2018, rises to 355, according to IACHR

This Monday, after the sanctions against officials of the Ortega regime, made official by the United Kingdom and Canada, the US Secretary of State, Antony Blinken, celebrated the measures through a statement. On the same day, the United States government also announced sanctions.

“We are pleased that Canada and the United Kingdom have also imposed specific measures today. As the General Assembly of the Organization of American States (OAS) made clear, on November 12, under the presidency of Ortega and Vice President Murillo, the Nicaraguan government is moving toward greater isolation if it continues to undermine democracy and deny the Nicaraguans their human rights, “Blinken said in an official statement.

To whom it will not apply

The Biden Proclamation clarifies who will not be subject to this restriction:

a) Any lawful permanent resident of the United States;
(b) Any individual who has been granted asylum by the United States, any refugee who has already been admitted to the United States, or any individual who has been granted withholding of deportation or protection under the Convention Against Torture and Other Treatment Cruel, Inhuman or Degrading or Punishment
(c) Any person covered by article 1 of this proclamation (list of persons subject to entry restriction), when the Secretary of State determines that he has ceased actions that undermine democratic institutions and has taken concrete measures to help restore democracy in Nicaragua; or
(d) Any covered person described in the entry restrictions of this proclamation, once the Secretary of State determines that the person’s entry would not be contrary to the interests of the United States.

It may interest you: What does it mean for Daniel Ortega that almost his entire team of economic advisers is sanctioned. Black year for the cabinet

Biden refers to the mayors and the Judiciary

In the Biden Proclamation he refers to municipalities and the judiciary.

And he adds that “the judiciary has failed the Nicaraguan people by helping and inciting the Ortega government to use politically motivated charges to lock up political prisoners. By stacking the judiciary with government-controlled judges and prosecutors, the Ortega government has abused the justice system to silence critics. The authorities have held many political prisoners incommunicado for months, without access to their lawyers and without knowledge of the false charges brought against them.

Previous A 78-year-old woman who did not reside in Puerto Rico dies of COVID-19
Next Spain, the eighth most expensive country in Europe to hire the Internet