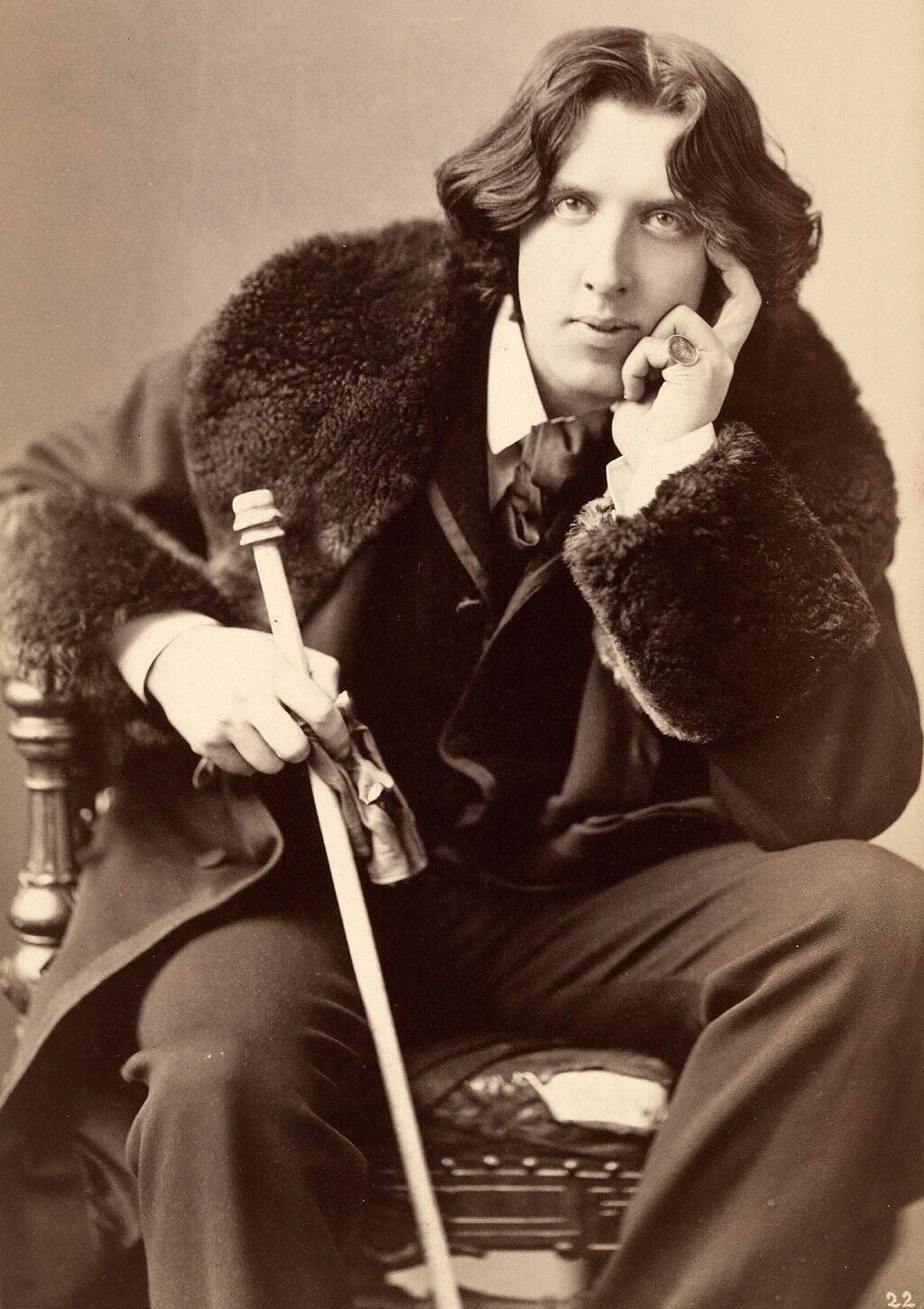 The day Oscar Wilde was released from prison 125 years ago there were no crowds waiting for him, despite the fact that until just two years earlier he was the most famous person in London, the British capital.

Not only was he a celebrated poet, playwright and novelist, but in the spring of 1895 he had starred in a three-act spectacle that captivated Britain and much of the literary world.

The scene had been Old Bailey, the central court of England and Wales, where he appeared first as the accuser and then twice as the accuseduntil he was sentenced to two years of forced labor for being homosexual.

It was the maximum sentence for the crime of “flagrant indecency”, but for the judge, a “totally inappropriate” punishment given the seriousness of his “crime”.

The crime, of course, was to have convicted him, as the UK government confirmed 120 years later when it pardoned him posthumously, with the ‘Turing Law’ of 2017 (named after British WWII codebreaker Alan Turing). ), which exonerated more than 50,000 men convicted of homosexuality.

Obviously very late. The damage to Wilde’s reputation was irreparable, at least during his lifetime.

But the man who had written the philosophical novel “The Picture of Dorian Gray”, as well as entertaining and witty plays such as “Lady Windermere’s Fan” (1892), “A Woman of No Importance” (1893) and “The Importance of Being Earnest (1895)”, he was not going to be easily forgotten.

Legions of admirers have not stopped celebrating and clever phrases like “We are all in the gutter, but some of us look at the stars”, “The only way to get rid of temptation is to fall into it” or “Always forgive your enemies, nothing bothers more” are now circulating on the networks.

However, there are things that are sometimes forgotten, like…

He was not the only renowned Wilde

His father, Sir William Wilde, was a respected otolaryngologist who revolutionized the treatment of ear infections (And he also had a reputation as a ladies’ man; before marriage he was the father of three children by two different women out of wedlock).

Oscar’s mother was Jane Elgee, an Anglo-Irish revolutionary poet who wrote under the pseudonym Speranza.

Growing up, Wilde was influenced by both his mother’s Irish nationalist politics and his father’s philanthropic tendencies.

At Trinity College, Dublin, he was introduced to Greek literature that would greatly influence his later works and beliefs.

He believed in ‘art for art’s sake’

While at Trinity, and later at Oxford University’s Magdalen College (which he attended from 1874 to 1878), Wilde was known for his advocacy of aestheticism, an intellectual movement that centered on the idea that art it should not exist for any other reason than beauty.

Drawing on the work of the 18th-century philosopher Immanuel Kant, esthetes opposed the Victorian idea that art could be a tool for social education and moral enlightenment.

For them, whatever morality or usefulness a work might bring was irrelevant.

During his time at Oxford, Wilde made “aesthetic style” his own: growing his hair long, dressing in extravagant fashions, and assuming exaggerated affectations.

She once declared, “I wish I could live up to my blue china!”

Wilde became an icon of the beautician movement and his only novel, “The Picture of Dorian Gray” is considered a great example of aesthetic theory and the interplay between art and morality.

During his youth in Dublin, Wilde had fallen in love with the beautiful and witty Florence Balcombe.

In “Wilde’s Women,” Eleanor Fitzsimons recounts that Wilde wrote to a friend about her: “I am going out to take an exquisitely pretty girl to evening mass at the cathedral. She is 17 years old, the most beautiful face I’ve ever seen and not a dime. I’ll show you his picture the next time I see you.”

To Wilde’s disappointment and despite their courtship, Balcombe chose to marry Irish author Bram Stoker, who would later gain fame as the creator of “Dracula.”

Fitzsimons notes that although Wilde was heartbroken, he proposed to two other women before he met Constance Lloyd, the woman who would become his wife.

Wilde met Lloyd, the daughter of an Irish barrister, in 1881. They married in 1884 and had two sons, Cyril and Vyvyan. Many of her letters demonstrate deep affection: “As long as I live, you will be my lover,” Lloyd wrote in response to Wilde’s proposal in 1883.

Around the time of the birth of the couple’s second child in 1886, Wilde met Robbie Ross, a 17-year-old Canadian journalist and art critic who was openly gay. Shortly afterward, Ross moved into the Wilde family’s home and, according to many sources, they had a relationship.

From then on, Wilde became more open about his taste in men.

He inadvertently caused his own judgment

In 1891, Wilde embarked on a stormy relationship with Lord Alfred ‘Bosie’ Douglas, a handsome and poetic 21-year-old Oxford student.

Douglas was Wilde’s beloved muse, but also a petulant burden who was often reckless with Wilde’s affections and money.

The couple argued and reconciled frequently.

In a letter in mid-1894, Wilde wrote to Bosie: “I cannot live without you. You are so dear, so wonderful. I think of you all day and miss your grace, your youthful beauty, the sparkling swordplay of your wit, the delicate fantasy of your genius.”

Suspecting a relationship between his son and the playwright, Bosie’s father, John Douglas, the Marquess of Queensberry, began harassing Wilde in an attempt to break up the relationship.

In February 1895, Queensberry left a visiting card with the Albemarle Club in London, of which Wilde was a member.

The message on the card read: “To Oscar Wilde posing as a Somdomite [sic]”, although there is still debate about the words and their meaning, due to Queensberry’s lyrics.

Seeing it as a public accusation, and against the advice of many of his friends, Wilde sued Queensberry for criminal libel.

Queensberry, known for his belligerent attitude, gathered abundant evidence that Wilde had solicited male prostitutes and forced witnesses to testify against the writer.

Despite displaying his characteristic wit during the trial, Wilde was unable to refute Queensberry’s accusation.

In a humiliating setback, the marquess was acquitted and immediately prepared to bring charges against Wilde for “gross indecency” and sodomy, charges that criminalized homosexuals.

They applauded him in court

On April 6, 1895, Wilde was arrested and charged, and two highly public and damaging trials followed, in which Wilde pleaded not guilty.

In a memorable moment in the first trial, Wilde was savagely questioned about the meaning of a phrase from one of the poems he had dedicated to Bosie that the prosecution thought was a euphemism for homosexuality: “The love that dares not Say your name.”

“In this century, it is similar to the intense affection of an adult for a young man, as it was between David and Jonathan, as Plato made the basis of his philosophy, and as you find in the sonnets of Michelangelo and Shakespeare.

“It is that deep and spiritual affection that is as pure as it is perfect. It dictates and permeates great works of art like Shakespeare or Michelangelo, and those two letters of mine.

“It’s misunderstood in this century, so misunderstood that it has to be described as ‘love that can’t tell its name’ and because of it I’m here now. It’s beautiful, it’s magnificent, it’s the noblest form of caring.

“There’s nothing unnatural about it. It’s intellectual, and it repeatedly exists between an adult and a young person, when the adult has intellect and the young person has all the joy and hope and glamor before him. That would be what the world does not understand. The world makes fun of him and sometimes puts someone in the pillory “.

Wilde received applause in court for his response.

He wrote one of his most famous works in his cell

Back then, the British prison system was designed to subject prisoners to hard physical labor and silent meditation on their crimes.

Wilde’s life in prison was arduous and bleak: he spent 23 hours a day in his cell, with little contact with other inmates, and had to work on a treadmill.

Although he was prohibited from writing plays, prose, or poetry while serving his sentence, he was allowed to write letters.

He discovered that the prison regulations did not specify how long a letter had to be and that if a letter was not finished, the prisoner could be allowed to take it with him when he left the prison.

So, during the last three months of his sentence, Wilde worked on the letter that would later become known as “De Profundis” (Latin for “from the depths”), which was published after his death.

He died destitute in Paris

After his release, Wilde was irrevocably affected by his imprisonment; his health was weak and he was broke.

He left the UK and assumed the name Sebastian Melmoth, inspired by “Melmoth the Wanderer”, a 19th-century gothic novel by Irish writer Charles Maturin.

Although Oscar’s wife, Constance, continued to support him with a financial stipend for some time after his release, she remained in England with their two children and changed her surname to ‘Holland’ to escape scandal.

With the exception of the “Ballad of Reading Gaol” (1898), a scathing indictment of the Victorian penal system first published under Wilde’s prisoner identification number, C3-3, he wrote little else during this time.

To a friend he said, “I can write, but I’ve lost the joy of writing.”

the health of Wilde continued to deteriorate and suffered public abuse and humiliation, often ridiculed and jeered by those who recognized him.

He died in the dilapidated Hotel D’Alsace in Paris in the company of some friends and a Catholic priest at the age of 46 on November 30, 1900 after suffering from meningitis.

* This article is adapted from “7 Things You May Not Know About Oscar Wilde” by Elinor Evans, online editor of BBC HistoryExtra magazine.

Remember that you can receive notifications from BBC Mundo. Download the new version of our app and activate it so you don’t miss out on our best content.