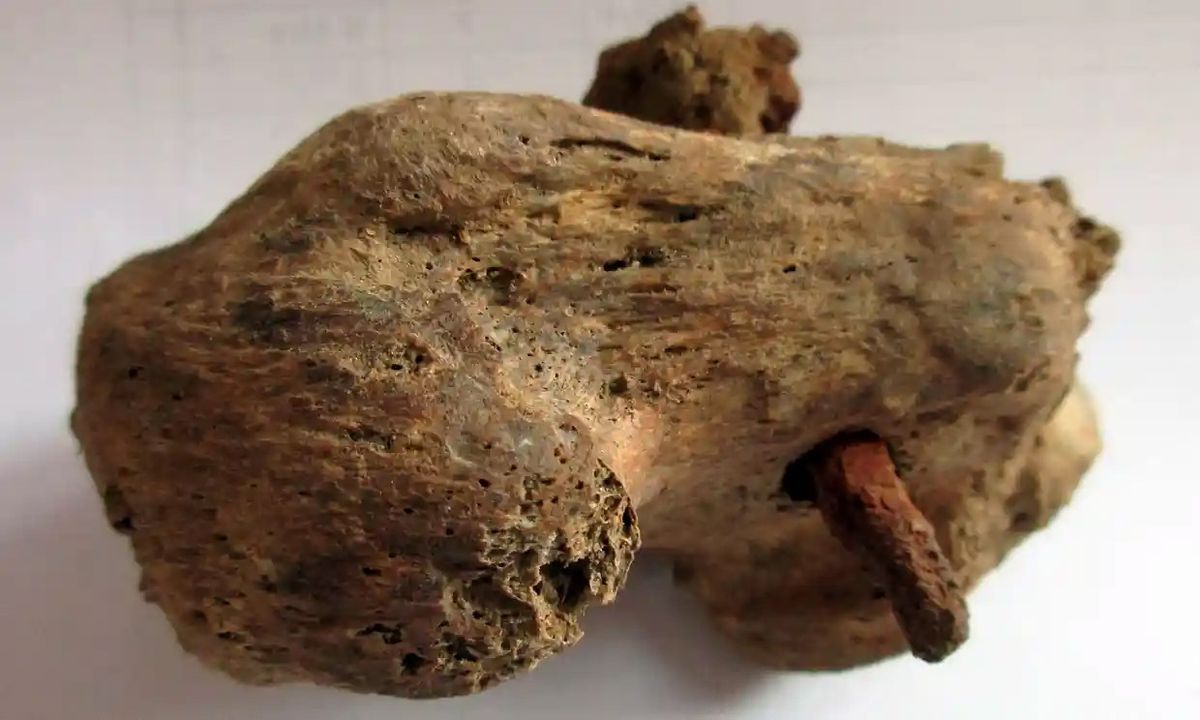 Nobody knows what his name was, that is why archaeologists call him with the cold appellation of Skeleton 4926, one of the 48 bodies found in November 2017 – five of them corresponding to children – while a plot was excavated in the town of Fenstanton, in the county of Cambridgeshire (United Kingdom), to build a residential complex. Now the magazine British Archeology has revealed that this person was crucified about 1,900 years ago and that even the nail that pierced his right heel is preserved, which makes it, according to experts, “the best physical evidence of a crucifixion in the Roman world.” He is also one of the few tortured victims of whom the pointed metal key that pierced his foot is preserved, because these pieces of iron were stolen after the cruel death of the inmate as it was considered that they carried magical or healing properties.

Article Crucifixion in the Fens: life & death in Roman Fenstanton (Crucifixion in the Fens: life and death in the Roman Fenstanaton), signed by archaeologists David Ingham and Corinne Duhig, from the University of Cambrigde, explains that the body, which corresponded to a man between 25 and 35 years old, was buried after his death in an oak wood coffin, something extremely unusual because he was condemned to death by the authorities of Rome. In addition, experts believe that this unfortunate spent his life as a simple slave, since the bones of his shins are extremely worn, “as if he had permanently worn chains”, they assert.

The martyrdom of the crucifixion, according to J. Gunnar Samuelsson, of the Department of History of the University of Gothenburg (Sweden), was devised by the Persians, adopted by the Carthaginians and copied by the Romans after defeating the Punics. It was carried out in squares, public spaces and roads to serve as an example to those who wanted to violate the law. It was reserved only for “enemies, criminals, rivals and slaves and did not apply to the highest elements of Roman society,” Samuelsson argues.

There is also evidence that one of the most cruel and ruthless representations of this torture took place on the Via Appia, in Rome, after the rebellion of the slave Spartacus, when more than 6,000 people were murdered in 71 BC. . C.

The death of the prisoners was produced mainly by suffocation. The condemned man, after being tied or nailed to the deadly post, soon suffered difficulties in exhaling, a painful process that prevented him from eliminating CO2 from his lungs (hypercapnia), while oxygen was also scarce in a few minutes. The crucified man, in a desperate attempt to carry out the inspiration process, leaned on his feet, with which the pain increased in his extremities and the agony increased. If the executioner took pity on him, he would break his legs to make death faster.

All the culture that goes with you awaits you here.

The Fenstaton crucified, according to the report from the University of Cambrigde, lived in a town built next to the so-called Via Devana ―the route that linked two important Roman cities at that time: Cambridge and Godmanchester―, which currently corresponds to the highway A14. This settlement, according to the study of Ingham and Duhig, remained for centuries “judging by the high number of coins found during excavations and the large volume of pottery and animal bones found.” Experts believe that the town extended about six hectares and that its first inhabitants settled there in the Late Bronze Age (150 BC – 50 AD).

The body of the unfortunate 4926 was buried face up, in a north-south direction and with the hands folded on the pelvis. His mortal remains appeared, in addition, surrounded by 12 nails: one next to the head, another near the feet, five forming a line in the upper part of the tomb, four making a curve on the lower side, plus the one that crossed his ankle.

When the skeleton was exhumed, and since the body was covered in mud, the nail embedded in its heel was barely visible, so all the bones were transferred to a laboratory in the city of Bedford for “routine analysis”. However, when technicians cleaned up the skeletal remains, they discovered metal crossing the heel bone.

Ingham, project director of the consultancy that carried out the excavation, Albion Archeology, told the newspaper on Wednesday The Guardian: “We know a lot about crucifixions, how they were practiced and where thanks to historical accounts. However, this is the first tangible evidence to really see how they worked. “

The importance of the finding also lies in the fact that it is the only one with physical evidence found in northern Europe, the fourth in the world, although in two of these cases the nails were not found. The best known took place in Jerusalem (Israel) in 1968 during some works. The nail had the same position as that of the British case, although it was worse preserved. Some researchers, in recent years, have also pointed out serious errors in the process of investigating these remains and data that supposedly do not coincide with the initial reports.

On the other hand, it is very unusual that the body of a martyred on the cross, as is the case of the man from Fenstaton, was recovered by his friends or relatives, returned to the town where he was originally from or lived and buried with other people from the locality, especially when the status of the executed was the lowest in Roman society: slave. Scientists also do not know the exact place of his crucifixion, but it was possibly near the burial, on the other side of present-day A14, that pole holes and trenches have been detected.

Radiocarbon has dated this man’s death to between 130 and 360 AD. C. DNA analysis, on the other hand, shows that it was not related to any of the other bodies found at the site – four small and nearby cemeteries – and that it was genetically part of the native population, not the Roman one.

Ingham hopes that a 3D replica of the nail-embedded heel bone will soon be on display at the Cambridge Museum of Archeology and Anthropology, where it will be remembered that Emperor Constantine ended this heinous practice of execution around 337 AD. .