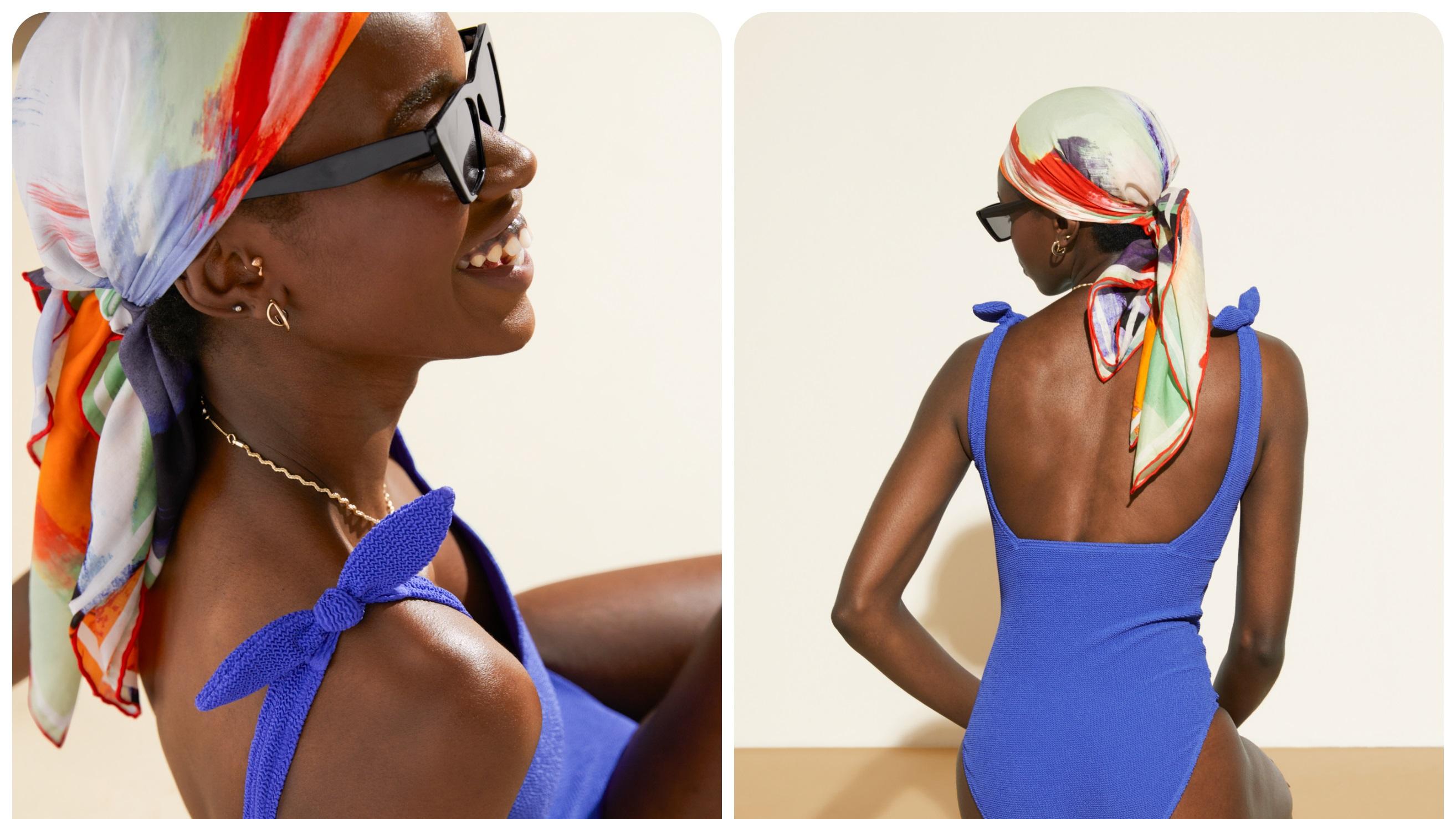 “Your hair contains a whole dream, full of sails and masts; they contain vast seas, whose monsoons take me to climes of enchantment, where space is bluer and deeper”, wrote the romantic poet Charles Baudelaire. When we open the closet, we often sin by dressing from the feet, without thinking of turning our head into a stylistic standard if it is not for the jewels that, on beach and summer days, tend to remain in the background. Thus, the scarf has established itself with all its symbolism and sophistication as the ideal accessory to show off fresh and very feminine looks that begin by raising your hands to your head.

Audrey Hepburn, Brigitte Bardot, Jacqueline Kennedy, Grace Kelly, Catherine Deneuve, Amy Winehouse, Miley Cyrus and Zendaya. More than half a century wearing scarves in her hair that have been immortalized by big fashion heads, by the celluloid industry and, obviously, by paparazzi and street style photographers. ”If we think of all these celebrities we can see them with berets, headdresses or pillbox hats, but there is no doubt that we also see them with a scarf tied around their chin, as a ribbon in their hair or as a hood tied around their neck. . It doesn’t matter if some are considered more of the high society or protagonists of the catchy songs of the summer or of the films that devastate the box office. With a scarf on her head, her looks acquire that longed-for sophistication that we all want, and more so in summer, when we don’t have so many layers to make our clothing envious”, says Manuela Lombardi, professor of Iconography at the Istituto Marangoni in Milan.

The scarf arrives in Madrid in 1844, quickly becoming the essential accessory of the upper class

Born in Ancient Greece, the scarf took on special relevance in Imperial Rome with Emperor Nero, who used it to protect himself from the sun in circus shows. Decades before, the poet Catullus had written that giving a handkerchief as a gift was a splendid gesture, especially if it was of great quality and fame, like those that were already being manufactured in Valencian Játiva. Already in the 17th century, handkerchiefs used to be perfumed so that, when airing them, the fragrances of monarchs and aristocrats would spread and thus remind them of their high position.

But we women had to wait to wear it with that same exquisiteness until the capricious Marie Antoinette ruled that all scarves should be square. Since then, this accessory prevailed among the wealthy classes and began to be susceptible to trends. In 1844 she landed in Madrid. The most desired handkerchief then was called à la fleur de Marie, decorated with floral motifs and birds of paradise, worn by both men and women of the upper class.

The most desired scarves are silk and her fetish brand is Hermès, whose carrés have spent decades decorating the face, neck and even the handles of her prized bags with motifs inspired by landscapes, animals, in collaboration with renowned artists from all disciplines. artistic… Eternally functional as well as elegant, they began to conquer the jet set of the fifties.

“Since then, every decade has had a fashion related to the scarf as an it accessory. In the forties and fifties we saw it around the neck, tied diagonally to the chest and even in some cases as a replacement for the hat when temperatures rose. In the sixties it was imposed as a bandana, top and even pareo, something that in the seventies conquered the new generations and the hippie movement. In the eighties it even took the form of a blouse, with the ends crossed at the neck and tied as a Halter neck, pure Studio 54 style, or as a headband or hair tie, as Madonna popularized and Amy years later”, adds Lombardi.

A good example of the current spirit is the mixture of all the past trends, something that we see both in historical maisons, such as Hermès, with designs that mix the floral motifs of the seventies with pop details such as polka dots on tennis caps; and Dior, with Maria Grazia Chiuri at the helm, who has finished off practically all of her latest fashion shows with scarves.

Last May, the Italian firm Forte Forte presented its collaboration with the legendary perfume brand Acqua di Parma at an event at its Madrid store. Actresses and models attended, such as Inés Sastre, Natalia Verbeke and Leticia Dolera, as well as influencers Grace and Melissa Villarreal, and Anna Ponsa, among others. All of them were enthralled by Forte Forte’s incredible silk scarves and sarongs, which will take the lead in this summer’s looks for the international jet set in Capri, Portofino and the French Riviera.

This fresh and chic trail is closely followed by firms such as the Venezuelan Alesia, with scarves as a top, and the Catalan Sita Murt, with large-format proposals ideal for showing off your back, brimming with elegance and savoir-faire. In more rustic airs are the proposals for hair, recalling the hoods, from the British firm The Vampire Wife, created by Susie Cave, the wife of singer Nick Cave and whose designs have been worn by Sienna Miller, Keira Knightley, Cate Blanchett, Alexa Chung , Dakota Johnson and Jennifer Aniston.

In these reminiscences of the English countryside, we find the handkerchiefs produced in Spain and hand-edged in Galicia by Xiana Cobo. “It is a accessory halfway between an accessory and a garment. Some can even have the status of a jewel, due to their materials, finishes… What I like the most is that they are the best ally to give your look personality and there is always a way to use it that suits your style. ”, the designer tells us.

“For more informal beach looks that protect you from the effects of the sun, the nineties bandana returns, which is placed showing a bit of hair peeking out from the front. But the most successful trend is the pirate-style scarf, which you can use both for an informal look and for a party one”, explains Jaume Solé, founding partner and artistic director of Salón Bo in Barcelona. In this line we find the scarves from @ Other Stories and Pardo Hats, which demonstrate how this accessory takes the reins of the best outfits on the coast.

Wicker, esparto grass, linen… there are many textures that we unconsciously associate with summer, but there is another that is now sweeping accessories such as the sixties-inspired bikinis and beach bathrobes from Bohodot and La Veste, the firm of Blanca Miró and Maria de la Orden: the towel, which also dazzles in scarves that act as a top and that cover the hair while we sunbathe.

Judith Arnabat, image consultant and personal shopper tells us how to choose the scarf that is going to favor us the most: “The first thing to take into account is the color, since it is the perfect opportunity to bring those tones that suit us best and they bring us beauty; The fabric is also important, because of course a silk scarf will not be the same as a linen foulard: each one will give us a totally different image. Finally, we must not forget the size and shape of the scarf, since, for example, squares are much more complicated to place than long rectangular ones”.

Once we have chosen the one that best suits our physiognomy and style, it is time to install it. “We can use it so that in addition to providing that je ne se quois that elevates the whole look, it enhances or neutralizes certain parts of our figure. For example, simply passing it around the neck without knotting in front, it will create two vertical lines that will lengthen our figure. Those who want to enhance the volume of the chest are best knotted on top of it. For those with a long neck, a small one tied around it is ideal”, adds Arnabat, who is also a teacher at the School of Fashion Arts and Techniques (EATM) in Barcelona.

No doubt. The scarf is no longer just that accessory that covers our neck to avoid colds, even in summer. It is the ideal wild card to enhance all styling and, at the same time, our unique beauty.