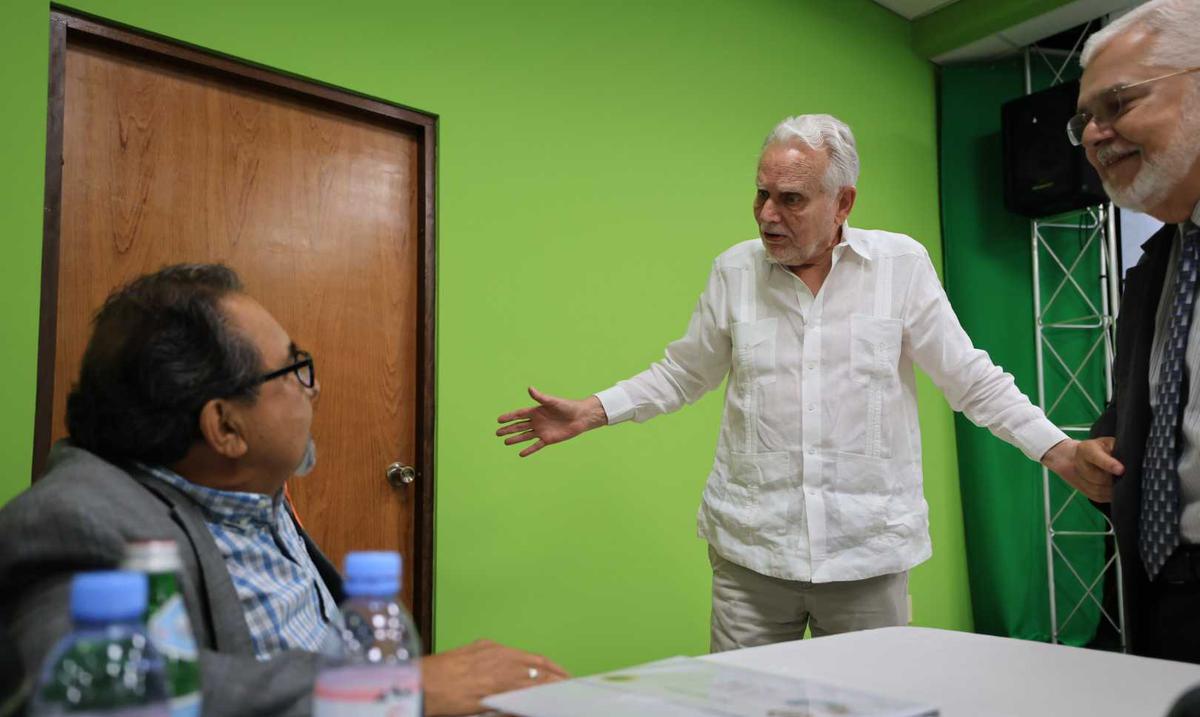 The leadership of Puerto Rican Independence Party (PIP) today warned members of Congress that the draft legislation they have proposed to call a plebiscite on the political future of Puerto Rico “is doomed to failure” while it seeks to commit the federal government to an offer of statehood for the Island.

“That’s the poison pill…It’s the elephant in the room,” said the general secretary of the PIP, Juan Dalmau Ramírez, together with the president of his community, Rubén Berríos Martínez, senator María de Lourdes Santiago and the constitutionalist Carlos Gorrín Peralta, after meeting with the president of the Natural Resources Committee of the Lower House Raúl Grijalva (Arizona), the Puerto Rican Democrats Nydia Velázquez and Alexandria Ocasio Cortez, elected by New York, and the Resident Commissioner in Washington, Jennifer Gonzalez.

During the meeting, which lasted for an hour and had a very cordial tone -as was evident during and after the meeting-, the community delivered a document to the federal legislators in which it defined its position regarding the draft legislation.

“If we are serious, we have to recognize that the great obstacle and the source of the vast majority of the problems in Congress to advance a true process of self-determination is the alternative of statehood,” maintained the PIP, although its leaders recognize that at this time there is no room in Congress to open a deep discussion about its relations with Puerto Rico.

Dalmau Ramírez affirmed that any effort by Congress to explore a process on the political future of Puerto Rico that includes statehood, “has the obligation to face the complexities of statehood,” such as the supermajority requirements, the fiscal complications that it would face the Island and the consequences for the United States of admitting a “Caribbean and Latin American nation” as a state, which has Spanish as a common language, and the operations of its public structures.

Berríos Martínez said that they explained to the federal legislators that it is not credible to think that if statehood obtains a slight majority again, as in the 2020 referendum – when it obtained 52.5% of the votes -, Congress will convert Puerto Rico in its 51st state. He also recognized that a comprehensive proposal on the political future of the island would require consideration by other congressional committees, such as those responsible for financial and tax issues.

“In the United States there may be respect and tolerance towards certain manifestations of cultural diversity (although in these times less than until recently) but there is no doubt that the United States is not and does not aspire to be a multinational country, converting other nations in the state of the union,” said the PIP.

The PIP stressed that Puerto Rico does not meet other traditional parameters to admit a territory as a state, such as the ability to sustain the economy and at the same time make a fair contribution to the federal treasury.

During the meeting, the PIP leadership reaffirmed its support for the convening of a Constitutional Status Assembly and stressed to federal legislators that any status process must take into account Puerto Rico’s right to self-determination and independence.

He also recognized that at this time, in any case, no proposal on the political future of Puerto Rico is going to advance in the US Senate.

“Beyond what can be achieved this year in the House (and a lot of attention to the torpedo of an amendment to include the territory of the Commonwealth as an option that will surely promote the PPD) it is evident that in the Senate the doors are closed to lime and singing. Few senators there are interested in talking about the elephant in the room,” said Dalmau Ramírez, referring to statehood.

Regarding the definition of independence, the PIP maintained that it should include issues related to trade and public debt, among others. “Regarding sovereign free association, other alternatives should be explored in relation to citizenship (dual or reciprocal) and in addition to what would be the powers that would be delegated to the United States, and for how long,” said the political formation.

The PIP, although it considers that the statehood proposal in a binding bill for the federal government will not allow a decolonization process to advance for the Island, praised that the draft legislation proposes to exclude the current territorial or colonial status, commonly called the Free State. Associate (ELA).

“In Puerto Rico, in any case, it is not in dispute that the very clear majority has repudiated and repudiates the continuation of the colonial and territorial regime,” the PIP indicated.

Bearing in mind that the legislative proposal that the Democratic leadership of the federal lower house has embraced will not finish its process in this session, the PIP affirmed that it is betting on the strengthening of “a new correlation of political forces that can manage to elect (in 2024) a governor who has the decolonization and regeneration of the country as his most urgent priority.”

After the meeting, Congresswoman Velázquez pointed out that the PIP’s position “is part of the input” that will be taken to Washington. “We will meet and continue the negotiations,” Velázquez said.

The group of federal legislators meets today, Friday, with the directors of the Puerto Rican political parties, prior to a public forum that they will hold on Saturday to listen to organizations and the general public.

For Commissioner González, part of the federal delegation and the Natural Resources Committee, the meeting with the PIP was her first visit to that central committee.

Previous Piqué returns home without a key, knocks on Shakira’s door, she opens it and they leave together
Next Prince Harry and Meghan Markle return to Buckingham, but run out of room on the balcony of honor with the queen