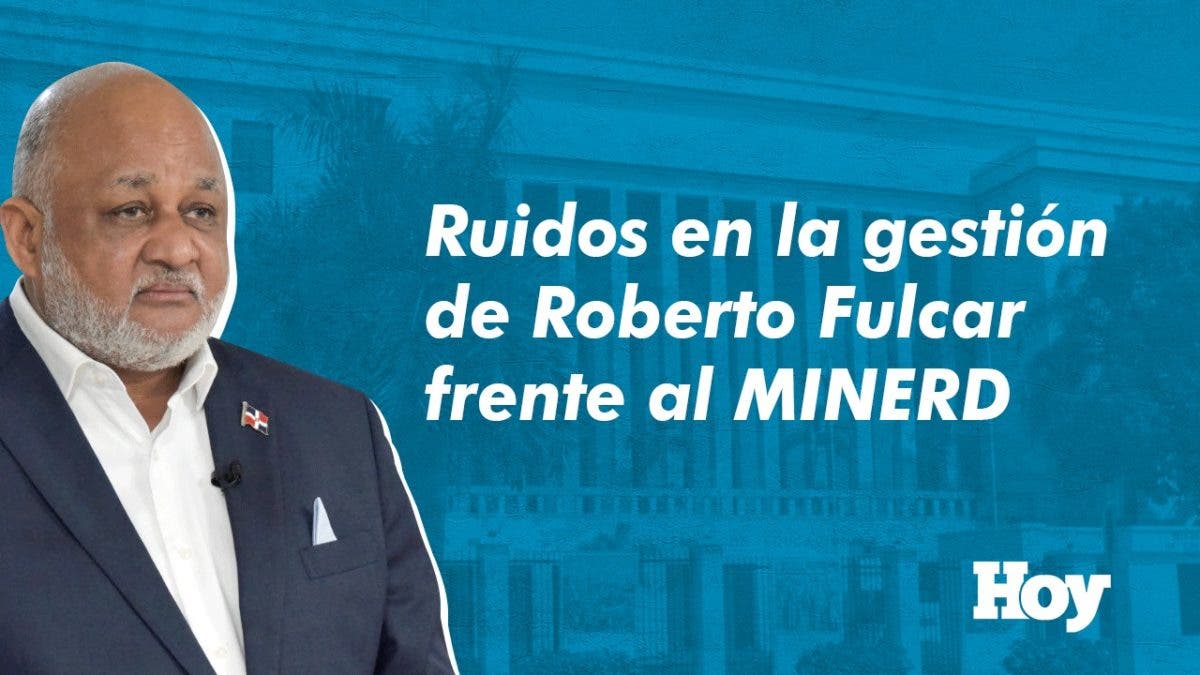 Roberto Fulcarit was until last night Minister of Education. Article 3 of the decree 414-22 appoints him as minister without portfolio and delivers the Ministry of Education (MINERD) a Angel Hernandez; who will be in charge of that institution from now on as established in the same regulations.

During his administration, Fulcar had to face several situations that placed him in the eye of public attention; and that caused the antipathy towards his management to grow in different sectors.

These are some of the cases that generated the most rejection towards the management of Roberto Fulcar at MINERD:

The orchids of the MINERD

Perhaps the first questioning of Fulcar’s management vis-à-vis the MINERD was the publication of a tender for RD$692,828.00 for the orchid acquisition (flower arrangements) to be placed in the headquarters offices. Fulcar would respond that this process came from the previous administration and the acquisition was cancelled.

Read more: Who is Hugo Beras, the new director of Intrant?

The action was harshly criticized for the high amount of the purchase added to the moment of the country’s health and economic crisis due to the pandemic.

During his administration, Fulcar had to face the virtual modality of the 2020-2021 school year. The official defended the process as successful despite criticism from parents, teachers and students for the deficiencies presented in practice. In addition to, the educational deficiencies with which the students ended up. These were compensated for in assessments such as national tests.

In January 2021, the MINERD opened a tender for the acquisition of 752 thousand technological equipment for distance school education and 188 thousand laptops for an amount of more than 10,200 million pesos. This process was criticized by the suppliers that were chosen to supply the devices.

The suppliers questioned were Madison Import SRL and Omega Tech, which, between them, were awarded sales contracts for almost 30,000 pieces of equipment for more than 621 million pesos.

Also read: Get to know the profile of Ángel Hernández, substitute for Roberto Fulcar as Minister of Education

Recently, the Directorate of Public Procurement and Contracting revealed that a month ago it suspended the acquisition of digital books by the MINERD with several publishers for the 2022-2023 school year. In this process, the media denounced that the Ministry of Education had paid 280 million pesos for the acquisition of equipment to companies that no longer exist today and that did not comply with the delivery.

In November 2021, the minister received the resignation of 16 of 20 organizations that were summoned to analyze, verify and make concrete proposals that contribute to quality, transparency and legitimize the process of the teaching competition for the following school year. This after the participants and aspiring teachers denounced irregularities in the methodology.

Hang out with teachers

During his management Fulcar was not exempt from conflicts with the Dominican Association of Teachers (ADP) with which he had an impasse over the fulfillment of various demands made by the union, among which were, precisely, the holding of a transparent teaching opposition.

The disagreement ended up being resolved, after many discussions, with the application of a salary increase of 10% to the teachers. This inconvenience, like that of the contest, threatened the development of the school year.

The communicator, Miguel Ortega, resigned from his position as director of Radio Educativa Dominicana, a dependency of the MINERD, according to him due to unseemly proposals that he denounced to then-minister Roberto Fulcar and that when he found out “he was disrespected” and physically assaulted him.

On this particular, the communicator said that he delivered the evidence to the corresponding agencies, but there was no response from any of the parties as to what really happened.