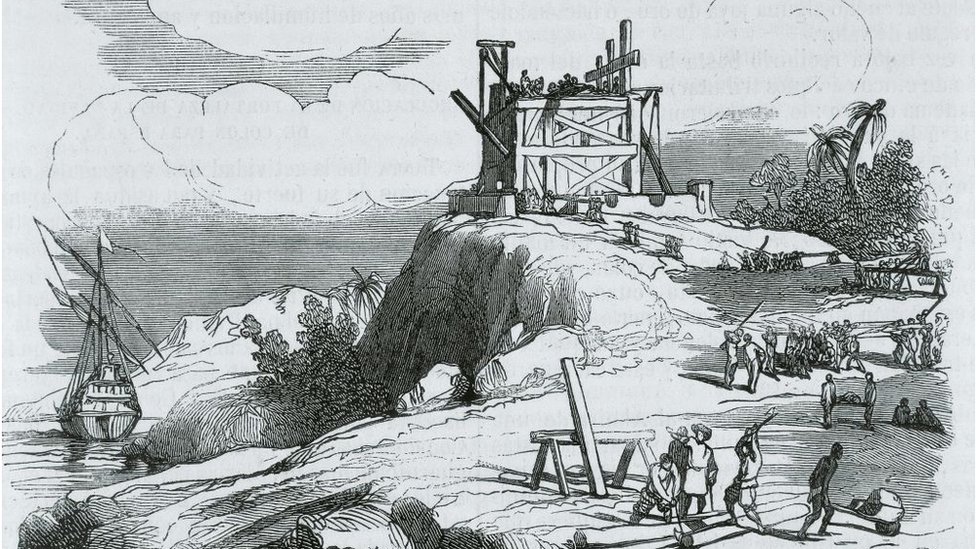 The mystery of La Navidad, the first European settlement in America built with the remains of one of Columbus’ ships

They all went to sleep and left the ship in charge of a cabin boy. What could go wrong?

It was Christmas Eve 1492. Christopher Columbus and his three ships had already reached the Caribbean, and had toured some of its islands. On board the Santa María, off the north coast of Hispaniola, the admiral soon went to rest, since at dawn the next day he had planned to meet with a local cacique, Guacanagarí.

No one heard the signs that the boat was approaching a sandbar until it was too late.

The Santa María ran aground without remedy and this unfortunate shipwreck gave rise to the first European settlement in America.

Archaeologists and scientists from all over the world have searched for decades for the remains of that fort that was built with the wood of the Santa María, and that did not last a year. Their bloody end, in which none of his men survived and some were even crucified, remains a mystery today.

But let’s go back to the moment when the ship – the Santa María was a ship, while the Pinta and the Niña were caravels – hit rock bottom off the coast of what is now Haiti.

That was a full moon night. The cabin boy’s screams woke up the crew, many of whom tried to flee in a boat to the Niña.

Columbus ordered the masts to be sawed off and everything that was possible to be removed from the ship to lighten it and try to unravel it.

But this was the highest tide of the year, so the admiral quickly knew that the ship would not be saved, since the water would not rise as high again. Columbus then sent his trusted man, the Navy bailiff Diego de Arana, in search of help to the town of Guacanagariwhich was about seven kilometers away.

Guacanagari was one of the five Taino caciques of Hispaniola that he sent, according to Columbus’ diaries, “many and very large canoes with many people to unload everything from the ship.”

Despite the fact that the logical thing, after the tremendous negligence, would have been that Christopher Columbus would have ordered the master and the sailor who abandoned the watch to be hung from a yard, according to the historian María Luisa Cazorla Poza in her doctoral thesis “La nao Santa María , the shipwreck that changed history”, colon torneither misfortune into opportunity: that of establishing a first settlement in what he still did not know was the New World.

The shipwreck also gave rise to the First alliance between Spaniards and Indians.

Two days before running aground, Columbus had sent a group of men to speak with Guacanagarí, who dominated the Merien cacicazgo, and they had brought him encouraging news.

In their encounters with the natives, the Europeans had seen gold ornaments and beadsand the admiral thought that, although the creation of a settlement was not included in the capitulations (the documents that the Catholic Monarchs agreed with Christopher Columbus for the distribution of the benefits that the expedition brought), establishing a fort could be useful for travel of the crown.

In addition, the men who arrived in three boats could not return in two: some were going to have to stay.

Columbus then decided to build a fortification that would house them until they could return the following year on a second trip. He would name this settlement Christmasin memory of the date of the accident.

For its construction, oak wood, nails and everything that could be used from the Santa María, already useless in its tomb on the reef, was used, as well as materials from the area.

This fort had, according to Columbus’ own journals, “a tower and fortresseverything, very good, and a great cava”.

In a few days, the sailors cleared the area and dug a ditch that would delimit the settlement, where they built a fortified tower and some cabins to house the men.

The Spaniards would be neighbors of the town of Guacanagarí, which Columbus mentions in his diaries as having some 2,000 inhabitants.

The Taínos would protect the Spaniards and these, in turn, would defend the indigenous people from their great rivals on the island, the inhabitants of the Cibao, an area in the interior of Hispaniola. These were cannibals and their leader was the fearsome Caonabo, husband of the famous princess Anacaona.

Columbus then left 39 men under the command of Diego de Arana, who would act as governor of the fort. Pedro Gutiérrez and Rodrigo Escobedo would remain as substitutes. His mission would be to search for gold and, according to the pact reached with Guacanagarí, protect his hosts from cannibals.

Many stayed of their own free will, motivated by the promise of obtaining riches and rewards that they could get from the Catholic Monarchs. Among them were the ship’s specialists, such as the carpenter, the blacksmith, the caulker or the physicist, as the medical doctors and barber-surgeons who went on board the ships were called then.

After being received with honors by the Kings of Castile and Aragon, the admiral was commissioned to make a second trip, this one to colonize those new territories of the Indies that he had discovered.

Christopher Columbus then took command of a fleet of 17 ships, 5 naos and 12 caravelswith some 1,500 people on board who crossed the Atlantic and arrived at Hispaniola after completing the entire arc of the Lesser Antilles.

The panorama they found there was bleak.

On November 25 Columbus sent a boat ashore to establish the first contact. The sailors found the corpses of two men, one younger than the other, with a rope tied around their necks and their arms outstretched on some cross-shaped beams, although they could not find out if they were part of the Santa María sailors who were They had a date for Christmas.

The next day they found others two more dead crucifiedand this time they no longer had any doubts: the corpses had beards, and the Taínos were beardless.

The cannon shots that were fired from the boats as a salute received no response from the fort. Something smelled bad.

Finally, on November 28, the first men arrived at the settlement and found a horror stamp. All the men were dead, most of them disfigured, and the fort had been set on fire, as recounted by Virginia Martín Jiménez in “The first Castilian settlement in America: the Christmas fort”.

There was no trace of gold and, what is worse, it was possible that they had gained a new enemy because the Taínos they met told them that the Spaniards had disobeyed the orders that the admiral had left them, and had shown disrespect to both their women and their property.

Who had killed the Spanish? Had they been from Guacanagari? Did they kill each other? Or was it the cannibals of Caonabo?

Columbus then met with Guacanagarí, who was convalescing, according to what he said, from an attack by the cannibals in which they had also killed the Spaniards. The admiral did not seem very convinced, and asked the doctor who accompanied him, Diego Álvarez Chanca, to examine his wounds.

The doctor thought that the cacique was pretending, and some of the sailors advised the admiral to avenge the deaths of the Spaniards.

Christopher Columbus, however, weighed the situation. He pretended to believe Guacanagarí, who asked him to attack his archenemy Caonabo, but believed deep down that the inhabitants of La Navidad died for their bad behavior and, possibly, killed by the Tainos to force an attack on the cannibals.

Years later, Fray Bartolomé de las Casas recounted with the testimony of some eyewitnesses that, after La Niña left, “they (the Spaniards) began to quarrel and have quarrels among themselves, and stab each other, and each take the women he wanted and the gold that there could be, and move away from each other”, according to what he told in “General History of the Indies”.

Some fled with the women, according to this story, towards the territory of Caonabo, where they met their deaths. The cannibal leader He then went to the fortress with many men, set fire to it, and killed those who remained.

Whether it was Caonabo, Guacanagarí or the Spaniards themselves, Columbus decided act with pragmatism and not avenge their deaths. Hispaniola was full of opportunities, and his goal was to found a more stable settlement.

On January 6 he founded “La Isabela”in honor of the Castilian queen, who became the first Spanish city in America.

Previous Cuba receives permission from the United States to bring MLB players to the World Classic
Next Christian Cueva falls apart at Christmas: Sadness overwhelms me but I love you | Peruvian team Pamela López | SPORTS