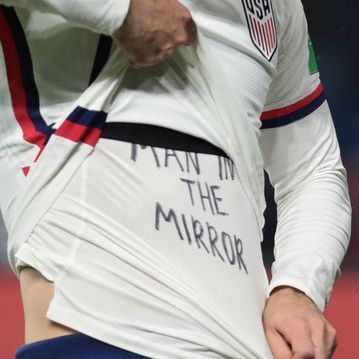 Christian pulisic he could not resist the urge to respond to Guillermo Ochoa, this after the Mexican goalkeeper assured that “Mexico is the mirror in which the United States wants to see itself”, So the so-called ‘Captain America’ sent him a message after the goal he scored and with which he opened the scoring in favor of USA.

🔥 After Guillermo Ochoa declared that Mexico is the mirror in which the United States wants to see itself reflected …….

🤫 Christian Pulisic celebrated by showing a t-shirt with the legend “The Man in the Mirror” https://t.co/l64FEC4ekY pic.twitter.com/5sZ58SFm5v

“The man in the mirror“Said the message from Pulisic in a shirt that he wore under his uniform. This as a clear response to the message of Ochoa.

After scoring with a head and opening the scoreboard, Pulisic He celebrated with his teammates and ran towards the broadcast cameras to show his message and make it clear that soccer USA it’s not how you perceived it Ochoa.

And it is that this Thursday, Ochoa said in an interview to TUDN that “Mexico It has been that mirror in which they want to see themselves and reflect, what they want to copy. On Mexico We have a strong league, they have grown and improved a lot, that helps the rivalry and competition ”.

The official Twitter account of the MLS was the one who emphasized the response of Pulisic, because he pointed to the words of Ochoa and highlighted the images of the American forward at TQL Stadium in Cincinnati, Ohio.

First, Pulisic opened the scoring and Weston McKennie made it 2-0 to be able to sentence a game that became a nightmare for him Tricolor, because in addition to moving to the second place in the Octagonal of the Concacaf, the famous “Two to zero”.