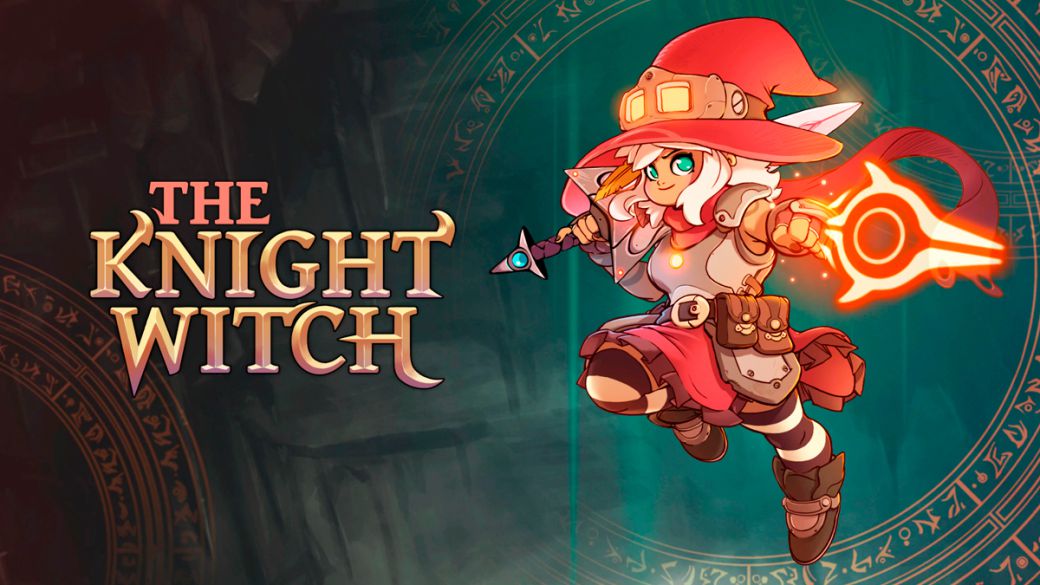 The Knight Witch, Switch analysis. The perfect alchemy of genres

Super Awesome Hyper Dimensional Mega Team, ahem, from now on Super Mega Team, with 13 years in operation behind them, present themselves with their best game to date, The Knight Witch. Weighty additions to the team such as the experienced Kevin Cerdá (exTequila Works), young talents such as Jorge Sánchez Fernández and the proven visual quality offered by original members of the stature of Enrique Corts and Mar Hernandez, have resulted in one of the games of the year. prettier to the eyes, but also more rewarding and challenging at the controls.

The secret is in the triforce of genres

The Knight Witch combines three playstyles in a fresh way: metroidvania 2D, shmup with Bullet Hell included and mallets of letters. The first structures the world, the second allows us to fly around it, and the third intervenes in combat in an interesting way. Of course, be careful those of you who don’t connect with the first two (the third, although important, is lighter), because you can be upset. Those of you who get lost in labyrinthine environments or those who get stuck when you see zillions of projectiles coming towards your position that occupy the entire screen, remain cautious.

It’s one of the risks involved in combining such different genres, which can attract a larger fan base… or alienate those who only feel comfortable in one of them. As a sign of identity, we can say that The Knight Witch shines bright in this risky alchemyso we encourage you to throw your head into his kettle.

We crumble the ingredients of the potion

Design metroidvania it requires scenario thinking at various levels. The general one, where everything is interconnected, and the particular one, which will include roads that we can access immediately and others that are closed until later. It is a global map that must be designed to the millimeter to prevent the user from getting stuck due to the wrong approach of a particular habituation. The Knight Witch responds with solvency to these parameters, displaying before us a huge branch of rooms, each more precious.

The shmup it changes the usual ship for our main character and allows us to fly around the stage. This obviously affects the Metroidvania design, which must be thought of vertically as well as horizontally since, from the first moment, the map can be deployed everywhere due to our free mobility. Of course, this ability to move is essential to successfully dodge the bullet hell with which the enemies receive us. Although a base is enabled autopointwhich is appreciated to focus on dodging while we do not release the automatic fire trigger, we can tune whenever we want with the second stick. The limited range of our projectiles will force us to get closer to the enemies, so, once we have acquired a certain ability to dashthe dance on the screen is guaranteed.

That ability that allows us to cross bullet barriers also affects the map design, since it allows us to cross certain barriers to access other areas. As we say, meticulousness is vital to design this type of game, where everything unfolds more and more as we acquire new elements to interact with the stage. And yes, we can confirm that the title of Super Mega Team manages to convey that pleasant feeling that the gradual increase in capabilities gives.

The only problem, and it can be big depending on the players, is the one we have found in certain difficulty peaks excessive. In limited phases where the possibility of increasing our abilities by conversing with other characters (we’ll get to that) is very limited, and we can only shield ourselves by buying one or two more hearts, running into an enemy whose cost is to take just half of his life , before being shot down again and again, can become frustrating. It’s something that has reminded us of the times of Rise & Shine, the previous Super Mega Team game, and that’s not good (most of all, because even then they had to adjust the difficulty of certain moments after the fact). At that point, those who got here just for the Metroivania will be pulling their hair out while those who got here for the Bullet Hell will clap their ears (because their hands will be glued to the controller making the joysticks sweat).

Fighting can be eased with decks of cards (although they are not a safe-conduct for the aforementioned bullet hell). We unlock the cards little by little and activate them in combat with the Y, X and A buttons. Little by little we will have more than we can use directly, so it will be common to play on the menu with different combinations to use in battle. In this sense, it is good that in the save points the ability to visit a combat arena where to practice with different decks.

This very interesting combination of elements would be worth by itself as soon as we see that it works at the controls, but there is more. The narrative of the game, although light and fun in appearance so as not to be too distracting, serves to unite everything and give us a goal that drives us to continue. Best of all, even here the studio decides to differentiate itself from the usual in the market.

The protagonist from The Knight Witch, married, well over 30 years old (although her way of expressing herself corresponds, at times, more to a teenager) and with a normative body (nothing like a muscled and sexy advert type) we have fallen in love. His start at the bottom of the ranks of the Knight Witch, an elite body that is the last line of defense of the decimated society that we must defend, also contrasts with the established norms of the Metoridvania.

If we go back to the canonical, in this genre we have a powerful character who shows off all his power and abilities in the prologue of the game. After an early confrontation with a big boss, these abilities are lost, which we will have to collect again little by little while we discover the map. The addition of a new gadget will allow us to open up the map a little more, where we will find a new element to add to our arsenal which in turn will allow us to advance a little more (in unknown terrain but also opening new routes in the known one).

In The Knight Witch, the prologue with the checked avatar falls on one of the most important characters in the plot, none other than the head of the witches. Thus, she represents with her power everything we can aspire to once we take control of our real protagonist, a private in a matter of skills.

The game message it flees from Manichaeism, which is to be appreciated, and makes us question the intentions of one another, including our bosses. The power of witches grows with the trust that the people put into them, which is why it is extremely interesting that, at a press conference about our last semi-failed skirmish, we are rewarded much more for lying to the respectable than for telling the truth. The first will increase the confidence in our character, which will translate into greater power, the second, although more honest, will make it difficult for us to progress. Since we are not judged, the player really expresses himself as he would in reality, putting in check the morale that we often demand of other people in the real world.

With a beautiful artistic section like few of us have seen this year, The Knight Witch presents us with a fresh and brave proposal that successfully mixes three very different genres: Metroidvania, Shmup and Mazos, which it wraps in a very interesting narrative that hides, in its simplicity and pleasant humor, a tricky moral treatise applicable to our own reality. Although it is by no means the best game in the world in any of the sections it touches on, it does manage to make a difference in its balanced combination of all of them. It turns out a title that feels familiar but at the same time different, and we are sure that the player will enjoy a lot… at least until they come across certain difficulty peaks that scream for a balancing via patch. Overall The Knight Witch is a remarkable and highly recommended game, a creative pinnacle for Super Mega Team that is worthy of congratulations while also setting the studio the difficult task of surpassing in what is to come.

It meets the expectations of what a good game is, it has quality and does not present serious flaws, although it lacks elements that could have taken it to higher levels.