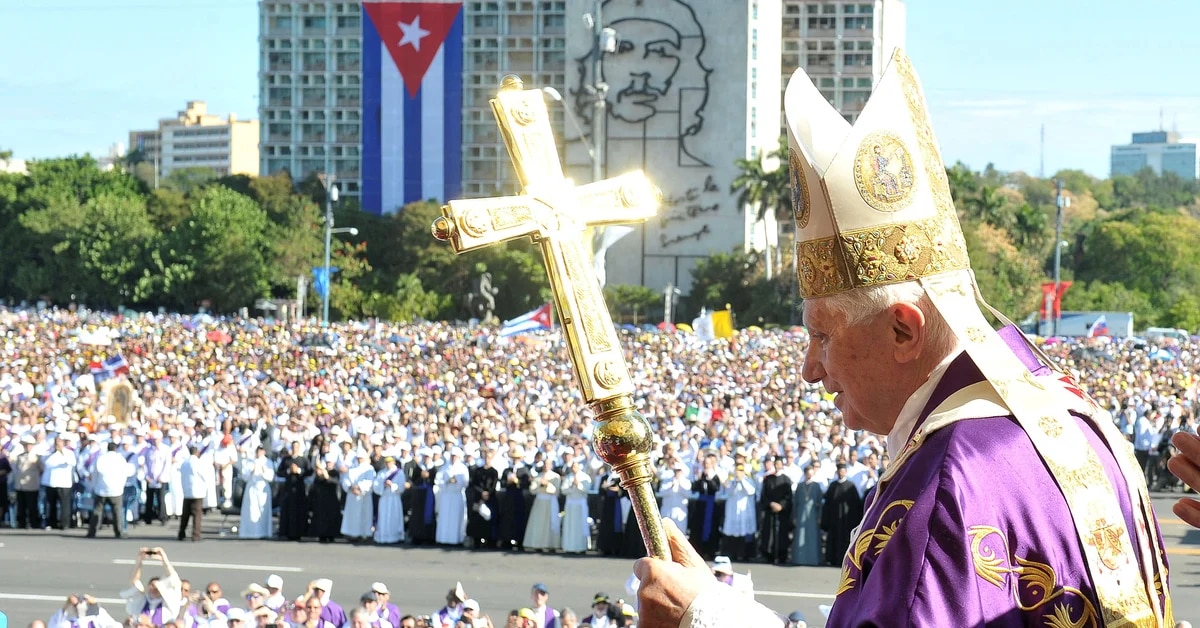 The footprints of Benedict XVI in Latin America

Pope Benedict XVI during his visit to Mexico

The emeritus pope Benedict XVIwho died this Saturday at the age of 95, made 24 apostolic trips outside of Italy, two of them to Latin Americaalthough he demonstrated his predilection for “the Christian roots of Europe”, such as his three visits to Spain, and very far from the “peripheries” that Francis prefers.

Benedict XVI happened in the papacy to Saint John Paul II on April 19, 2005 and remained at the head of the teaching profession of the Catholic Church until February 28, 2013 when his resignation from the pontificate was made official.

During his pontificate he wanted to visit on two occasions Latin Americaa lower figure compared to that of its predecessor san John Paul IIwhich made 26 trips.

Benedict XVI first went to Brazil from May 9 to 14, 2007 to inaugurate the V General Conference of the Latin American and Caribbean Bishops (CELAM) in the sanctuary of Aparecida, the patron saint of the country, and there he drew the lines for a new Evangelization of Latin America.

Five years later he went to Mexico and Cubafrom March 23 to 29, 2012, two countries in which he defended religious freedom and a future of peace and fraternity for their populations.

Benedict XVI in the Plaza de la Revolución in Cuba

It was precisely after this trip that Pope Benedict XVI made the decision to resign less than a year later, as explained in 2013 by the then director of the Vatican newspaper “L’Osservatore Romano”, Gian María Vían.

A Spain He traveled three times in his eight years of pontificate, a remarkable figure considering that John Paul II made five trips to Spain in his 26-year pontificate, the third longest in the history of the Catholic Church.

The first time that Benedict XVI traveled to Spain was on July 8 and 9, 2006 to Valencia to preside over the V World Meeting of Familiessummoned by his predecessor before his death.

There, the German Pope defended the indissoluble marriage between man and woman, the family as the fundamental pillar of society and sanctuary of life, and the responsibility of parents as the first educators and trainers in the faith.

He returned to Spain again on November 6 and 7, 2010 and on that occasion he did so as a pilgrim of faith with an apostolic journey that had two stages, the first was Santiago de Compostela, on the occasion of the Compostela Holy Year, and the second Barcelona, ​​where he consecrated the temple of the Sagrada Familia.

Less than a year later, from August 18 to 21, 2011, he moved to Madrid where he presided over a massive XXVI World Youth Day (WYD) that was attended by young people from many parts of the world, especially Latin America.

Up to two million pilgrims, according to the organizers and the Vaticanparticipated in those acts that became the largest Catholic concentration ever held in Spain.

Benedict XVI visited the five continents in less than a decade, although his apostolic trips were mainly to Europe.

His last trip as pontiff outside of Italy was to Lebanon, in September 2012.

Benedict XVI, the theologian pope who revolutionized Vatican tradition with his resignation, has died
Three coffins and the extraction of their entrails: the funeral rite of the popes until the burial
From Germany to the Holy See, the life of Joseph Ratzinger, in photos

Previous Three must-see comedies to remember Brittany Murphy
Next How much will the bitcoin price start in 2023?