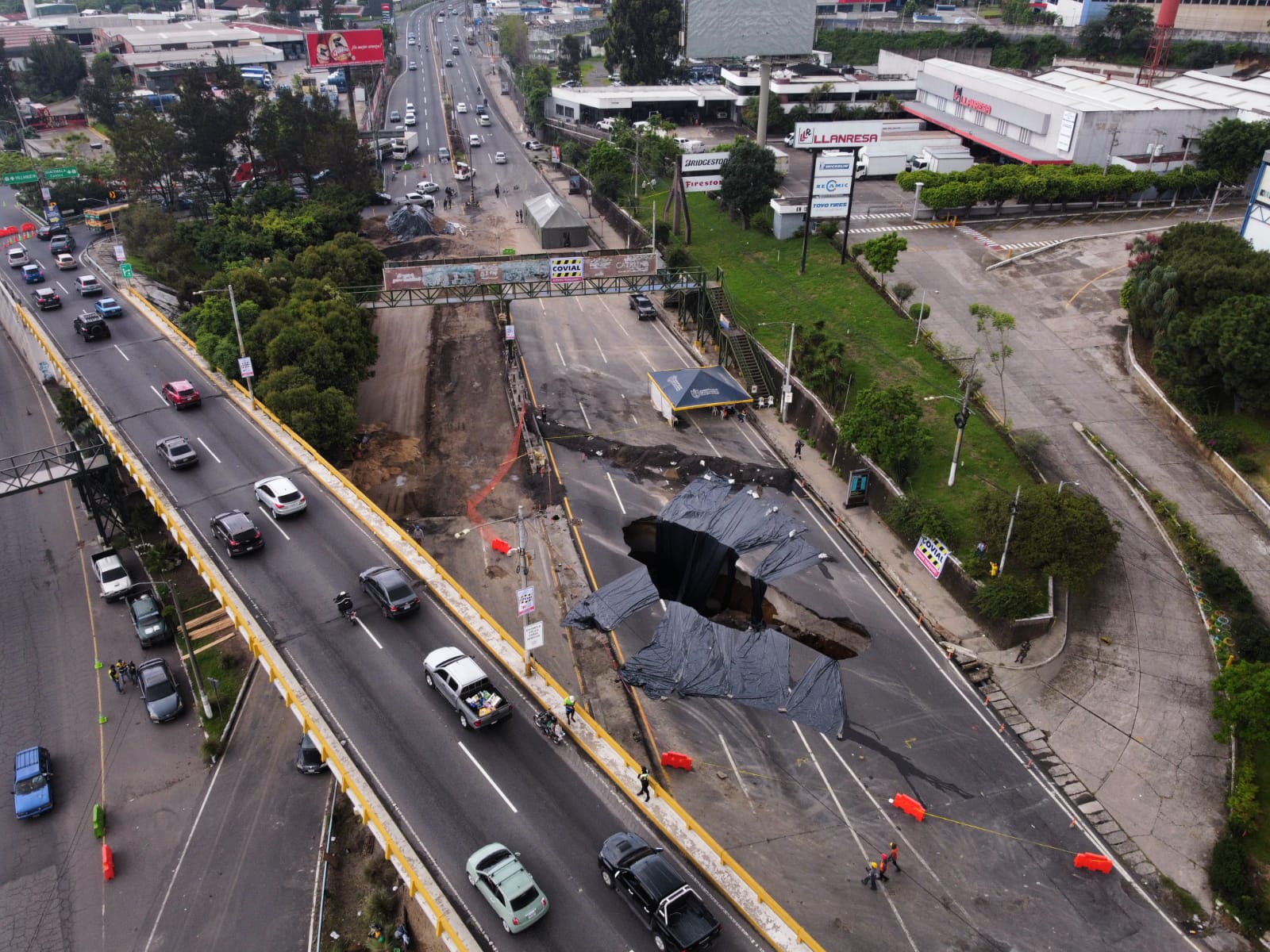 Delays in cargo logistics, extension of time for transportation and increase in costs are three impacts that the producing, importing and exporting sectors experience due to the collapse of a section of the highway at kilometer 15 of the Ruta al Pacífico, apart from several landslides

After the authorities prohibited the passage of heavy transport through the Enrique Tejada Wyld overpass located near the sinking, the alternate route for heavy cargo transport is Calzada Roosevelt towards the Inter-American Highway (CA-1 West) up to kilometer 51 to return to the road distributor and join National Route 14 (RN-14). From there, exit at kilometer 103 of the RN-14 to take Route CA-9 South at kilometer 56, according to what the Villa Nueva municipality reported on Saturday.

However, apart from lengthening the distance and transit time, one of the sections of that alternate route, on kilometer 24 of the Inter-American Route in the jurisdiction of Mixco, registered a large-scale landslide this Sunday that blocked the lanes on both roads. to and from the West.

Héctor Fajardo, general director of the Chamber of Central American Carriers (Catransca), estimates that the freight transport that regularly uses the Calzada Raúl Aguilar Batres and the route to the Pacific at kilometer 15.1, will take between 60% more or up to double the time it normally takes to reach their destinations.

He mentions as an example that from Guatemala City to Escuintla, the journey takes about two and a half hours, so now it could take up to 4 or 5 hours. This implies cost increases, since each hour of delay represents an increase of Q35 per truck or trailer.

Jean Paul Brichaux, president of the Council of International Transport Users of Guatemala (Cutrigua) added that from the capital and surrounding areas, to Puerto Quetzal, they would be adding about three or four hours in transit because the alternate routes can also be saturated.

But the implications may be greater and companies will have to adjust logistics, production or dispatch times so that their cargo is on time to be shipped or they would face other problems, such as losing the ship and, in the current situation of the global logistics chain, wait for space on another ship, he added.

During the night and early morning, the rains caused the fluid cement to wash away and that caused a problem on the road. pic.twitter.com/IdbQRSCh0Z

The problem is not only time and fuel, but also the number of containers and heads that will be needed to come and go, in order to meet the demand for freight transport.

It may interest you: IMAGES: Sinking in Villa Nueva extends for several meters and this is how Sunday dawns

Fanny D. Estrada, director of institutional relations of the Guatemalan Association of Exporters (Agexport) agrees with the difficulties mentioned, to which is added the collapse of bridges. The directive commented on the strategic importance of the route to the Pacific and the logistical impact of the sinking at kilometer 15:

“Although not all the cargo leaves the capital or goes through that place, high volumes do move south, to Puerto Quetzal and specialized terminals. Also to or from Mexico and Central America.”

In total, Puerto Quetzal registers daily maritime movements of 894 import and export containers; 55% of exports destined for the west coast of the United States; 25% of imports from Asia. And the land movement is estimated at 338 daily vans from Mexico.

Also read: More than 80 incidents and more than 113 thousand people affected by the rains this week

Around Q284 million daily, on average, is what moves the Quetzal Port and specialized terminals in the Pacific, said Brichaux. This includes imports of coal, corn, iron 10%, fertilizers, cement, wheat, containerized cargo, soy flour, fuels, gas and others.

“This route (to the Pacific) is one of the most important arteries in the country and supply for the city and vice versa; it is also essential for exports, so it is essential that it be expedited”, mentioned the president of Cutrigua, and commented that by having to use alternate routes for light and heavy transport, generalized chaos is generated and that complicates the supply of consumer products. for the country.

On the other hand, according to Fajardo, most of Guatemala’s routes have limitations for the use of heavy transport. For example, with the current problem to the south, it is not possible to use routes such as Villa Canales, Boca del Monte or the center of Villa Nueva, due to the topography, the width of the streets, the curves or that they have not been designed for support the weight of those vehicles.

And he agrees with Brichaux that National Route 14 has certain levels of slope and presents serious difficulties. “The problem changes every moment, since the alternate route of the Inter-American Highway has also registered landslides, which further complicates the transfer, risk and wear of the units,” added the Cutrigua manager.

According to what the authorities are now explaining, the solution will be long-term, so some palliative or route options will be necessary, said Brichaux. Meanwhile, Fajardo believes that it is necessary for the government not only to summon politicians or officials to technical roundtables, but also sectors that are familiar with the issue, such as carriers.

It may interest you: INTERACTIVE | Broken connectivity: The state of the roads that are losing money

#TrafficGT He continues to be detained at km 24 of the Inter-American highway while cleaning work is carried out due to a large-scale landslide.