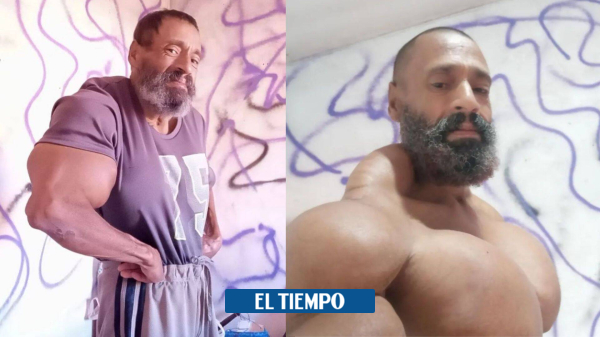 The Brazilian bodybuilder Valdir Segato, whose photos of his impressive physique became popular on social media, has died in recent days. He had just turned 55 years old.

The man was known as the Brazilian ‘Hulk’ or ‘Popeye’, as he had the muscles on his arms, deformed back and chest. To achieve that great size, he used a substance that the specialists had already warned him about.

According to relatives reported to local media, the man felt unwell during his birthday last week. That day, he went to the emergency services of a health center, where he died.

A few years ago, Segato became popular for his physique. Having huge biceps and pecs he became known as ‘Hulk’ or ‘Popeye’. This was achieved by using a substance known as Synthol.

(See: Photos: They achieve surgery to separate Siamese twins joined at the head)

“Synthol, or also called Syntherol, is a mixture of oil (85%, medium chain triglycerides, or MCTs), lidocaine (7.5%, local anesthetic), and benzyl alcohol (7.5%) that is injected directly into the the muscle,” Dr. César Kálazich, specialist in sports medicine at the MEDS Clinic, in Chile, told BBC Mundo in 2018.

The doctor explained that this substance acts as an implant that causes an immediate volume increase in the muscle. However, its use involves several health risks.

(Also: They rescue a woman kidnapped for 17 years: place was dirty and said ‘Jesus loves you’)

As he told the BBC, the Brazilian began to inject a substance similar to Synthol because, despite following a training routine in the gym, he could not make his muscles grow.

“There were many and I was very skinny,” he told the media outlet in 2018. He added, “When I saw the other people who were so strong, I wanted to be like them.”

Although she said she felt a little scared, she began to enjoy the attention her body received. On medical recommendation, Segato had to stop using the substance. However, he later continued to use it.

They had already warned him, moreover, that if he continued to inject the substance into his body, he ran the risk that they would have to amputate a limb.

In 2019, the British tabloid ‘Daily Mail’ also did an article about Segato’s case. At that time, the Brazilian commented that he was inspired by the physique of actor Arnold Schwarzenegger and the character of ‘Hulk’.

(You may be interested in: ‘Harry Potter’ actress accuses Schwarzenegger of releasing gas in his face)

Years before, the man commented that he was very thin when he was young. Furthermore, he said that he had a drug addiction problem that caused him to lose even more weight. For that reason he joined a gym; there they offered him Synthol.

What are the risks?

The doctor consulted by ‘BBC Mundo’ listed a series of problems that can arise from the improper use of substances with a composition similar to Synthol, among which cases of chronic pain stand out -documented in scientific literature.

Added to this is the appearance of “muscle fibrosis (degeneration of the muscle that causes replacement of muscle tissue by scar tissue) or the formation of an oleoma, which is the tumoral encapsulation of the oil with deformity of the muscle and potential irreversible damage to it”.

By using the substance it can also happen that infections and abscesses arise in the areas where the injection is made. This can lead to surgeries or even amputation Of the members.

(See: Lina Tejeiro advised those who think about her life: “Better go to the gym”)

Finally, the doctor added that a scenario in which “although it has not been described with Synthol, there is a risk of fat embolism in the lungs or brain (transport of a large amount of oil through a venous or arterial blood vessel , respectively), which can lead to severe pulmonary or cerebral compromise, even death”.

The expert’s recommendation is to increase muscles naturally –through exercise – and not using substances that can cause health risks.

(Keep reading: Zlatan Ibrahimovic: the amazing physique of the footballer at 40 years old)

Valdir Segato was originally from Ribeirao Preto, in São Paulo. He worked as a builder.

The difficult life of a woman who said “the victim” and became a meme: what happened to her?