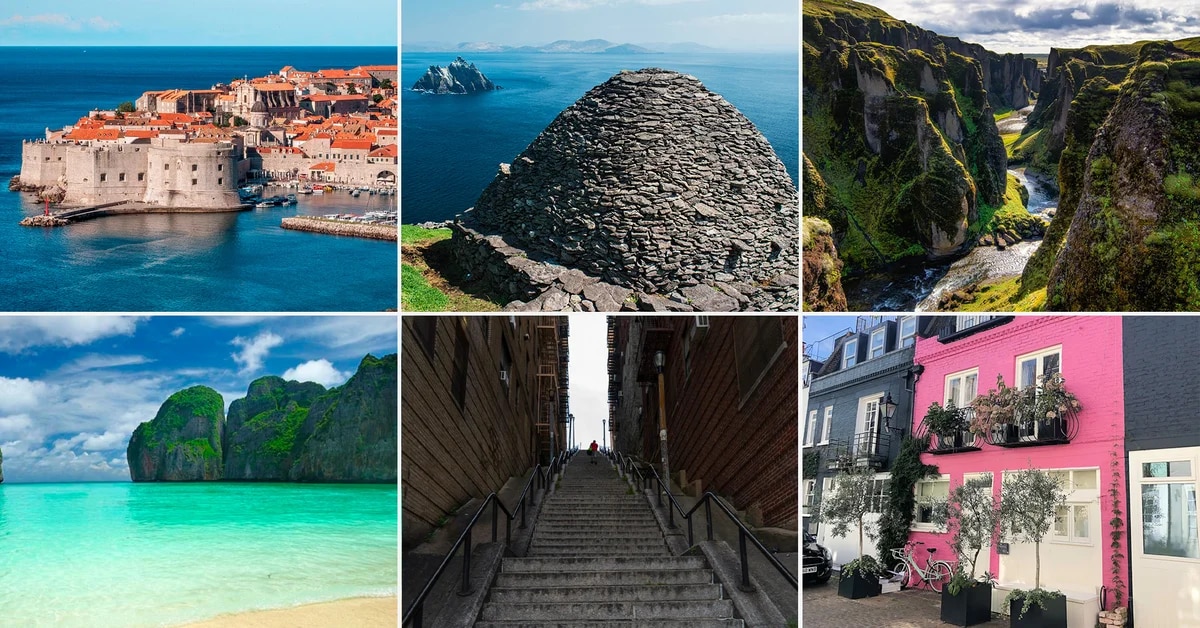 Different scenarios of some famous broadcasts such as Breaking Bad, Game of Thrones, Star Wars, among others, receive hordes of tourists and fans every day who begin to alter the normal life of those places.

Cinema and television are two of the artistic expressions that generate the most fanaticism, something that today is enhanced by the platforms of streaming that allow people from all over the world to see the same content simultaneously. This is how fan communities arise and “explode”.

At the start of the World Cup, an airline returns that had left Argentina due to the pandemic

Looking ahead to the summer and to Qatar, a major international airline resumes its operations in the Argentine market

But the fanaticism that some movies and series generate takes on such a magnitude that they begin to influence and affect other aspects, as is the case of certain places or Destinations tourist attractions that after appearing on the screens became places of worship and points that are constantly visited.

In this framework, below is a list with 10 Places That Locals Say Were “Ruined” By Visitors after gaining notoriety for appearing in a movie or series, as compiled by Business Insider.

Cyber ​​Monday 2022: the best travel deals and how to find the cheapest flights

Until November 2, users will be able to find everything from financing in installments to special discounts in national and international destinations, among other opportunities to get on a plane and enjoy

The well-known television series not only took place in Albuquerque, but the film set was right there. The House of Walter White and his family exists, and there are people who currently live there.

Cyber ​​Monday 2022: the 4 best deals to travel to Miami and save dollars

Although the city of Albuquerque benefited greatly from the publicity that the series gave it, the house in question is not included in the list of sites related to the series, precisely because it is a private home.

In fact, the owners had to install a 1.8-meter fence to discourage visitors, since, as the owner’s daughter told KOB4 News in 2017, curious people came daily to take photos and touch the house; She even said that sometimes they threw stones at the windows or pizzas at the ceiling, recreating one of the most iconic scenes of Breaking Bad.

The stairs of “Joker”, in the neighborhood of the Bronx, New York

“Joker” is one of the most acclaimed films of recent years, both for its script and for the incredible performance it gave joaquin phoenixreaching the point of slimming down to the bone and transforming his body for the role.

One of the scenes most remembered by viewers is undoubtedly when the Joker dances down some long stairs, in fact, memes were made about it that circulated far and wide on the Internet, filling the houses of those who had seen the movie with laughter. and those who don’t.

The stairs have become so well known that the number of visitors who go to see them has altered the lives of Bronx residents who have used them for years to go to work, school, or simply to return home.

Maya Bay, the beach of “The Beach”, in Thailand

The movie “The Beach” was one of the many for which Leonardo Dicaprio viewers fell in love, both for his performance and for being one of the most acclaimed leading men in Hollywood.

The film was made in 2000 in Maya Bay, a cove on the Thai island Phi Phi Leh. Since then, an incredible number of tourists and onlookers have come to this beach every day, characterized by its crystal clear waters and stone cliffs; In fact, as detailed by the BBC, there were times when 5,000 people arrived at the site daily, until in 2018 the Department of National Parks of Thailand had to temporarily close the beach due to the deterioration that had reached the place.

The abode of “Full House”, in San Francisco

Although “Full House” was a series from the 90s, in 2016 Netflix revived it, rekindling the flame of fans.

The fiction takes place in San Francisco and was filmed in a house on Broderick Street, the local municipality had to prohibit the passage of tourist groups, but could not prevent the pedestrian traffic of tourists and onlookers.

Natcher and Carla Hashagen, residents of Broderick Street, told Curbed in 2018 that they took time-lapse footage of the venue and observed large crowds of fans frequenting the area.

“We have counted between 1,000 and 1,500 visitors per day. They come on buses, Ubers and Lyfts, Go Cars, bicycles, motorcycles,” they said.

The fanaticism for the Harry Potter movies is such that fans came to create a memorial for the elf of the Dobby saga.

In “Harry Potter and the Deathly Hallows – Part 1” Dobby dies in Harry Potter’s arms on a beach, the scene was filmed at Freshwater West Beach in Pembrokeshire, Wales. There the fans began to leave stockings referring to the fact that with this object it is possible to free these fantastic beings from her master, according to the imaginary universe of the saga.

But so many stockings were left behind that they began to raise environmental concerns for the tourist attraction, the New York Times reported.

Conservation charity National Trust Wales conducted an eight-month review of the site and noted that “items such as stockings, trinkets and paint chips from painted pebbles could enter the marine environment and food chain and put wildlife at risk”.

The monument will remain, but the organization is now urging visitors to take photos instead of leaving stockings behind.

The murder house of “American Horror Story”, in Los Angeles

The first season of “American Horror Story” took place in a creepy-looking house that actually exists and is known as the Rosenheim Mansion, where other television shows such as “Buffy the Vampire Slayer”, “Bones” and “Law & Order” were filmed. ”, as detailed by Atlas Obscura.

For all this, but mainly because of the horror series, the site became a place that tourists passing through Los Angeles visit every day. Ernst Von Schwarz and Angela Oakenfold, the home’s owners, said they were horrified when hordes of fans began to pack their property shortly after they moved in.

The couple told CBS News they didn’t know how famous the property was before they bought it and had to repeatedly call the police because of minor thefts.

Such is their concern that they decided to sue the former owner and his real estate agent for unspecified damages to build a permanent fence or hedge around the mansion.

Dubrovnik, a city in Croatia where “Game of Thrones” was set

In the month of August, the city of Dubrovnik registered more than a million visitors after it appeared as the setting for one of the most famous series of recent years, Game of Thrones.

The city has proposed banning the opening of new restaurants in a bid to stem the flow of tourists flocking to this picturesque seaside spot.

The Pink House from “Love, Actually” in Notting Hill, London

This site became very popular among lovers of romantic movies who visit London, located in the picturesque neighborhood of Notting Hill, the pink house served as the backdrop for the iconic scene of “Love, actually”, where Mark (Andrew Lincoln ) declares his love to Juliet (Keira Knightley) with reference cards.

“I had no idea this house was in the movie when I bought it before the Instagram craze and now I live under a blanket of selfies, tour guides and a line of tourists lining up to take photos on weekends,” he said. homeowner to the Daily Mail.

However, he had a good idea to take advantage of the celebrity of his house, he placed a donation box outside the building and is giving the proceeds to local charities dedicated to helping the homeless.

The Fjadrárgljúfur canyon, from Iceland that appeared in “Game of Thrones”. (Viktor Laks)

The Canon Fjadrárgljúfur appeared in a video clip of Justin Bieberbut mainly it owes its fame to the fact that iconic scenes from “Game of Thrones” were filmed there.

It was there where Jon Snow (Kit Harington) flew his first dragon and where he fought the Night King’s army in the episode “Beyond the Wall.”

As reported by the Associated Press, the influx of visitors has damaged the delicate landscape of the area, due to the fact that park rangers and signs were placed signaling how visitors should behave so as not to affect the natural environment.

The Sceilg Mhichíl Island, in Ireland, which served for the final scene of “Star Wars: The Force Awakens”

Despite being declared a UNESCO World Heritage Site and having already received visitors before the premiere of “The Force Awakens”, the sci-fi blockbuster helped fuel an increase.

But overtourism could be putting the area’s delicate early medieval monastic remains and its famous bird habitats at risk.

The site would need to reduce its number of tourists by a third to maintain the “sustainable” level recommended by UNESCO, as detailed by The Irish Independent.

Nearly 17,000 people reportedly frequented Skellig Michael in 2018, a figure that far exceeded the 11,000 visitor limit proposed by the World Heritage organization, and Ireland’s Office of Public Works is working on a plan designed to adjust improve tourism to the recommended sustainable level without drastically affecting the economy of the area.

How is the USD 1.75 million motorhome with garage, kitchen, full bathroom and double bedroom
Small but powerful: the five most expensive and luxurious two-bedroom apartments for sale
Apple, unstoppable: its market value is greater than that of Google, Amazon, Facebook and Netflix combined

Previous Anne Hathaway’s jeans ideal to highlight the waist
Next What is purpura with thrombocytopenia? Julia Roberts’ illness

The gallant of “What’s up with Secretary Kim? Y “Fight for my way” will debut …