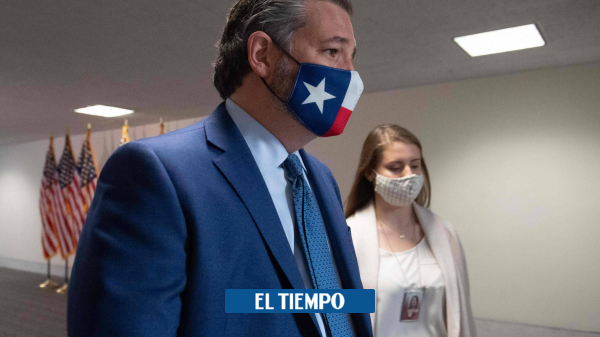 republican senator Ted Cruz He spoke this Thursday in the Plenary of the US Senate of a new bill that would involve Colombia and the bilateral relationship it has with that country.

This, which would have the name ‘Caution law’, seeks to carry out surveillance of the resources that are delivered to Colombia, especially in the areas of security, defense and the fight against drug trafficking.

The project “will condition all our aid based on the path that Petro chooses to follow,” assured the senator, who also pointed out that, in the event that the new government decides to cut off defense coordination with the US, there will be “no more money for security in Colombia”.

According to Cruz, this is a preventive measure, since “any socialist leader who chooses the path of Marxism must be held accountable” by the United States. In addition, he maintained that he is “concerned” about the measures that Petro may take as of August 7, because Colombia could be part “of the anti-American forces of Latin America”.

Project on the FARC

Any socialist leader who chooses the path of Marxism must be held accountable.

Last week, Cruz, hand in hand with Congressman Marco Rubio, presented another project that concerns Colombia, specifically the FARC. The senators ask that it be reinserted on the list of US terrorist organizations, since this group “continues to be a threat to the security of Colombia.”

Likewise, the project proposes sanctions for terrorism against seven people associated with the FARC. Among them the Former Senator Piedad Córdoba and Congresswoman Sandra Ramírez Lobowidow of the former leader of the Farc, Manuel Marulanda Vélez.

“The ‘petrista’ senator Piedad Córdoba alias ‘Teodora’, who played a decisive role as a negotiator during the time of the peace accords and recently led a scandal when she was detained at an airport in Honduras carrying almost 50,000 dollars in cash; and in second term Sandra Ramírez Lobo alias ‘Griselda Lobo’, who is the widow of the deceased Commander of the Farc Manuel Marulanda alias ‘Tirofijo’”, said Cruz during a Senate session.

According to the senators, this is a response to President Joe Biden’s decision in November of last year to remove the FARC from the list of terrorist organizations after making an evaluation that lasted several years. According to the administration, the group as such no longer exists and its members demobilized as part of the peace process.

Biden, however, included in this list of terrorism the FARC dissidents that did not demobilize, among them the group Second Marquetalia led by Iván Márquez.

“For decades the people of Colombia have been innocent victims of the FARC’s terrorist attacks. Biden’s decision to remove them from the list of terrorist organizations not only failed the Colombian-American community but also put regional security at risk,” Rubio said for his part.

Although the US Congress has the authority to make such a decision, generally it is an attribution that corresponds to the administration on duty, which is the one that advances the process to include or exclude a group or people from this type of blacklist.

Therefore, and given the current division that exists in the legislature, it is very unlikely that either of Senator Cruz’s two proposals, if he finally decides to present the ‘Caution law’, will advance in Congress.

And not only that. The Biden administration’s position on its relations with Colombia continues to focus on keeping the country as an important economic ally in the region and either of the two Republican bills could affect that status.

– Food crisis: another three ships with cereals will sail from Ukraine

– Lebanon: they demand an investigation two years after the explosion in Beirut