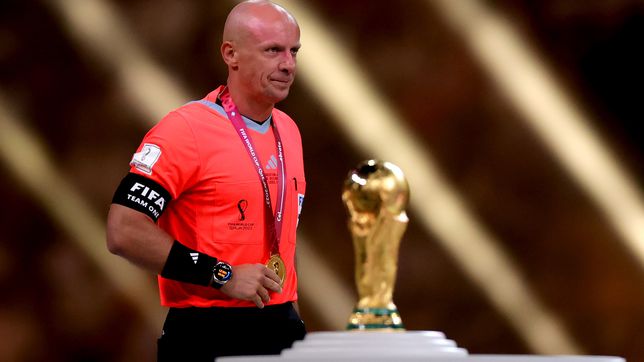 Szymon Marciniak, referee of the World Cup final in Qatar, defends himself against criticism from France

One of the great protagonists of the Qatar 2022 World Cup final, the same in which Argentina was crowned world champion after beating France on penalties, was the Polish referee Szymon Marciniak, who had some controversial arbitration decisions that caused discomfort mainly with the ‘Gauls’.

According to L’Equipethe third goal of the Argentine team, the same as Lionel Messi in overtimeshould not have gone up on the scoreboard because there was an invasion of footballers from the ‘Albiceleste’ team at the time the play that ended up defining the ‘Flea’ was taking place.

Given that claim, The referee broke the silence during a press conference that he gave precisely in his country and where he defended himself against the criticism received by the world runner-up, recalling a similar play that occurred in one of France’s goals.

“The French did not mention this photo where you can see how there are seven Frenchmen on the field when Mbappé scores a goal. Nothing to say, especially since Kolo Muani’s missed opportunity at the end of the match, several substitutes were still in the playing area” said the Pole.

YOU MAY ALSO LIKE: FIFA to take action against Salt Bae for touching the world cup

“The French did not mention this photo where you can see how there are 7 of them on the field when Mbappé scores a goal.”

🗣️ Szymon Marciniak, the referee of the World Cup final, and his response to L’Equipe for the criticism that there was about Messi’s 3-2 in overtime. 🇵🇱😡 pic.twitter.com/yo7Bc399JQ

Finally, he explained both plays and the reason why decided to validate both goals despite the fact that the FIFA regulations indicates that due to the invasion of substitute footballers it could have been invalidated and therefore not put on the scoreboard.

“If refereeing consisted of knowing the rules of the game by heart and applying them literally, there would be millions of excellent referees. For example, there is a rule that play cannot continue without a corner flag; Let’s imagine it’s broken and there’s no replacement, shall we cancel the World Cup final?” he sentenced.

Despite the fact that the referees were booed during the award ceremony, Marciniak assured that several footballers from the French team approached him to congratulate himand pointed out that the great figure of the duel, Kylian Mbappé, pointed out that they were great referees.

Previous The mobile applications with the highest internet traffic in the world
Next What to watch on Netflix: the 10 most watched movies in the last week in the United States, recommendations and upcoming releases | Chronicle