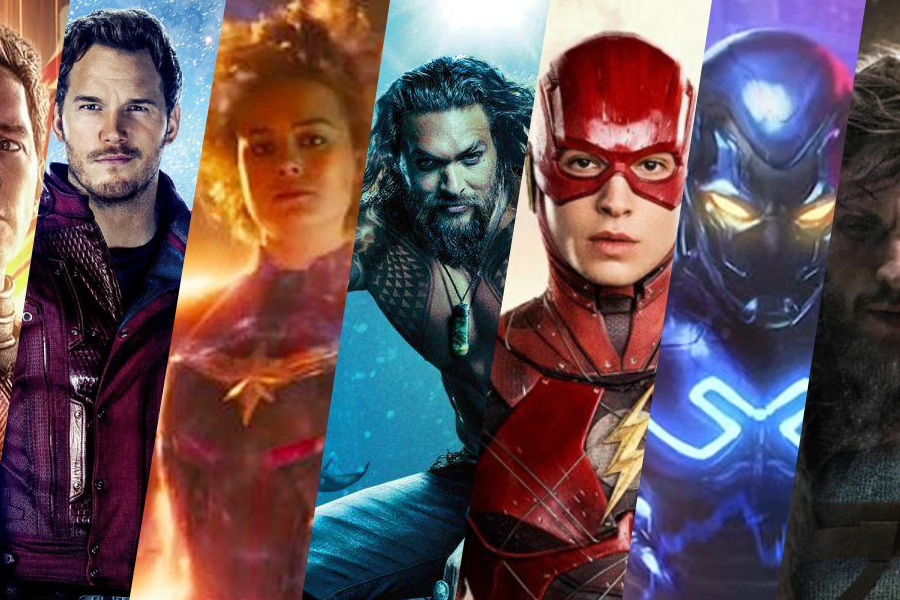 Superheroes return to the cinema in 2023

Some films mark the return of various superheroes to the big screen, while others make their debut for the first time.

In the capitalwe already showed you a list of the great premieres that will be in the cinema, but we decided to omit the superhero cinema, so, on this occasion, you will find these films that will make you move to the bone.

ANT-MAN AND THE WASP: QUANTUMANIA

Scott Lang is back, after the events of Avengers: End Game, the world sees him as a savior. Now, he must face a mysterious villain who threatens to conquer the quantum realm. It features the performances of Paul Rudd, Evangeline Lilly, Michael Douglas, Michelle Pfeiffer and Jonathan Majors, the latter, as the fearsome Kang, the Conqueror.

The film promises to bring the Ant-Man trilogy to a close, in addition to starting phase 5 of the Marvel Cinematic Universe. Its premiere will be February 17, 2023.

SHAZAM!, THE FURY OF THE GODS

Billy Batson has already learned the responsibilities of being a hero, now, together with the rest of his adoptive brothers, they must defend the city from Anthea, Kalypso and Hespera, the daughters of the god Atlas, who will try to seize the power that was given to them. awarded to Shazam.

The film will again feature the performances of Zachary Levi, Asher Angel, Jack Dylan Grazer, among others, where Rachel Zegler, Lucy Liu and Helen Mirren will also join as the antagonists of the sequel. The premiere will be March 17 of 2023.

GUARDIANS OF THE GALAXY VOL. 3

Before leaving as executive director at DC Studios, James Gunn will say goodbye in a big way and for this, he will use the Guardians of the Galaxy who will unite, one last time, to face the High Evolutionary, in addition to discovering the dark past that surrounds to a team member.

With songs from the eighties and lots of action, the film promises the final closure of the saga, which since its inception has starred Chris Pratt, Zoe Saldaña, Dave Bautista, Vin Diesel as Groot and Bradley Coopper as Rocket. The tape will arrive on May 5, 2023.

SPIDER-MAN: ACROSS THE SPIDER-VERSE

Miles Morales returns once again to show us how to take a leap of faith, this time the young Spider-Man will embark on an adventure through the Spider-Verse, where he will meet other different versions, the friendly neighbor of New York. Likewise, he will assemble a team to stop a powerful villain.

The sequel to the Oscar winner was scheduled to be released in April 2022, but due to problems related to the health emergency caused by COVID-19, the release date was changed, to June 2, 2023.

Since its pre-production, this film was full of controversies, there were many director and story changes, its protagonist, Ezra Miller, faced several legal problems and equally many characters had to be removed from the film.

However, it seems that the film could reorganize all the existing continuity of the DC Extended Universe, so we look forward to its release, which will be the June 14, 2023.

Marvel Studios will end the year with a high bar, since The Marvels promises a unique dose of action and comedy. Captain Marvel will be back to take on the tyrannical Kree empire, but she won’t do it alone, as Kamala Khan and Mónica Rambeu will team up to stop these aliens.

Brie Larson, Iman Vellani and Teyonah Parris will reprise their roles again, from other Marvel Cinematic Universe productions, in addition, Zawe Ashton and Park Seo-joon join the cast. The premiere of the film will be on July 28, 2023.

DC Studios will try to reach the Hispanic public, by introducing us to Jaime Reyes, who in the comics is the third bearer of the mantle of Blue Beetlethe plot of the film is currently unknown, but among its cast we find Xolo Maridueña, who became famous for the series of Cobra KaiIn addition, the Mexicans Adriana Barraza and Damián Alcázar. Its premiere is scheduled for August 18, 2023.

It seems that Sony Pictures never tires of making solo movies of Spider-Man’s enemies, we recently saw Morbius and Venom, now it’s time to introduce us to Sergei Kravinoff, better known as Kraven the Hunter. Very little is known about the film, only that the person in charge of giving it life will be the actor Aaron Taylor-Johnson, whom we saw in 2015 as quicksilver. The film is expected to hit cinema screens, the October 6, 2023.

AQUAMAN AND THE LOST KINGDOM

Finally, to close the year with a flourish, the “King of Atlantis” returns to protect the seven seas from a new threat. Jason Momoa, Amber Head, Willem Dafoe, Patrick Wilson and Yahya Abdul-Mateen II return to their iconic roles, led by filmmaker James Wan, which promises dazzling action and special effects. They will arrive at Christmas 2023, that is, December 25.

It may interest you: The most anticipated releases of 2023

Previous Kidnapped medical student, for whom they demanded 300,000 dollars in exchange for his release, was found by the Police
Next The Last of Us: Neil Druckmann Explains Why Sam Raimi’s Movie Was Canceled