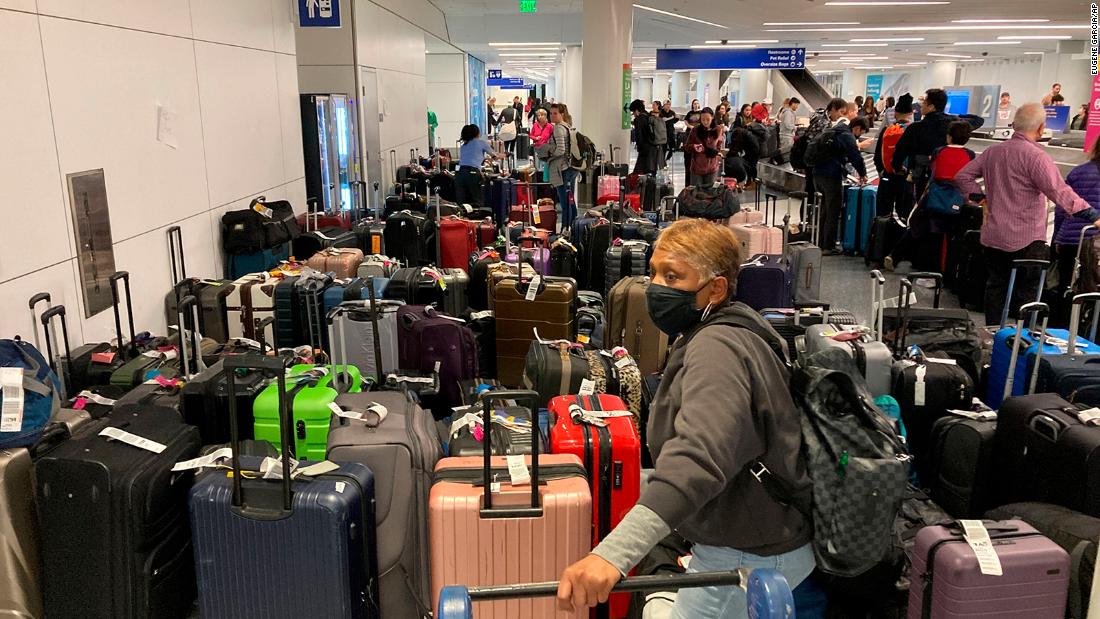 Thousands of flights canceled and delayed in the US due to winter storm 3:38

(CNN) — Thousands of travelers in the United States hoping for clear skies this Tuesday after a disastrous week of flight cancellations and delays due to weather, will have to extend their patience a few more days, especially if they fly with Southwest Airlines.

More than 2,680 flights within, to or from the United States have been canceled Tuesday as of 12:15 a.m. Miami time, according to flight tracking website FlightAware.

Of those canceled flights, 2,460 are operated by Southwest.

Tuesday’s cancellations follow a full day of post-Christmas travel chaos, when 3,984 flights were canceled Monday, 2,908 of which were Southwest flights.

Southwest has warned that such cancellations and delays are expected to continue for several more days, and representatives say the Dallas-based carrier plans to reduce its flight hours to get operations back on track.

Southwest Airlines CEO Bob Jordan told The Wall Street Journal that the company plans to operate a little more than a third of its schedule in the coming days so crews can fill the right positions.

According to WJS.com, Jordan added that the reduced hours could be extended.

“We had a tough day today. In all likelihood we will have another tough day tomorrow as we get out of this,” Jordan said in an interview Monday night with WSJ.com.

“This is the largest scale event I’ve ever seen.”

How is 2023 projected for airlines despite the shortage of pilots? 0:47

What can stranded passengers do?

He reported that around 150 customers were waiting in a long line at one point to rebook, with the line snaking around the back of the ticket counter.

Calls made Monday afternoon by CNN to Southwest customer service were unsuccessful, so customers couldn’t even get in line to speak with a representative. Southwest told CNN that it is “fully staffed to answer calls.”

The airline also says that “those whose flights have been canceled can request a full refund or receive a flight credit, which does not expire.”

If you’ve been stranded by canceled flights and your efforts to contact a customer service agent are going nowhere, the founder of Scott’s Cheap Flights suggests trying an international number.

“The main US airline hotline will be overwhelmed with other passengers who will have to rebook. To quickly reach an agent, call any of the airline’s dozens of international offices,” Scott Keyes said.

“Agents can handle your reservation in the same way as those in the US, but there’s virtually no waiting to get through.”

Southwest spokesperson asks passengers to “save your receipts”

“As the storm continued to rage across the country, it continued to affect many of our largest stations, so the cancellations piled up one after the other to 100, 150, 1,000,” Jay McVay said at a news conference in the William P. Hobby Airport on Monday night.

“With those cancellations and as a result, we end up with flight crews and aircraft that are out of place and not in the cities where they need to be to continue our operations.”

“We will do whatever it takes to correct the challenges we’ve had at this time,” he said, including “hotels, travel assistance, vans … rental cars to try to make sure these people get home as quickly as possible.” .

He promised that all customers, even those who had already left the airport or made alternative arrangements on their own, would also be served.

“If they’re gone, take care, do what you have to do for your family, save your receipts,” McVay relayed. “We will make sure they are taken care of.”

In an announcement made at the terminal before the press conference, he apologized to customers and said that SWA’s next available seats are for Saturday, December 31, and after. The agent said that Southwest would provide buses to area hotels and assured that “we will have enough rooms for all customers who are affected by this interruption.”

How is 2023 projected for airlines despite the shortage of pilots? 0:47

The federal government is “concerned” about flight cancellations

The United States Department of Transportation (USDOT) issued a statement regarding Monday’s mass flight cancellations by Southwest Airlines, saying the agency is “concerned.”

Meanwhile, in a call with CNN on Monday, Southwest Airlines Pilots Association President Captain Casey Murray said the problems Southwest is experiencing have been a long time brewing.

“We’ve had these problems for the last 20 months,” he said. “We’ve seen these kinds of crashes happen on a much more regular basis and really just have to do with outdated processes and outdated technology.”

When asked about the airline’s processes, he said they haven’t changed since the 1990s. “It’s the phones, the computers, the processing power, the programs that are used to connect us to the planes; that’s where lies the problem, and it’s systemic across the airline.”

A hard week of end-of-year festivities

A winter storm ripping through the US was not the right time for travelers who had begun to push holiday week flight numbers back toward pre-pandemic levels.

On Christmas Day, 3,178 flights were canceled and 6,870 delayed, according to FlightAware.

On Christmas Eve, a total of 3,487 flights were cancelled, according to FlightAware.

Friday was the worst day of this streak with 5,934 cancellations, while almost 2,700 cancellations were recorded on Thursday.