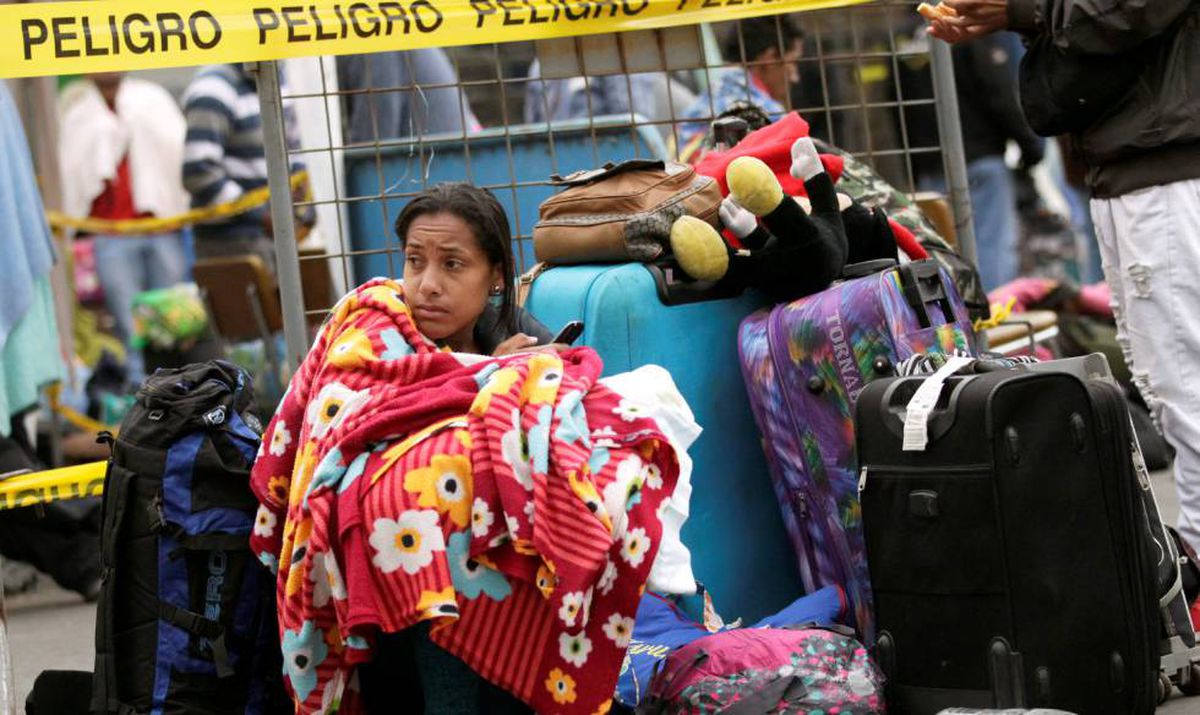 Rumichaca Bridge: Sexual violence and exploitation: the drama of the migrants who wait for the bridge between Colombia and Ecuador to reopen | International

The border was closed, but the migrants kept arriving. Those who have left Venezuela and have already passed through Colombia have not stopped their march south, despite the pandemic and mobility restrictions. Since March 2020, thousands of Venezuelans have been stranded on the Rumichaca bridge, which links Colombia with Ecuador, and although the presidents of both countries, Iván Duque and Guillermo Lasso, have announced the reopening, the crossing remains closed and every day What happens is another day of risk for women, victims of sexual abuse and violence, according to the international organization CARE.

“We come loaded with so much pain, anxiety and need, that all we want is to get to a place to feel safe, but when we arrive we face other problems,” reads a devastating report presented this Thursday on the conditions of migrants in this border. “100% of the cross-border women interviewed state that they have been victims of harassment on the street or sexual violence,” the document states.

Catalina Vargas, director of CARE Colombia, explains that many migrants, after being trapped in a border area, have fallen into human trafficking networks that camouflage themselves under job offers in food sales, in cafeterias. “Countries [Colombia y Ecuador] they are not aware of what is happening. Transactional sex is being the only way for women to access the minimum. Their freedom is restricted and they are suffering an enormous risk, ”says Vargas, who this Thursday presented on the Rumichaca bridge, accompanied by migrants, an agenda with the urgencies that must be addressed so that both countries guarantee women’s rights Venezuelan women.

The study, which identified the main problems facing migrants, was conducted on both sides of the border. Ipiales and Pasto, in Colombia, and Ibarra and Tulcán, in Ecuador. On neither side do they seem to be sure. At least half of the people consulted claim to have been a victim of discrimination and labor exploitation is an example of this: Venezuelan migrants receive 50% less salary than nationals in Ecuador (200 dollars a month with daily days of up to 14 hours ). In the case of Colombia, it is 55% less (eight dollars for ten hours of work).

Access to health services, which in itself is difficult for nationals of each country, is worse for migrants. Almost 90% of Venezuelans are in irregular conditions, which makes it difficult to achieve decent working conditions such as subsidies for public services, education and health.

Until March of this year, according to the International Organization for Migration (IOM), only 38% of the women and 26% of the Venezuelan men surveyed had had access to sexual and reproductive health services during the last year. . The Latin American country is home to more than 400,000 migrants from Venezuela.

According to the CARE report, 48% of Venezuelan migrant women in Colombia are at risk of being a victim of gender-based violence: “It has been identified through their stories that gynecological and obstetric violence occurs frequently from practices discriminatory and humiliating by health personnel ”.

Vargas says that it is difficult to give a unique profile of the women who are at the border waiting for them to open the way to enter Ecuador or to be able to continue on their route to Peru or Chile. “There are young people, many of them pregnant or with young children. Most of the mothers head of the family, aged 17 or 40, ”he points out. What they all have in common is their desire to get a job and to be able to help those who left in Venezuela. “His priority is to work, to send money,” says Vargas.

The agenda presented this Thursday by CARE, an international organization with a long history dedicated to protecting the rights of girls and women, recognizes that migration will not stop due to the closure of borders or the demand of increasingly complex requirements. Instead, he proposes that the basic conditions be improved to make their migratory route safe: more shelters and special protection against the presence of armed groups and criminal gangs that have control of the border area. It is impossible to say how many migrants need help and remain in limbo in front of a closed bridge. For more than a year on both sides of the border the authorities decided to turn around and leave them alone.

Previous Celaya vs Atlante (0-1): El Potro galloped away in the Semifinals
Next Aren’t the birds real? The Generation Z Conspiracy