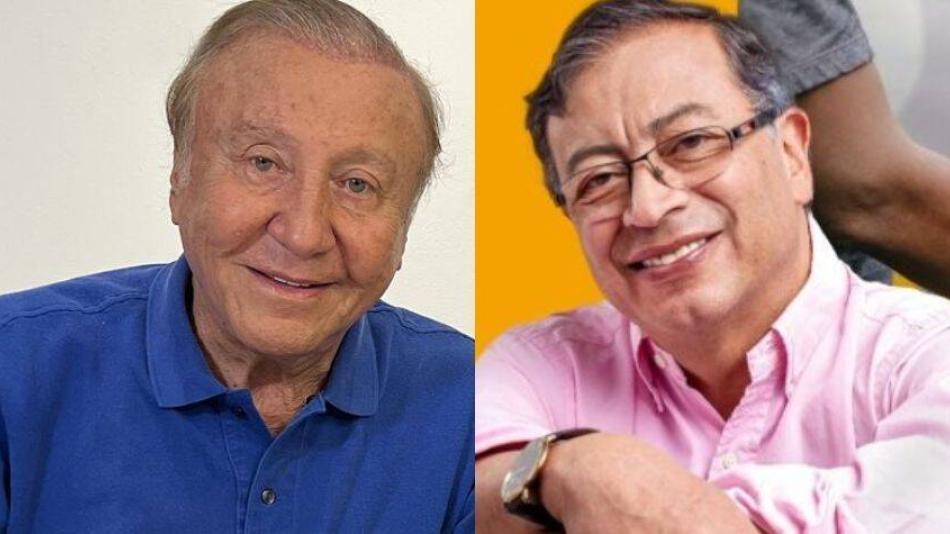 Politically empowered. This is how the presidential candidates Gustavo Petro and Rodolfo Hernández arrive at this second electoral round.

In 15 days, both managed to seal support and alliances with parties or factions of these, with which they hope not only to win but to obtain majorities in Congress. EL TIEMPO reviewed the last minute political line-ups and established how the board of power is and who would be the winners and losers on election day.

The independent candidate of the Anti-Corruption Leaders League, Rodolfo Hernández.

When Rodolfo Hernández announced his aspiration, on June 29, 2021, he indicated that he was going alone. He registered in the name of the League of Anticorruption Governors, of which politicians from Santander were initially part, who helped him gather 1,850,000 signatures.

As an independent He said that he would not negotiate alliances, but that he would receive support and that is how Ingrid Betancourt joined.

(You may be interested in: The 5 loose ends of the Petro campaign video scandal)

When he became the second most voted candidate in the first electoral round, with 5,953,209 votes, more support began to arrive, which was conditioned. “I accept the votes, but I do not negotiate with anyone,” insisted the candidate.

One of the first to land in Hernández’s awnings was the Conservative Party. After a call from its maximum head, Ómar Yepes, the latter publicly offered his support.

“Conservatism is committed to helping in this campaign because it is what guarantees the country the defense of democracy, freedoms and the free management of the economy,” said Yepes. And, behind that declaration there are 16 senators and 25 elected representatives that Hernández would count on to carry out his reforms in the legislature.

(On the topic: What is known about the threat of violent acts in 6 cities this Sunday?)

As for liberalism, it arrives divided, but nobody knows mathematically in what percentages. Its maximum boss, César Gaviria, has not formalized any support, which in the legislative field translates into 15 senators and 32 representatives.

The head of the Liberal party, César Gaviria, has not formalized his support, but several senators close to him support Hernández.

However, senators close to Gaviria, such as Mauricio Gómez Amín from Barranquilla (with 86,333 votes) and Karina Espinosa from Sucre (one of the most voted, with 121,921 votes) decided to support Hernández.

And although there is no official declaration of Radical Change either, records of the community of Germán Vargas They have already given their support to Hernández, which would mean the support of 17 representatives and 11 senators; among them, David Luna, who obtained 112,329 votes, on March 13.

(It may be of interest to you: The business in Colombia of Gustavo Petro’s advisor investigated in Spain)

The candidate Rodolfo Hernández received the support of Carlos Andrés Amaya. He could be his agriculture minister.

On the sides of ‘the U’, Dilian Francisca Toro, its head, announced that its militants and parliamentarians were being freed to opt for Hernández or Petro.

Among those who have already leaned towards the engineer is Juan Carlos Garcés Rojas (the senator with the most votes from that group, with 151,317 votes); Norma Hurtado from Bugueña (with 128,184 votes) and Juan Felipe Lemus Uribe from Antioquia (with 86,960 votes). This bench got 10 senators and 16 representatives.

The members of the Centro Esperanza Coalition, which was atomized, were also free to choose. The candidates Carlos Amaya (who received 451,122 votes) and Juan Manuel Galán (486,808) went with Hernández. On the sides of the Team for Colombia, Federico Gutiérrez, who obtained the third vote in the first round, and Enrique Peñalosa sang their vote for the engineer.

The presidential candidate of the Historical Pact, Gustavo Petro.

Rodrigo Londoño, head of the Partido Comunes, the former FARC.

In his third aspiration to the Presidency of the Republic, Gustavo Petro He came as a candidate of the so-called Historical Pact, which brings together 17 left-wing parties and movements, including the Communist Party, Polo, UP and Human Colombia.

(You may be interested in: The 6 names that Rodolfo Hernández has already launched on his eventual cabinet)

Although he got his own bench in Congress, from the first round, began to accept alliances with parties (such as Comunes, from the former FARC); and with senators who renounced their collectivities.

One of the first was Armando Benedetti, from Barranquilla, who was a member of the Liberal Party, then joined ‘la U’ and is now a Petrista.

Roy Barreras was one of the first senators from ‘the U’ who jumped into the Historical Pact.

Senator Roy Barreras from Cali, who began with New Liberalism, was a member of Cambio Radical and later in ‘la U’, also joined the Historical Pact.
On the Liberal Party sides, they are supporting the candidacy of Petro the outgoing senators Luis Fernando Velasco and Andrés Cristo. They assure that the liberal bases would be with Petro.

(Also: The past of the man captured for the disappearance of Adriana Pinzón)

Added to that list is the elected senator Piedad Córdoba, who came to the Pact at Petro’s invitation and also dropped out of the campaign at the instruction of the candidate.

Another member of the Liberal Party, Juan Fernando Cristo (who later joined the Coalition Esperanza Center as head of debate), also joined that cause, as two of his squires had already done: Guillermo Rivera (campaign manager of that coalition) and Luis Ernesto Gómez, former Secretary of Government of Mayor Claudia López.

The liberal Juan Fernando Cristo went from the Esperanza Center to the Historical Pact.

Christ, Rivera, Gomez and him too ex-liberal José Fernando Bautista (today with Petro) were part of the Santos government.

Among the Liberal elected representatives who sided with Petro are Dolcey Torres (58,794 votes); Eugenia Lopera (86,330) and Olga González (19,226 votes).
From the Esperanza Center there were other movements on that shore: Luis Gilberto Murillo (former vice-presidential formula of Sergio Fajardo); the pre-candidate Alejandro Gaviria and Jota Pe Hernández, the most voted senator of that coalition: 189,291 votes.

And members of the Alianza Verde (who were from Centro Esperanza) are now with Petro: senators Angélica Lozano (84,064 votes) and Ariel Ávila (97,470). And the representatives Katherine Miranda (118,540 votes) and Catherin Juvinao (45,852).

Also with Petro are former senator Ángela María Robledo, from the Alianza Verde, as well as former mayor Antanas Mockus and congressman Antonio Sanguino (who burned in the legislative elections).