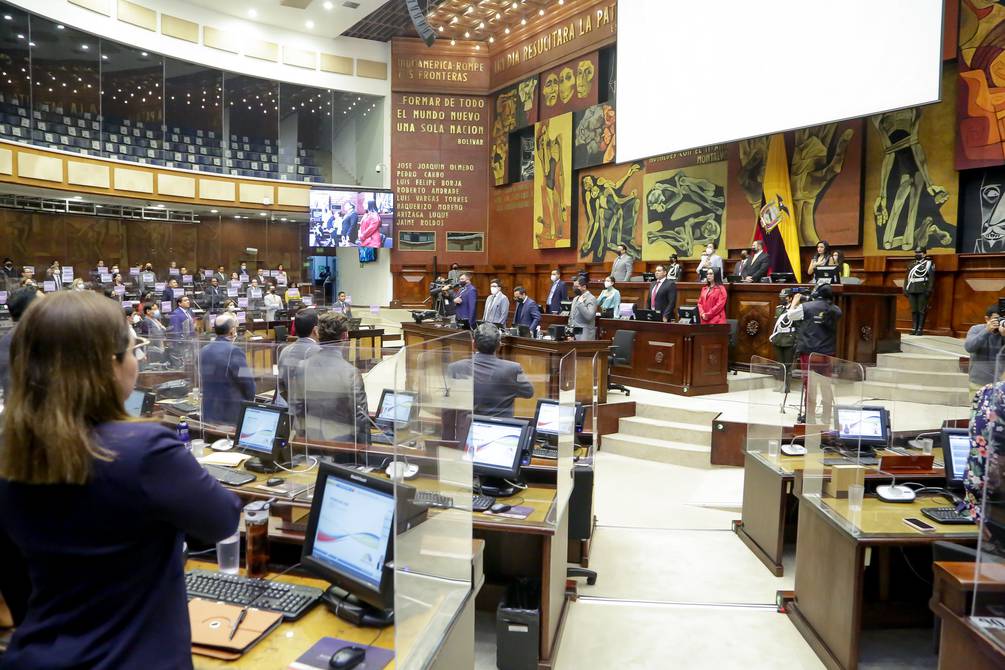 The report prepared by the Constitutional Guarantees Commission of the National Assembly on the case of the Pandora Papers faces a request for an urgent act to determine a possible commission of a crime of ideological falsehood.

The action was presented by former Assemblyman Andrés Páez, who explained that what he seeks is that the traces of a potential crime do not disappear, following the statements of the Assemblymen of Pachakutik, Edgar Quezada and Sofía Sánchez, that the report was not prepared in the Commission, but outside of it, and referred to the commission only to be signed. “The correista assembly members carried it, in their hands (Paola) Cabezas carried it, so that they could sign it in the Assembly.”

On November 5, the table approved with six votes the report on the investigation carried out on Pandora’s papers, which is a file leak published by the International Consortium of Investigative Journalists (ICIJ), which reveals the registry service and administration of companies and trusts in countries that are considered tax havens, where the President of the Republic, Guillermo Lasso, is appointed.

That report determined that the head of state failed to observe the ethical pact approved by popular consultation in 2017, consequently a breach of the prohibition of having assets and money in tax havens.

After its approval, Quezada publicly assured that the final report on the Pandora Papers underwent modifications in the last second of its approval, since initially they had agreed in their bench that they were going to leave the full Assembly to decide, because there is not a single document that supports the first recommendation related to the breach of the President of the Republic to the ethical pact. That assertion was corroborated by Sánchez.

Páez pointed out that Quezada himself told the press that the committee analyzed a document other than the one that was finally sent to the president of the National Assembly; In addition, the two legislators from Pachakutik complained because the president of the commission did not allow a debate; that is, they did not intervene in the formulation of the report.

In the urgent action presented to the State Attorney General’s Office, Páez requested the assignment of a criminalistics expert from the Judicial Police to determine whether or not this report exists on the computers of the legislative commission, if on the computer of legislator José Cabascango , its president, the secretary of the table or an advisor the report was constructed. With this, it will be possible to demonstrate if the report left the commission or entered from outside it.

This judicial action will allow the evidence to be preserved before they disappear, noted Páez, who said that the request was made under article 583 of the Comprehensive Penal Code.

Whether or not the report sent to the presidency of Parliament coincides in its content with any draft report or with the text of the final report that appears on any of the computer equipment of said committee, and must determine the date, time and equipment on which such documents were produced or if they were inserted into them after November 8, 2021.

Quezada said that it will be the Prosecutor’s Office that determines whether or not to give way to the urgent act, and it was ratified that the report never included the recommendations, that when they were notified for the session they were never included, which is what should have happened before their approval.

The questions that remain floating in the air, Quezada added, are how the recommendations were included, who wrote them and in what way, because there were no meetings between Pachakutik, and they are not in the report that appears in his email.

Someone should have written those recommendations, Quezada refuted, but insisted that it was not Pachakutik, and that the president of the commission must answer for that. If the Prosecutor’s Office requires the information, the legislator said that he will deliver it and will even give his email so that they can verify how the document reached the assembly members.

Gruber Zambrano (before PSC) ratified that the report is not constitutional, that there is no evidence to establish a ground for the removal of the first president, and affirmed that the president of the commission, José Cabascango, was influenced by UNES legislators, who they want to destabilize the country.

He said that at the last minute of approval the report was maneuvered, and assured that this report was made by the UNES assembly members with the president of the commission and his advisers.

Faced with the question of who made the report’s recommendations, Zambrano said that it must have been the UNES assembly members, because “they are the ones who spoke all day into the commission’s president’s ear, while the committee’s report was being read. most”. (I)