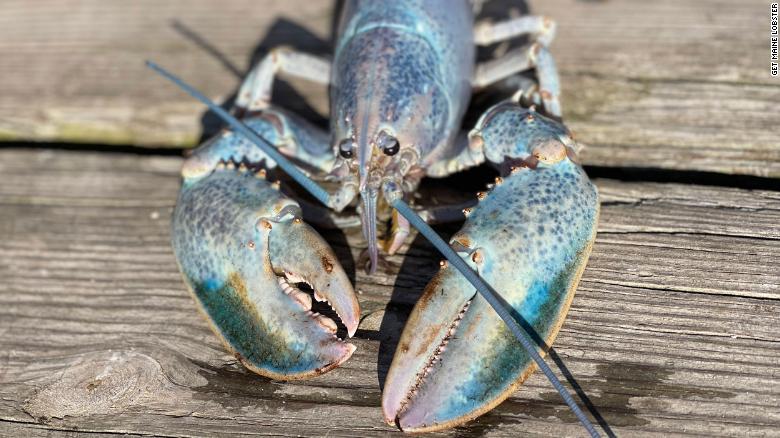 Orange lobster is saved from being eaten by its color 0:44

(CNN) – “Cotton candy” is one of the last words that most people would use to describe a lobster, but there is one special crustacean that fits that description.

Haddie, a rare lobster the color of cotton candy, was caught in Maine earlier this week. Unlike a normal dark brown lobster, Haddie features iridescent blue and pink hues on her body.

Haddie, a rare cotton candy-colored lobster caught off the coast of Maine, has a much lighter hue compared to regular lobsters.

This is the first cotton candy lobster caught by a Get Maine Lobster lobster boat, said Mark Murrell, the company’s CEO.

The odds of catching this rare animal are 1 in 100 million, according to Murrell.

Coppersmith is no stranger to catching unique lobsters. He has previously caught orange and white lobsters and, like Haddie, named them after his grandchildren.

Haddie’s special coloring is due to a genetic mutation, according to Murrell.

Proteins that bind to astaxanthin, the carotenoid base pigment, give lobsters their brown and green colors, said Chris Cash, deputy director of outreach and communication for the Lobster Institute at the University of Maine in Orono. Overexpression of the protein creates the bluish color, he noted, which is the main one in Haddie.

Humans may be captivated by pastel hues, but this poses a risk to lobsters in the wild.

Crustaceans with unique colors have a harder time integrating into their natural environment, making it easier for predators to spot them, according to the Maine Lobstermen’s Community Alliance.

Luckily, Haddie is now safe from both ocean predators and humans.

Blue lobster is saved from being eaten and goes to the zoo 0:57

The special lobster was adopted and will be transported to the Seacoast Science Center in Rye, New Hampshire.

When looking for an aquarium to take care of Haddie, “it was about finding the best place for her to live the rest of her life in safety and comfort, and the Seacoast Science Center can offer just that,” Murrell said.

Lobsters can live for a long time in captivity as long as the water is clean and well oxygenated, Cash explains. The animal must also have access to sufficient food and shelter, he noted.