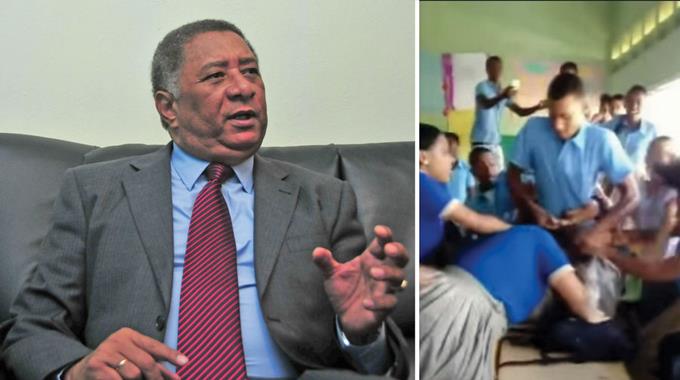 The behavior that many students are showing in Dominican schools is worrying not only teachers, but society as a whole.

And it is that as a result of having circulated a video on social networks, in which some students showed part of their intimacies, more than one story is already heard about the situation that exists in educational centers.

Some attribute the case to the permissibility that is accepted in schools, where a student can no longer be sanctioned and disciplined for their bad behavior, which gives them the opportunity to continue repeating it. Others understand that it is a reflection of what they live and see in society.

“There is a great indiscipline, they are very disorderly, they neither respect themselves nor respect the teacher, they are not considering each other, there is a lot of violence,” says a woman who withholds her name. She was selling snacks and sweets in a school and the behavior that her students were experiencing forced her to suspend her business when one of them even slapped her because she did not want to give him a sweet.

The aggressions of the students towards the teachers range from insults to aggression with objects. “One threw a shoe at her teacher, but she couldn’t fail,” complained the woman, who understands that a child cannot be asked to give something that they don’t learn at home.

Today educators also face the dilemma of whether or not to correct a student, because when they do, they find the affront of a parent who also shows up at school to claim why he burned or suspended him.

The situation keeps teachers and employees in a tense situation, because these children confront the teachers and they can not do anything. “It is too marked a violence, at such an extreme level that the other day a girl brought a toy cuté, it seems that they started playing with another boy and the cuté broke his head, the boy took it and entered it. a pencil and injured a classmate with whom he began to fight and they gave him 10 points, “the woman said indignantly. But for Luis, who is a teacher at a center of excellence, what is happening today in schools is a pure reflection of society. “You don’t see those artists who get up on stage and take off the little blunt they wear one by one until they end up showing everything, they see that and they see it as something normal and they replicate it pin pun”, he says.

Although scenes of violence are not common in his center, he said that on one occasion in a school where a student worked, he punctured the 4 tires on the English teacher’s vehicle because he burned it.

Given this scenario, the psychiatrist and former president of the Dominican Society of Psychiatry and Sexuality, José Miguel Gómez, understands that these are patterns that adolescents are copying from other cultures and upload to the networks to seek social validation, which he attributes to a need to seek notoriety from the person involved.

It favored that the violence that is experienced in the classrooms be curbed with orientation programs carried out in the schools.

They are the models of influence, the adolescent with the identity crisis, feels the need for social validation and then they enter to belong to a social group and do any inappropriate behavior.

learn more
Impact
Gómez was also in favor of the student who engages in this type of behavior being separated from school for a while and undergoing therapy sessions so that he understands that when the rules are violated there are consequences.

“Students who have high-risk behavior at school, obviously the school has to establish consequences and they have to be separated from school for a while, undergo therapy sessions with a psychologist, do social work with the community, All this accompanied by the family, because if there is no system of consequences and nothing happens, the others will do it because nothing happens, “said Gómez.

It warns that this, if not controlled in time, can become harmful, both for the adolescent and for the family of the children involved, because the consequence could be the development of sexuality at an early age, teenage pregnancies, which is very high in the country.