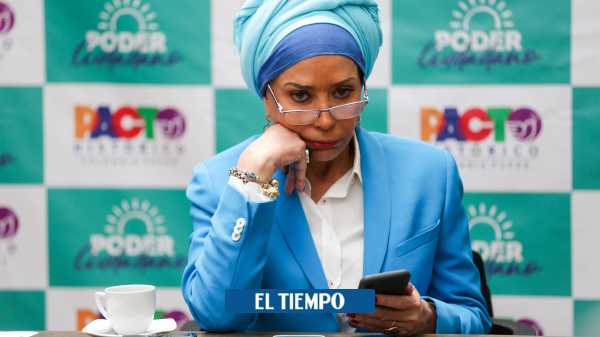 next August 7 Gustavo Petro will take office as president after being elected this Sunday in the second round of the presidential elections, and in addition to arriving with the union speech that he has held since his victory, he also does so with one of his bishops in legal trouble and still far from the campaign.

(Also read: Rodolfo Hernández: what comes in his investigation if he assumes as a senator?).

This is the elected senator piety cordoba.

(You may be interested: These are the names that sound for Gustavo Petro’s cabinet).

The former congresswoman has been away from the campaign in recent days at the instruction of Petro himself.

Piedad Córdoba in statements to the press before the election to the Senate.

It is not yet clear what role Córdoba will play as an elected congresswoman from the president-elect’s party and how her relations with Petro will turn out.

In fact, it is striking that he has not made any statement on his social networks. after the results of the second round. his last publication is from June 11.

Analysts consulted point out that on June 20, when Córdoba assumes his seat, it will be key to knowing what role he will play in the legislature against Petro’s proposals and if the relationship between the elected congresswoman and the elected president has overcome the latest differences.

On April 21, then-candidate Gustavo Petro asked Córdoba to suspend activities in his campaign until he resolves “the legal charges against him.”

At that time Córdoba appeared with remarks about his closeness to Alex Saab, alleged figurehead of Nicolás Maduro, and his handling of the release of hostages by the Farc, among others.

Against Córdoba there is a preliminary investigation in the Supreme Court for alleged links with the former FARC guerrilla.

In this case, testimonies have been heard that would have to do with the statements made by Andrés Vásquez, a former adviser of his, who said that Córdoba would be alias Teodora and that he deliberately delayed the possibility of releasing hostages as Ingrid Betancourt.

The Court has heard the testimony of Betancourt, Álvaro Uribe, Senator Iván Cepeda, journalist Daniel Samper Pizano, and the former commander of the Farc’s Southern Bloc, Milton de Jesús Toncel, known as Joaquín Gómez, among other people. Córdoba’s own statement had been cited but she did not attend the appointment in court.

In addition, a report from the Judicial Police was provided in the file on January 13, detailing all the electronic devices seized in military operations and prosecuted by the Prosecutor’s Office, including the elements found in the Sodoma operation, in which he was killed. Victor Julio Rojas, aka Mono Jojoybetween September 22 and 23, 2010.

(You may be interested in: Piedad Córdoba: this is how the investigation against her has moved in the Supreme Court).

For now, the Court continues to evaluate the elements collected so far to determine whether to open a formal investigation against the senator-elect or file this process.