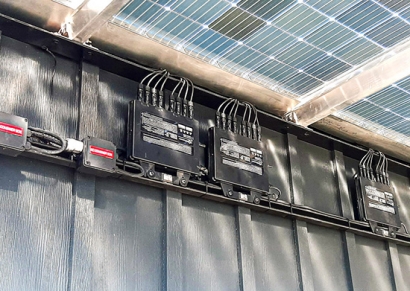 However, the real environment is complex and variable, and the power output of the modules is always affected. Due to various factors (detailed later), some losses will inevitably occur, so the module’s output power always ends up being less than its STC power rating. The factors that are likely to affect the output power of the modules are as follows:

1. Solar resource
Sunlight is the basis for the production of photovoltaic energy. Solar radiation conditions vary considerably depending on the region. The nominal output power STC of the module is only achieved under specific conditions of irradiance intensity of 1,000 W / m2, at a temperature of 25ºC and with a spectrum of AM1.5.

When the irradiance is less than 1,000 W / m2, the output power of the PV module is less than its rated STC power (Figure 1). Even in areas with abundant solar energy resources, sufficient light conditions are not always present throughout the day, and irradiance varies considerably between morning and night (Figure 2). Likewise, when the temperature of the module increases, the voltage drop of the module decreases, but the change in current is minimal; therefore, the power of the module decreases when the temperature rises (Figure 3 – Figure 4)

2. Attenuation of the PV module
Based on outdoor dimming analyzes performed using NREL SAM software for more than 2,000 PV modules worldwide, the module dimming rate after the second year varies linearly. The attenuation rate at 25 years ranges between 8% and 14% (Figure 5). In reality, the energy production capacity of the modules decreases each year as the modules degrade.

4. Other factors
Soil, traces of salts (for example from the ocean), foreign bodies and shadows on the surface of the photovoltaic modules cause an internal mismatch in the modules. In addition to the degradation of the PV modules, it can happen that the DC cables and connectors wear out, and that the power consumption of the inverter decreases, which reduces the output power of the modules. Based on the analysis of the aforementioned influence factors, according to the traditional 1: 1 capacity ratio design, the maximum energy production of the photovoltaic system is less than its installed capacity, and a certain ratio of over-configuration of the components can Get to compensate for the loss of capacity of the inverter and improve the utilization rate of the converter. Figure 7 illustrates the inverter capacity factor and how it increases with a higher DC / AC ratio. The utilization rate of the inverter is called the capacity factor, and it is defined as the ratio between the actual energy production and the maximum energy production (when the inverter has been operating at full power, its capacity factor is 1.0) .

Simulation of energy production with oversizing of the PV module
To intuitively prove that module oversizing can increase energy production, we have chosen the Hermosillo region of Mexico (29.09 °, -110.98 °), and we have used the NREL SAM software to simulate power limitation and total energy production during the first year with different DC / AC ratios. Model configuration: Module selection. Efficiency module model (Temperature coefficient: -0.4% / ° C Pmp). The meteorological data belongs to the TMY3 collection; system loss: total loss is 1.5% (assumed); This model uses the QS1 from APsystems; this model is appropriate for any region.

Figure 8 shows the simulation results of different CC / CA ratios in the Hermosillo area. The figure shows that as the DC / AC ratio increases, the energy production of the system increases continuously, and the increased energy production always outweighs the energy loss due to power limitation. The figure is a simulation in conditions of optimal inclination of the module and with a true south orientation, and does not consider the attenuation of the module. In fact, the power limitation loss rate is lower.

Summary
The main objective of this article is to demonstrate the value of module oversizing. When analyzing the relationship between the following factors, it appears that the real output power of the modules is less than their nominal power. To improve the utilization rate of the inverter, the use of oversizing is considered the best practice. With the example simulation carried out with the NREL SAM software, the data obtained show that the increase in the DC / AC ratio translates into higher energy production. While there may be a power limiting loss, the increased energy production of the system outweighs the power limiting loss.

The optimal DC / AC ratio requires a global analysis of the benefits of system power production, system construction costs, operating and maintenance costs, and asset transformation (including module dimming, etc.) to be able to find a balance between the higher production costs and the revenues from the energy production of the system. A reasonable DC / AC ratio can increase system revenue, reduce system cost per kilowatt hour, and maximize overall revenue.

• This article was published in the November issue of the paper magazine. Here you can download the PDF of the number for free.

Previous The bag of cement at 1,500 pesos and the strip of rebar at 1,000: the Cuban hyperinflation in construction materials
Next alarm at PSG for the shocking injury suffered by the Brazilian