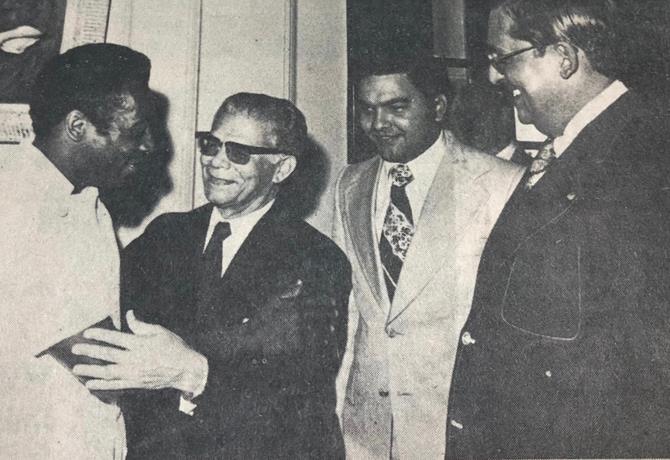 Pelé and his emblematic visit to the Dominican Republic

The Dominican Republic Through the years it has served as a tourist area for great figures of different kinds, one of them was Edson Arantes do Nascimento, better known as Peleconsidered one of the best soccer players in history.

Pele he stepped on Dominican soil on June 2, 1976 with the primary purpose of participating in the game between Violette Haiti (VAC), one of the most renowned teams in Haiti, and the New York Cosmos.

His landing was at the International Airport of the Americas (AILA), where he was warmly received by the selectee of the Círculo Deportivo Militar, the public relations officer for the J. Armando Bermúdez firm, Johnny Morales, among others.

The soccer star, after his reception at AILA, prepared to exhaust the match that took place at the Olympic stadium from this city.

For the historic game, thousands of Haitian and Puerto Rican fans traveled to the country on the day of the game to witness the event.

From the early morning hours of June 3, the foreign fans crowded the ticket office of the Olympic stadium, looking for their passes for the football match.

Some Haitian travel agencies organized trips during that weekend to take advantage of the dispute between the clubs.

The match took place on the night of Sunday, June 6, 1976 at the Olympic Stadium, and it is speculated that more than 24,000 people attended the meeting, a large number of foreigners.

The contest, which began on Sunday night, ended with a score of 2-1 in favor of the team “King Pele” who scored the decisive goal in it minute 42 of the second time.

The first goal of the night was scored by the VAC player, jean baptiste, who in minute 35 of the second quarter broke the goalkeeper’s barrier and gave the home number.

The second score of the night was carried out by Bob Rigby del Cosmos in the 41st minute, with whom I tied the contest.

reception of the president

The soccer legend, during his stay in the country, visited the current president, Joaquín Balaguer, who received him warmly in his office in the National Palace.

A year later the brazilian faced again against him Violeton that occasion the match was held in Haiti.

game of a legend

After a long career full of triumphs, football legend passed away December 29 in the city of sao paulo at 82 years of age.

The three-time world champion lost the most difficult match of his life, which took place off the pitch.

And it is that after dealing for several years with the effects of colon cancer that he suffered, Pelé left the earthly world.