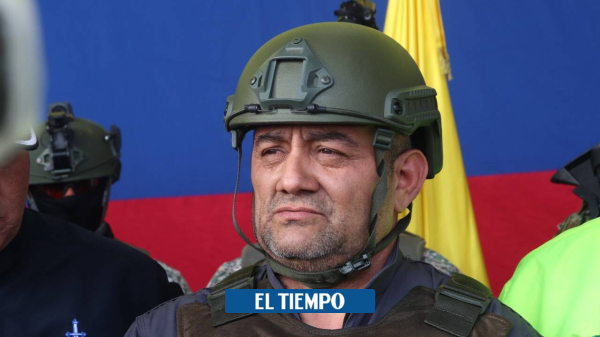 drug lord Dairo Antonio Usuga David, alias ‘Otoniel’, appeared this Tuesday before the judge instructing his case for drug trafficking in a New York court, to complain, through his lawyer, that he cannot speak to his family or receive correspondence.

(Also read: ”Otoniel’ is in severe prison conditions’: lawyer in the US)

In a procedural appearance in the presence of the prisoner dressed in the orange jumpsuit of US prisons and with a mask, his lawyer Alexei Schacht claimed Judge Dora Irizarry that last month your client was unable to make the monthly call to a family member or close friend to which he is authorized.

He also does not receive traditional mail, not even documents “necessary for the case,” he said.

The prosecution argued that an electronic device with documents in Spanish, the content of which has yet to be determined, has been found in his possession. Otoniel, who may have a computer, does not have an internet connection.

The next hearing is scheduled for October 18 and it is hoped that then a date can be set for the trial of the Clan del Golfo capo, whom US justice will judge for “continued criminal enterprise” and “conspiring to manufacture and distribute cocaine ” Since the third charge, use of weapons for drug trafficking, was dismissed because it is not included in the terms of the Colombian’s extradition.

(Also: Why did alias Otoniel change his lawyer, a month after landing in the US?)

This is the first known image of alias ‘Otoniel’ upon his arrival in the United States.

Also known as “Mao”, “Gallo” or “Mauricio Gallo”, if convicted he could be sentenced to life in prison. His sister, Nini Johana Úsuga, alias “La Negra”, was extradited on July 1 to Florida (United States) to also answer for drug trafficking.

Brooklyn federal court prosecutor Breon Peace said of him when he was extradited in early May that he is one of “the world’s most dangerous and most wanted drug lords.”

Since his extradition, in Colombia, the Clan del Golfo has killed twenty policemen in a show of force in the face of a possible negotiation with the next government of Gustavo Petro, who takes office on August 7.

The future president had proposed “legal negotiations” so that the drug trafficking armies hand over their weapons in exchange for criminal benefits.

Who is Nancy Pelosi, the US politician challenging China?

Daniela Montemayor, the Mexican quinceañera who died at her birthday party