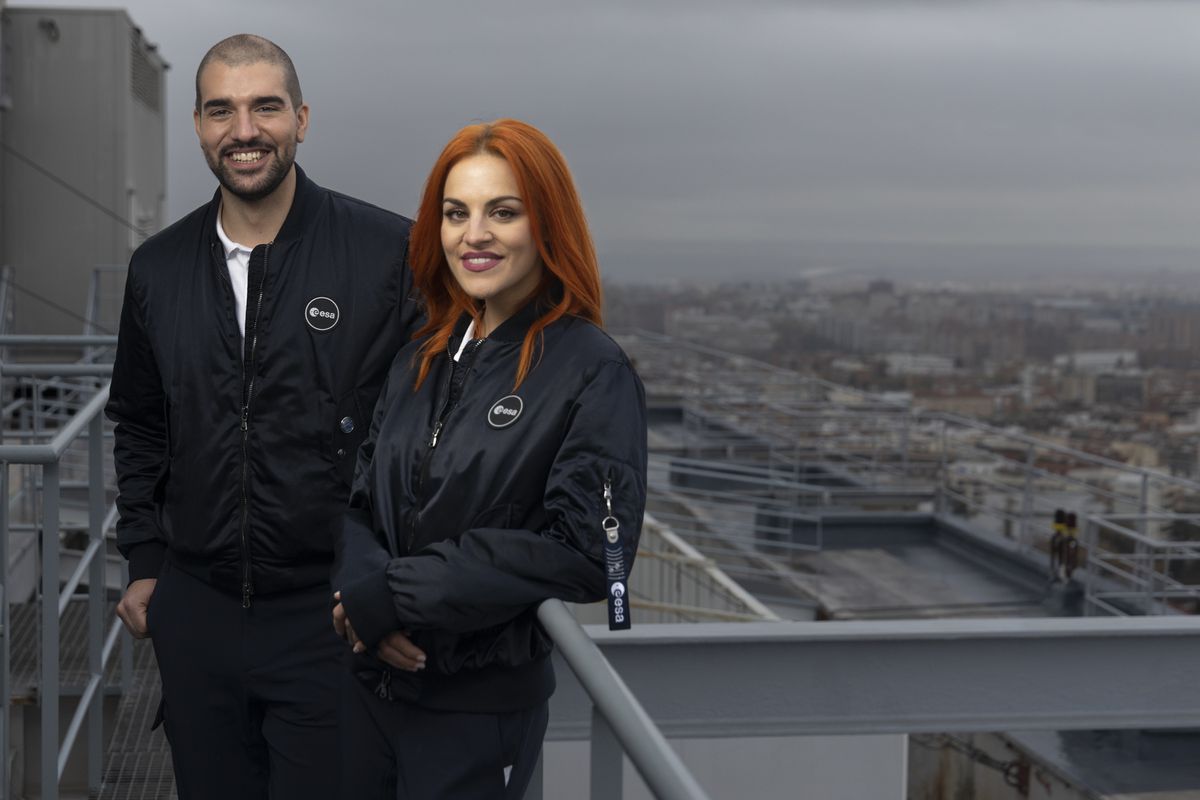 New Spanish astronauts: “We dream of going to the Moon, but we won’t get to Mars” | Science

Sara García and Pablo Álvarez are 33 years old and were born in the same city —León— 17 days apart. They went to schools that were one street away and studied at the same University of León. They must have met in the same bars and cheap pizza places; but the truth is that they did not meet until a few months ago, when they found out by chance that both were in the final stages of selection to become astronauts for the European Space Agency (ESA).

During a year and a half of selection they have not had a name, only an identification number, to avoid bias or favorable treatment during examinations, medical, psychological, physical tests and relentless interviews in which professional astronauts decide if they would share with them the narrow cabin of a spaceship for six months. 22,500 people from all over Europe took part in the tests, a historical record. Yesterday, Pablo and Sara learned that they are among the 17 chosen: Pablo as a starter and Sara as a reserve.

The first two Spanish astronauts in 30 years come from humble families rooted in towns with a few inhabitants in the regions of Omaña, Boñar and El Bierzo. Pablo is the son of a funeral service worker and a cook. Sara, from a cabinetmaker and an administrator. They are both the first generation of their family to go to college and now they may be going into space.

Pablo majored in engineering because of his love of airplanes and “anything else that flies.” I would never have been able to be an astronaut if ESA had not decided to modify the rigid physical requirements in force since before NASA’s Apollo program’s mythical trips to the Moon in the 1960s. All space explorers had to have perfect joints, but Pablo He has a slight disability in one ankle where he does not have full mobility. That hasn’t stopped him from running half marathons, playing soccer and representing Spain and winning several medals playing table tennis as a Paralympic athlete.

Last winter, ESA opened space to people with disabilities – para-astronauts. Pablo introduced himself and endured the long selection process. His huge surprise came on Wednesday, when they told him they were signing him as the starting astronaut. The disabled spot had been won by English surgeon John McFall, who lost his leg in a motorcycle accident at age 19, relearned to walk and run and competed as a Paralympic sprinter.

Sara has always been attracted to science, especially in something that “had an impact on society”. Since 2019, she has been leading a project to discover new cancer drugs at the prestigious National Cancer Research Center (CNIO). When in February 2021 the ESA announced that it was looking for new astronauts, especially women, and looked at the requirements —having completed a science degree, having languages…— he realized that this profession was “what he had been looking for all his life ”.

I don’t expect to meet God in space, but I think it must be a tremendously overwhelming feeling.

On April 1st, Pablo will begin his one-year basic astronaut training. He will then spend another year of specific training to serve on the International Space Station, the base that orbits the Earth at about 400 kilometers. Afterwards, he will wait for them to assign him a mission and when they do he will train another two years until he learns each procedure and each movement “as if he had it written in his DNA.” The space station is an unavoidable first destination for every European astronaut. Later, if there is luck, space in the ships and money for the missions, it is possible that he can travel to the Moon.

As a reservist, Sara will continue working at the CNIO. She will undergo annual medical examinations and will be prepared in the event of a mission promoted from ESA or from Spain. So, she would enter a training similar to the one in the headlines, although somewhat shorter. “For reserves there is no set order,” she explains. “It depends on the opportunities that arise and are generally promoted by the country itself. If tomorrow Spain wants me to fly, and can support it financially, I could go directly to being a career ”, details the molecular biologist.

Since they were presented in public on Wednesday, their life has been a whirlwind. The Minister of Science, Diana Morant, put them on her flight and brought them to Madrid, where they have not stopped doing interviews and taking photos with anyone who asks them to, including many employees of the Ministry of Science who this Thursday recognized them by the hallways. They are kind, patient and never lose their cool, essential requirements for what comes their way.

Ask. When was the first time you thought about being an astronaut?

Pablo Alvarez. The first time I dreamed about it, I would be three years old. The first time I thought, watch out; this is serious, it was four months ago, during medical tests in Toulouse (France). They began to measure me to see if I would enter a Soyuz spacecraft. The height limit was 1.90 meters. They measure the width of your legs sitting down. If I had a centimeter more from side to side of the calves I would not enter and they would have discarded me. I measure 1.87. If I finally go to space, I’ll be one of the biggest astronauts to ever fly.

Q. What has been the hardest part of the 18 months of testing?

Sarah Garcia. Enduring the whole process, the waiting times, wondering if they will call you to the next phase or not… You are trying to prepare for something that you cannot prepare for. But we tend to analyze everything, to imagine all possible scenarios and prepare for it.

P.A. There have also been very bloody questions in the interviews. We have a confidentiality agreement and I can’t say them, but some of them were really terrible. They dig into your mind even emotionally, I suppose to see if you have the wood they are looking for. How do you deal with it? I suppose trying to appear calm and answering everything in the most logical and diplomatic way possible, without losing your temper and composure, despite the fact that they push you to the limit.

Q. Sara, right now there is only one active female astronaut in Europe. What does it mean that among the 17 selected there are almost 50% women?

SG The numbers speak for themselves. Only 25% of the candidacies were from women. It is important to remember that we have been numbers. Even when we were already elected in Paris, we and the ESA people themselves did not know our names, they only knew our identification numbers. In the end it is shown that women are just as capable as men. We can all develop this type of work and the figures show it.

Q. What mission would be your dream?

P.A. Go to the moon. It is something we can aspire to with the technology we have today. But for that, you first have to go to the space station a few times, get trained and be very expert in what you’re doing. In the end there are not that many missions to the Moon, they are expensive and we have to make sure that every euro invested in them returns to society in the form of technological developments. We are not here to burn money. It really is an investment that has its impact on Earth. We have to prepare everything, learn everything we need and develop the technology so that a next generation of astronauts can reach Mars.

Q. Do you think that it will not be your generation that reaches Mars?

SG No. First the robots have to arrive. You have to work on it, you have to develop it and then the humans will come.

Q. Are you afraid of going into space?

P.A. I don’t know if it’s the best example, but I remember an interview with a bullfighter that I heard when I was little who said: “The only thing I’m afraid of is a bull.” Of course I am afraid of the rocket because it is very dangerous, but you have to find a way to use that fear to be as prepared as possible. Fear generates the adrenaline you need to have that extra energy you need to be prepared for any eventuality that may arise.

Q. Many astronauts who have traveled in space are impressed by seeing the distant and tiny Earth and it makes them realize how insignificant we are within the universe. Others have found God. What do you expect?

P.A. I don’t know what I’ll find. And this is a bit like the work of an astronaut, exploring the unknown. Simply, you have to get to that border and see what is on the other side. God I don’t think he shows up but if he does you’ll be the first to know [risas].

SG I don’t expect to meet God in space either, but I think it must be a tremendously overwhelming feeling. Seeing you in nothingness, in space, exploring and entering the completely unknown, leaving behind your world, your civilization and seeing how small we are in relation to the rest of the universe. I suppose you have to experience a number of sensations at that moment that make you think about many things.

Q. Sara is a scuba diver, a skydiver, a specialist in Krav Maga, self-defense for the Israeli Army…

SG I love trying new things. I discovered Krav Maga in León precisely when I read the thesis. I find it a fascinating martial art because I like to try everything and here you have boxing, mixed martial arts, defense against a knife, against a firearm. I like to challenge myself: if something scares me, I face it.

Q. The starting astronaut salary is between 5,400 and 8,600 euros free of national taxes. What determines that they earn one figure or another?

P.A. We do not know. They put the contract in front of you two hours before presenting yourself. Imagine, a contract from a European tender. I’m not going to say I’ve read the whole thing. [risas]. We’ll see. In any case, it’s a job I’d do for free.

Q. What would you say to children and young people who see you these days and want to follow in your footsteps?

SG Perhaps they are not preparing to be astronauts, because there are no specific studies. We are at the starting point, now they have to teach us everything from scratch. There are a thousand ways that can make you become an astronaut. Here are two examples that are radically different. You have to be in a science degree, but above all, pursue what motivates you and do it with enthusiasm and enthusiasm, and explore everything that makes you happy and that brings you something and that you like.

Previous Netflix movies that show that losing a love is hard, but it is possible to recover
Next Neymar Jr. LEFT injured and could BE OUT of Qatar 2022 – SwingCompleto