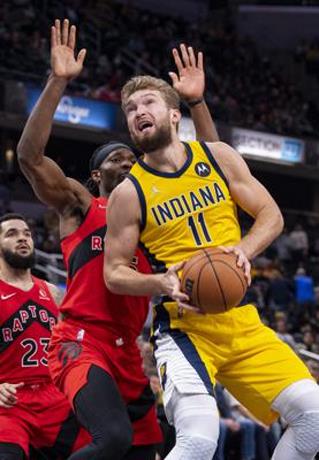 INDIANAPOLIS.- Domantas Sabonis achieved 23 points and 18 boards, and the Indiana Pacers beat the Toronto Raptors 114-97 this Friday, who did not have all their starters again due to injuries. Caris LeVert had 19 points for the Pacers, seven of whose players scored more than 10 points. Myles Turner finished with 17 points and 10 rebounds, Kelan Martin scored 15 points and Chris Duarte 12.

Malcolm Brogdon and Torrey Craig each scored 11 points for the Pacers, who led nine points at halftime and never faced a serious threat in the second half. Brogdon also had 12 assists and the Pacers outscored the Raptors 31-17 in this stat.

Fred VanVleet was the Raptors’ best offense with 26 points, including four triples. Scottie Barnes and Pascal Siakam finished with 17 points each.

The Raptors returned to play without two injured starters for the second straight game. For the Pacers, the Dominican Chris Duarte played 23:09 minutes, in which he had 12 points, six boards and an assist.

DENVER – Giannis Antetokounmpo scored 24 points and grabbed 13 rebounds, Pat Connaughton had 20 points off the bench and the Milwaukee Bucks defeated some injured Denver Nuggets 120-109 on Friday night to chain their sixth win.

Antetokounmpo made 10 of his 13 baskets in 30 minutes and the Bucks were never behind on the scoreboard in their third straight double-digit victory.

Aaron Gordon was the best of the Nuggets with 19 points and nine boards. Will Barton had 17 points and the Argentine Facundo Campazzo totaled 16 points, a rebound and two assists for Denver.

SALT LAKE CITY, Utah.- Devonte ‘Graham scored a triple with 1.9 seconds left that was worth the victory and the New Orleans Pelicans beat the Utah Jazz 98-97 this Friday.

Brandon Ingram had 21 points and six rebounds for the Pelicans. Nickeil Alexander-Walker had 15 points. Spaniard Willy Hernangómez finished with 13 points and eight boards.

Bojan Bogdanovic had 23 points and Donovan Mitchell contributed 16 and six assists for the Jazz. Mike Conley and Joe Ingles had 12 points each.

After going down 11 points in the first half, the Pelicans took flight in the fourth quarter and were up 91-85 on a layup by Herbert Jones with 4:45 left.

The Jazz regained the lead with back-to-back baskets from Mitchell. Conley followed with a layup and Rudy Gobert hit a free throw that had put Utah up 97-93 with 37.5 seconds left in the game.

Previous Precious: Carmen Villalobos fell in love with everyone with her dress
Next Academy of Medicine awarded the 2021 National Grand Prize for Medicine